Kilifi Governor Amason Kingi is a political heavyweight who does not bow to criticism. He was in the spotlight over graft claims involving the procurement of his official residence that reportedly cost Sh140 million, but was cleared of any wrongdoing. He spoke to JECKONIA OTIENO about politics, development and devolution

What is your game plan for 2017? My game plan is to win the elections and that will be easy. In 2013,  I had stronger opponents than I have now, so the numbers do not really scare me. Looking at the calibre of those intending to oppose me, I am not really worried. Since I became governor, I have achieved a lot for Kilifi people  despite all the challenges.

Do you think Jubilee leaders are winning over Coast voters?

Nothing can be further from the truth. I think we have received many ‘tourists’  in the name of politicians aligned to the Jubilee party coming to enjoy our hospitality. This, however, should not mean the Coast is  supporting Jubilee. In fact, we need them to bring income to our hotels.

I am happy they are  promoting domestic tourism. Politically, the ground has not moved even a single bit. The biggest mistake is ‘them’ attacking individual leaders like MPs and MCAs.

Why do you think the Coast region is a hard nut to crack for Jubilee? There is a reason why Coast residents rejected Jubilee and voted Cord. The reason didn’t end with casting of votes in 2013. It runs deeper. Jubilee stands no chance at the Coast. However, we have no problem with them coming to enjoy our hospitality.

For years, many in the region have felt marginalised. What are your thoughts? Marginalisation is a thing of the past, thanks to the enactment of the new Constitution. With devolution, resources have been devolved  and the same applies to powers.

We now have governors, senators, MPs and MCAs. Further, the president no longer enjoys the enormous powers he had. At least, devolution has ensured equitable distribution of resources and residents no longer feel ‘left out’. The song of marginalisation is slowly dying.

What about past historical injustices at the Coast?

We want historical injustices addressed now. These past mistakes must be cleansed for us to start on a clean slate. For this to happen, we need a national government responsive to those ideals.  Unfortunately, the government  does not share these ideals that are so close to the hearts of the Coast people.

Land is a big problem at the Coast. Do you think the government is taking the issue seriously?

The government needs to speedily bring about the enactment of a law to address land injustices. We have no laws in place. How then do we solve the problem?

Do you think Mps drawn from Coast are doing enough to ensure devolution is a success?   The MPs have failed. They have not made a case for devolution. There is 85 per cent of national revenue still stuck with the national government.

The people who should ensure money trickles down to wananchi are the people who wait for the president at State House to pose for pictures. Some of the MPs spend more time in State House than in Parliament. They should be initiating debates that will help the residents.

Talking of development, what are you doing to develop the fishing industry in Kilifi? It is sad that the spirit of the East African Community is being negated by Tanzanian fishermen being arrested. If those fishermen were from non-member states, then we would have a stronger case.

Unless, of course,  they did not have licences. We are training our fishermen not to depend on foreign fishermen. We are building the capacity of our fishermen to go into the deep seas, just like the Tanzanian fishermen.

What is your take on Moses Kuria’s ‘Punguza Mzigo’ initiative to reduce the number  of counties from 47 to 16 and scrap the senate?

We wanted a three-tier government. What we have now is a total mess. Here, we have a two-tier system of national and county governments.

What we need to go for is a federal system where we have one nation and eight states with the 47 counties intact. It is the number of representatives that need to be reduced and one of the ways is to reduce the constituencies. We need to overhaul the entire government structure.

Kilifi county has been facing water problem for years, have you addressed the issue? In my budget, water comes second after health. We have initiated a number of water projects and more homesteads have water. Before my term comes to an end, I want to ensure that the water problem in Kilifi is a thing of the past. I want to ensure residents have access to safe, clean water. 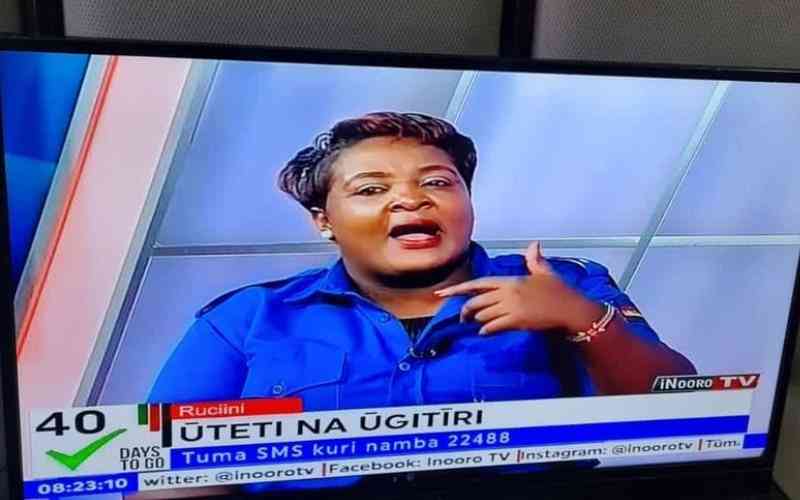 Female police imposter arrested at Inooro TV
News
By Vincent Kejitan
40m ago
Bahati: Sifuna will cost Raila the Mathare vote
News
By Vincent Kejitan
2h ago
Deafness in marriage is not a deal breaker, Samm Komorah shares his experience
Showbiz
By Davis Muli
3h ago
New documentary 'The Princess' immerses audiences in Diana's story
Arts And Culture
By Reuters
4h ago
Fireboy DML makes history with first Afrobeat debut performance at the 2022 BET
Showbiz
By Tamarah Patience
22h ago
.