How Uhuru, Ruto and Raila sons spent millions in a nightclub 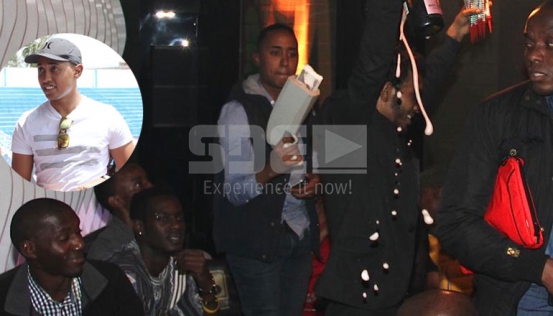 Early this year, President Uhuru Kenyatta’s son, Muhoho Kenyatta, was trending after allegedly spending over Sh1 million at a nightclub.

Heads Up has now learnt that Muhoho who was accompanied by his girlfriend, Firyal Nur Al Hossain, who is Foreign Affairs and International Trade CS Amina Mohammed’s daughter and gave away money to revellers.

“Most of the beneficiaries were the waitresses who came to collect the money from the floor. Muhoho was drinking Moet et Chandon with Deputy President William Ruto’s son, Nick Ruto and opposition leader Raila Odinga’s son, Junior. They had over 50 bottles, most of which ended up on the ground,” our source said.

The thought of having these photos published had Muhoho’s handlers in a panic mode.

They made phone calls to various media houses asking them not to publish the photos. The heat was so much that even a senior security official was making calls to media houses.

This is not Muhoho’s first controversial incident. Two years ago, he was seen hugging and exchanging saliva on camera with a daughter of a senior politician.

A few months ago, he was a captured smoking with his girlfriend, Firyal.

Muhoho is a fashion designer and has lately been involved in philanthropic work like visiting the sick in hospitals.