Justina Syokau, a popular gospel musician who rose to public limelight this year after releasing her hit song Twendi Twendi, is talkative. Private or public, Syokau tells it all without fear of controversy or reproach. She can be hilariously spot-on, sharing personal jokes. She can be reckless, spilling the beans on men, even those of cloth, that are hitting on her.

She also takes on her critics, who for a while made her a trending topic as they cast aspersion on her “bad omen” lyrical prophesy that 2020 would be a great year.

In the song that broke the internet at the start of the year, she declares a prosperous 2020, a promise her thousands of fans danced to until Covid-19 struck. And they have struck back. They say Syokau was responsible for "provoking the devil" to strike. However, the artiste maintains 2020 is a good year, one in which she has greatly progressed, and urges her followers to hold onto their faith.

“I have heard people saying I should not sing again, and that if I do another pandemic might strike. My song Twendi Twendi has nothing to do with the pandemic, just as God’s plans are not being hindered by the same. I will be releasing another New Year song by December 31.

READ ALSO: My hubby threw me out because of house help- Singer Justina Syokau

“For now, they can enjoy my brand new festivity hit, Christmas, whose video drops this weekend. But I must repeat, I am not to blame for Covid,” says the artist who released another song, Tujikinge na Korona.

In Christmas, the heavy benga tune blurs the line between gospel and secular. She has embraced the signature Kamba disco tune that provokes one to dance till near ecstasy. She likes it that way; fast and furious. And she passionately confesses she does it for God, her 'intimate friend'.

It is this somewhat controversial demeanour that is winning the social happy soul thousands of fans, as her songs hit. Radio and TV hosts want a piece of her and all social media pages are abuzz, with characters hawking to her all mannerism of ideas. Some want her for romance. And why not! She, too, wants a man to end what she recently described as a “dry spell”.

“I am not looking for a poor man. I am looking for a rich man, one who is driving the Range Rovers if not flying a chopper. I am done with living small. If you are interested and have that among the other qualities I am looking for in a man, then you can start writing your application,” she says, sparking a burst of laughter.

On her Instagram page, Syokau flaunts pictures of her with city preacher Lucy Natasha, in the latter's private chopper.

“This is how we should slay…slay for God,” says Syokau.

Born in Machakos in a humble Christian family, Syokau grew up in church where she discovered her singing talent. After high school, she got a job as a house help in Eldoret in 2006, before moving to Kijabe, where she landed a similar job after post-election violence.

“As much as I knew I am a talented singer having written over 77 songs, I didn’t have the financial capacity to record them, and that is why I settled for the house help jobs so I could save some cash for the studio,” she says.

“While at Kijabe, I entered a singing talent competition that I won and through that got an opportunity to record my debut album Mwachie Yesu in 2009,” she adds.

Syokau also has a book to her name, titled Arise and Manifest Your Potential.

“When I was still working as a house help in Kijabe, an opportunity opened up at AIC Kijabe Hospital, where I worked as a hospitality lady before I was promoted to various posts. I got an opportunity to train as a nurse,” says the bubbly star.

READ ALSO: I lived on the streets, hawked my music CDs after hubby deserted me- Justina Syokau

When she turned 21 she fell in love with a friend, a fellow church member that she had known for some time. He proposed to her and gladly, she accepted and they soon walked down the aisle in a big wedding. Love was in the air, as they exchanged the vows. But in a twist of fate, there was no "forever" or "till death do us part".

“I didn’t know what I had gotten myself into. Two months into the marriage we had so many differences that even got me depressed. I had a miscarriage,” she recalls.

Things got from bad to worse, and the couple eventually divorced. About eight years on, she can look back and laugh at her past woes, having transformed into one of the most sought after gospel singers and emcees in Kamba land, an author and a CEO of her own charity organisation devoted to promoting social and economic issues on the girl-child.

“The past is just that. This month, I launched Justina Hope Initiative, a foundation focused on issues that are affecting the girl-child. Rev Lucy Natasha, who I respect a lot and treasure as a woman of faith, was the chief guest during the launch,” says Syokau, who has been criticised for promoting the ‘slay queen’ image in her videos.

She says she has faced too much misery and poverty before and doesn't want to look it ever again.

“When you see me ooze all this energy with the dance moves in my songs and see me looking all hot and pampered, just know that I am trying to drive this testimony that truly, Jesus can change anyone. I lived in the ghetto but never lost faith. Faith can move mountains,” she concludes. 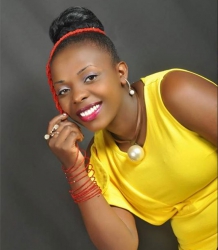 I lived on the streets, hawked my music CDs after hubby deserted me
4 years ago