10 celebrities whose careers were destroyed due to drug abuse 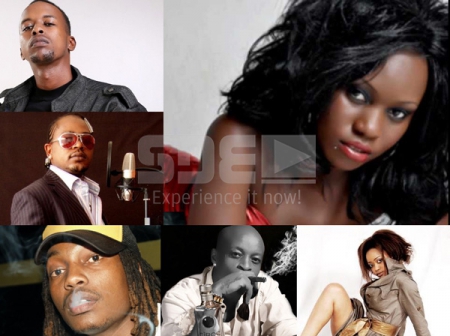 Last weekend, a mega concert that was being held in the city was put on hold temporarily after plainclothes police officers arrested fans who were smoking bhang.

The officers were called in by the organisers after tens of fans started smoking the drug in public to the irritation of many who protested and threatened to leave the venue if the youngsters continued smoking marijuana. Among those arrested were an upcoming singer and a dancer.

This comes as revelations emerge that many celebrities and music fans across East Africa have become drug addicts with many musicians now falling prey to the practice that is ending the otherwise colourful careers of many talented stars.

Early this week, the National Authority for Campaign against Alcohol and Drug Abuse (Nacada) chairman John Mututho reiterated that the sale of drugs was rife in the University of Nairobi, which was closed down last week following two days of unrest by students.

The calls come barely a week after Inspector General of Police Joseph Boinett directed that Mututho records a statement with police over his allegations.

But despite the directive, Mututho noted necessary Government agencies had all the information and wondered why no action had been taken.

"As Nacada, we have done our part and are worried that no action has been taken against the people involved," he said.

According to sources within Nacada, university students have become major targets by drug lords and powerful individuals involved in the trade.

It was only last week when Ugandan top singer Jackie Chandiru's drug abuse issue was highlighted on social media after it became evident that the one-time best female artiste in East Africa was headed into rehab. The Gold-digger artiste has been on gossip blogs for months, with speculation rife that her drug use had become unmanageable.

More details came out that when she was admitted, her body showed traces of narcotics - the details confirming the singer's heavy use of drugs, which is blamed for her dwindling showbiz career.

"I want to die, my life is a mess!" is one of the many titles blogs in Uganda used to show the levels of desperation the singer had sunk into. She is said to have told her family those words.

Once a creative mind brimming with talent, Jackie has in recent years been a main feature of gossip blogs, and for all the wrong reason.

Jackie's story resonates with the impending collapse of Ray C, another sexy Bongo singer who captured the imagination of many in the region with her seductive eyes, curvaceous body and smooth, racy lyrics.

Just last year, Ray C, who was supposed to perform a series of shows in Coast, pulled a no-show, with Mombasa promoter Ring Ring lamenting the cost he had incurred to secure her signature.

"I had paid her the full amount for the shows and she just had to show up," said a disappointment Ring Ring. "I would say I paid more than enough because her expenses, which were never accounted for, kept stacking up."

It emerged that Ray C was not allowed to travel out of Tanzania. This part was never revealed to Ring Ring until a few days to the D-day.

"She is trying to make a musical comeback but I think her past demons have not left her," opined Ring Ring of Ray C, who was at some point helped by former president Jakaya Kikwete.

Ray C drug-problems are also tied to the disappointing career of self-titled King wa Ilala, Chidi Benz. The baritone-voiced bongo rapper, whose confrontational showbiz career has seen him involved in a number of fist-fights, once beat up Ray C after the singer tried to talk him out of his drug problem.

Once a promising rapper who threatened the hold of then best Tanzanian rapper now turned politician Professor Jay, Chidi Benz was arrested at Mwalimu Julius Nyerere Airport in October 2014 and charged with drug trafficking-related crimes. He was found with 14 stacks of heroin and two rolls of bhang that he admitted were his.

Talking to media personality Salama Cee Jay in an interview, he casually elaborated how he viewed substance abuse.

"Yes I occasionally take drugs, but it's almost what every young person out here does. Whether its bhang, miraa, beer or stronger stuff. It is all about wanting to feel good with yourself," he said.

Pictures of an emaciated Chidi emerged almost a week to Jackie Chandiru's saddening photos. Popular artistes' manager Babu Tale offered to take him to a rehabilitation centre, later revealing that when he saw Chidi, he thought the Dar Stand Up rapper was suffering the physical effects of HIV/Aids.

"I was very moved as a parent, as a Tanzanian, and as a veteran in the music industry. Chidi Benz is struggling because of drugs. After seeing the cruelty in people posting his before-and-after photos, I called and told him I wanted to help him, but only if he was really ready to be helped. He said: "I'm ready, help me," said Tale.

Drug and substance abuse among celebrities has always showed the darker side of the fame and money that comes with the status. Chidi Benz, Ray C and Jackie Chandiru join a long list of celebrities including Juma Nature (alcoholic) who are currently abusing drugs or have been addicts. In the case of Chidi Benz and Ray C, their drug use has even led to financial ruin after the collapse of their careers. For some this happens as a result of their erratic and unreliable behaviour, which meant that no event organiser wanted anything to do with them or book them for concerts.

Former Necessary Noize member and music pioneer Bamzigi has confessed to having been an addict.

"We would go to a city five-star hotel where our supplier would hire an exclusive room occasionally at the rooftop with a beautiful view of the city then we would shoot up. They make you feel like they are giving you the world yet it's your life they are crushing. Most suppliers aren't consumers of the stuff themselves. They will watch you go down and wait until you recuperate then sell you some more. It's really easy to get hooked that way," said Bamzigi in a previous interview.

He has since cleaned up after rehabilitation.

Wakamba Wawili's one half Labalaa would sell his household items to fund his drinking problem, which saw the talented MC quit singing for more than a year. Kewowo rapper Kantai too lost his singing career over what turned out to be alcohol dependence.

Genge-turned-gospel artiste Lady B, who used to brew chang'aa for a living, once claimed that she used to do drugs with Ray C at the time the bongo queen was holed up in Kenya. It took the intervention of friends to take Ray C back home where she has since gone to a rehabilitation centre, but her career is yet to hit those dizzying heights it once hovered.

Others who have been involved in drugs include Bobby Mapesa, [email protected] and Harry Kimani.

Kimya Kimya artiste Mangwair died of a drug overdose in a South African hospital in 2013. A few weeks later, former Coca Cola Popstar winner Langa Kileo passed on. The two had been drug addicts; with bongo highly acclaimed producer P Funk Majani explaining that the pressures artistes go through pushes some of them into substance abuse.

Not long ago, Kenya's self-proclaimed king of bling Prezzo showed up plastered on prime time television. According to sources who sort anonymity, not many can keep up with Prezzo's wild lifestyle. It is said he goes hard on all levels.

"If you hang out with Prezzo and try to keep up with his way of life, you will probably not last a week. Only he can," said our source.

According to Jaguar, who sits as a director in the Nacada board, this is far from being only an artistes' issue.

"It is a general issue with the youth, let alone celebrities. The youth, artistes included, are under pressure to perform. When they are on top, they easily lose hope if their career starts crumbling hence the urge to indulge to escape from their troubles," he said. "We have numerous programmes in place to guide the youth in the right direction. I have also been speaking to affected artistes as well and we are giving them proper guidelines. I recently spoke to singer [email protected] and now I can confidently say he is off the scourge," he added.

But even as Nacada struggles with keeping Kenyans clean, there still lies an underlying challenge in the age difference. "Most of the officials are old and may not relate to the real issues driving the youth to abuse. We still need young officials to run it," Jaguar concluded.

Tyre Nichols' brutal beating by police shown on video
News
By AP
4h ago
Marriage on rocks: Many women just want a child, not a man
Lifestyle
By Peter Muiruri
9h ago
Tems becomes first Nigerian to be nominated for an Oscar
News
By Kirsten Kanja
9h ago
Japan launches whale meat vending machines to promote sales
News
By AP
10h ago
Jay Leno breaks bones in motorcycle wreck months after fire
News
By AP
10h ago
.