Joke that was Burundi mutiny: Guide to staging successful coup in Africa

By Peter Wanyonyi | 6 years ago 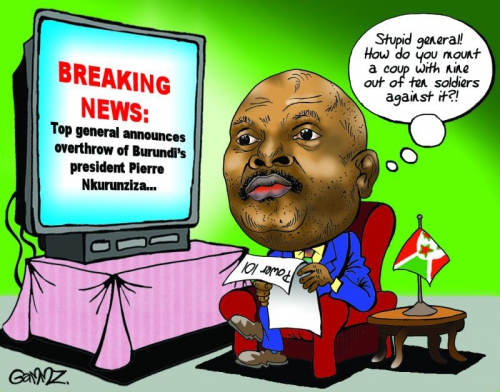 What a clumsy coup! You just don’t stage an incompetent coup! No. You don’t! Reason? Botched coups results in nasty civil wars. It’s been a sad couple of weeks in Burundi.

The people of that politically benighted little country, long scarred by civil wars and, today, the second poorest country in the whole world, thought they had at last embarked on a path to change, reform and freedom, when some renegade army busybodies declared that President Nkurunziza had been toppled.

Jubilant wananchi took to the streets to laud the ‘heroes’ of what turned out to be a stillborn revolution, celebrating what they thought was the ousting of a leader who now bears all the hallmarks of a “president for life” in the making.

They celebrated too soon. Nkurunziza had been out of the country on a trip to neighbouring Tanzania when news of the coup was announced by a sacked army general. But not much seemed right from the beginning, and for Africa’s future coup plotters, here is the definitive guide to mounting a successful coup. Or rather, how not to mount a coup in Africa.

The first thing is to ensure that you have the right tribes behind you. African countries are generally divided into two groups of tribes: first, there are the martial tribes that run around the place killing people and generally cleaning up. In places like Kenya, these tough chaps are generally kept out of the armed forces because they are way too dangerous, and are thus consigned to griping along the sidelines.

Governments ensure that these tribes have all the guns they need, the better to let them kill each other in the relative safety of their upcountry regions. Such tribes must never be let into the government proper, for the scheming they can get up to will know no end.

The problem in Burundi is that there are only two main tribes, so the lines are a little blurred, still, anyone effecting a coup with any hope of success needs to get the martial tribes on his side. And so the coup boys in Burundi needed to do their homework, and get the Tutsi on their side.

The Tutsi are the traditional bosses of the region militarily, and are to be found bossing other tribes around from Uganda to Tanzania to Congo to Rwanda to Burundi. You cannot effect a coup in Central Africa unless the Tutsi are on board: Burundi’s coup planners and leaders were all Hutu. Big mistake!

The second seminal mistake that the coup plotters in Burundi made, which you must never make!, is to leave the incumbent alive. There’s a reason why, in war, one always tries to target the generals of the other side. Generals and other leaders act as a rallying point for their followers, and nothing is as demoralising to a soldier in the field as realising that his leader is already dead: most will simply lay down their arms and walk away.

That’s why it was so important for Nkurunziza to land back in Bujumbura: the mere sight of him smiling and reassuring his followers that all was OK, was enough to kill the attempted coup. And the coup plotters were quite daft: instead of turning off the airport lights in Bujumbura to stop the president from landing, they should have allowed him to land, and then bathed the aeroplane in bullets

When you want to kill a snake irrevocably, you cut off the head. If you do plan a coup, begin by dispatching the heads of state and government, and their literal, actual heads, to the other world.

Finally, even if one is stupid enough to ignore the advice above, the last bit of counsel is one that must be followed: ensure the rest of the armed forces are behind you!

How do you mount a coup when nine of ten soldiers oppose it, and as soon as the announcement is made fighting breaks out as loyalists come hunting for the plotters? Madness!