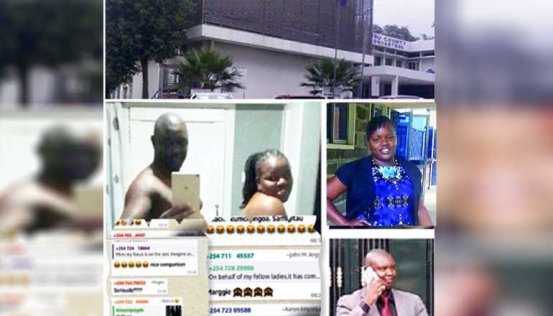 It was giggles galore in Nakuru town last week, when a nude picture of senior married female county officer, Esther Githinji, surfaced on social media platforms. The explicit picture depicted the nude officer apparently twerking uchi wa mnyama with a driver from the governor’s office resting his ‘machine gun’ on the woman’s ample backside. It has emerged that the driver who was also in his birthday suit is one Joseph Mugambi. The two were apparently taking time off for extra-official duties at a lodging and the hapless man accidentally uploaded the image on the ‘Cross-Fire Nakuru Debate’ WhatsApp group. The picture, taken by a standing and naked Mugambi as the two lovers struck an amorous pose in front of a mirror was posted at 9.15am on the forum. Thereafter, it was widely shared by group members to five other WhatsApp groups run by county government staff. Githinji is an IFMIS (Integrated Financial Management Information System) officer with the Nakuru County government. Ironically, in a classic case of siku za mwizi ni arubaini, it is Mugambi, whose wife is said to be a police officer, who posted the picture on the forum where he is among the more than 100 members.

Grab your copy of the Nairobian for more of these saucy details!