A new survey by the International Monetary Fund (IMF) released on Tuesday shows that deposit-taking microfinance entities regulated by the Central Bank of Kenya (CBK), had 1,070,561 deposit accounts, a drop of almost half from 2,036,627 in the previous period.

The number of borrowers who accounted for the biggest revenue-source for these financial institutions also dropped by 15 per cent to 263,992 - from 311,312 in the previous year.

This even as MFBs continued to register losses in what experts have attributed to the onslaught by the mushrooming digital finance platforms such as Safaricom and NCBA’s M-Shwari, a mobile lending and saving platform.

KCB-MPesa is another mobile lending platform giving deposit-taking microfinance institutions a run for their money.

Fintech, said CBK in its 2017 Bank Supervision Report, is the sub-sector’s main challenge. “These challenges include changing business environment, primarily driven by technology,” said the apex bank in the report.

During the period, deposit accounts for commercial banks increased by 6.7 million to 62 million, according to the Financial Access Survey (FAS).

FAS provides supply-side database on access to and use of financial services covering 189 countries. 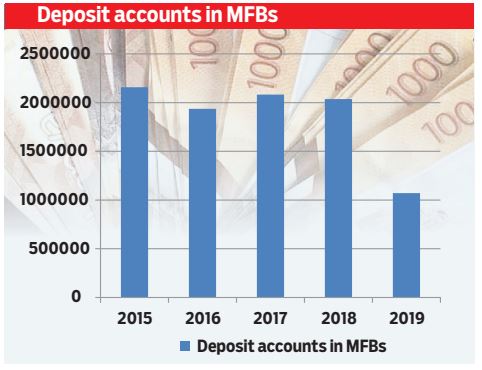 “These trends reflect the recent rise of non-branch retail agent outlets and digital financial services such as mobile money and mobile and internet banking — which continue to play a significant role in advancing financial access especially in low and middle-income countries,” said IMF in a statement.

However, the key highlight of the report for Kenya is the devastation of MFBs with their financial results showing that most of them are stuck in the loss-making zone, as they grapple with huge operating costs against dwindling returns.

CBK was expected to finalise the drafting of the Microfinance (Amendment) Bill, 2018, Regulations by September 20 last year.

Besides, continuous losses that have led to capital erosion and liquidity stress, MFBs also struggle with weak corporate governance structures and practices.

They also have to contend with elevated credit risk, which has led to increased bad loans and inadequate business models. In recent years, numbers for the 13 MFBs have not been impressive, with deposits dissipating and their loan books shrinking.

This was an earth-shattering decline of 450 per cent that stretched the loss-making streak by CBK-regulated micro-lenders to three consecutive financial years.

Another CBK report shows that by the end of 2017, about 70 per cent of MFBs recorded losses - bringing into question the viability of a financial sub-sector that not long ago was hailed as a panacea to financial exclusion in the country.

Loss-making MFBs might be forced to consolidate their operations after CBK proposed a 12-fold increase in their minimum core capital.

In the draft regulations, CBK is pushing for a graduated increase of the micro-lenders’ minimum core capital to Sh250 million in five years, up from the current Sh60 million.

The could kick off a flurry of acquisitions and mergers of the loss-making entities. The regulator hopes the move will help stem the haemorrhage by MFBs, which have been plunging deeper into losses.