Ugali-saucer is not good for you 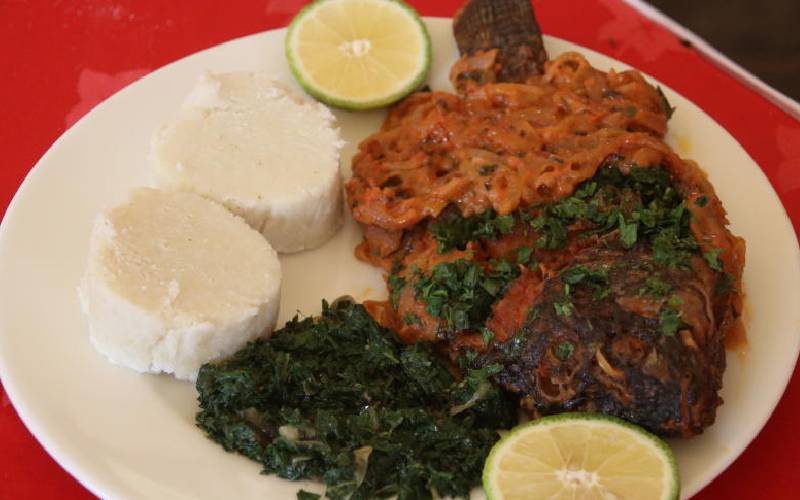 Kenyans have a tendency of eating more food in their houses, in other people’s homes, during ruracio and other ceremonies like weddings, at seminars, workshops and even funerals.

The plate often runneth over, if the food is free and comprising assorted culinary delights at the buffet table.

Most people seem oblivious to the health and medical hazards of stuffing themselves with a kilo of roast goat ribs accompanied by a mountain of ugali and sprinkling of greens. Kenyans also a penchant for demanding ugali-saucer and side soup from waiters in restaurants and food kiosks.

Dieticians and nutritionists, however, warn that overeating does more harm than occasioning obesity, as massive eaters face higher chances of prematurely meeting their maker.

Faith Rotich, a nutritionist at Nairobi Hospital says eating too much results in excess caloric intake, harmful excess body fat and nutrients with negative medical conditions with women at a higher risk than men.

The type of food one eats too much matters. Kenyans, for one, love ugali, chapati and can hardly get enough of chips-all carbohydrates of which, overconsumption “increases blood sugar levels causing your body to produce more insulin which tells your cells to save the extra glucose as fat,” says Fanuel Anam, a food technologist. “This can lead to diabetes, heart diseases and high cholesterol.”

It is uncharacteristic of a Kenyan to have just one chapati as piling chapatis on plates is a common spectacle. Chapatis are made from wheat flour and eating too much elongates the colon making it a fertile ground for secondary infections besides irregular bowel movements, though this varies from person to person.

Overfeeding on chapatis, ugali and chips leads to bloating and with it, duodenal and gastric ulcers, according to Dr Steve Waluande, a molecular biologist and pharmacist who cites scientific reports linking H-Pylori (bacteria in the digestive tract) to high intake of carbohydrates.

Prof Chris Ojiewo, a crop researcher, sternly warns against overconsumption of chips which are “particularly bad if deep-fried as the oil has to be preheated, causing oxidation of fatty acids. Worse still is the re-use of the oil as repeatedly heating cooking oils is detrimental to health, explains Prof Ojiewo. “The bottom line is, reduce consumption of carbohydrates.”

And who between men and women eat too much?

Prof Ojiewo adds that, though boys and girls have similar nutritional needs until the age of nine, at puberty, women’s unique role as child-bearers tend to drive their special nutritional needs, but “with time, men usually grow larger with a higher lean weight and will burn more calories than women who need fewer calories because they tend to be smaller and have higher fat percentages,” explains Prof Ojiewo. “That means women have to be choosier about what they eat.”

And heavy feeding can be genetic beyond tendency of the stomach to enlarge with increased appetite over time.

Prof Ojiewo fingers a gene (CYFIP2) as the culprit associated with overeating and which can run in families and “compulsive binge eating is a neuropsychiatric disorder characterized by episodes of eating large quantities often very quickly and to the point of discomfort.”

Binge eaters often experience loss of control, he says, besides the shame, distress or guilt, but “outside this disorder, overeating develops as a habit over time, with the stomach enlarging slowly and craving for more.”

And just why do most smokers puff at cigarettes seconds after eating?

On his part, Dr Waluande explains that the digestive system works on the whole body and nicotine from cigarettes binds the oxygen in the blood immediately after a meal as “there is an outburst of the free radicals released thus increasing craving for smoking after eating.”

So, how much food is too much food?

Fanuel Anam, a food technologist, concurs and adds that there is no predetermined amount of food that is too much as eating is a complex interplay of physiologic, psychological, social and genetic factors that influence meal timing, quantity and preference.

Anam explains that in physical size, someone weighing 120kg, may not eat equal portions as a 40kg person.

Age is another factor as a child eats less than an adult and “adolescents have a generous appetite but as people grow older, they exhibit reduced appetite from decreased physical activities” while most, the peak calorie need are between19-30-year age-bracket.

Anam also says occupations requiring “physical activities like mjengo, loaders and mkokoteni pushers leads to eating a lot of food” and for a farmhand using an ox-plough, bread and tea for breakfast might invite eternal bile, but for an office couch potato, the same would be fair enough.

Anam says physical work requires high rate of metabolism and thus a lot of food compared to an accountant of similar size, age and height.

The rate of metabolism is also influenced by genetics and consumption of stimulants like cannabis sativa and traditional herbs like mukombero, says Anam adding that height also matters as “taller people eat more food compared shorter ones as they generally have bigger organs, bigger bones and have greater lean mass which is related to metabolic rate, meaning tall people need more calories to function.”

Tall people thus consume more carbohydrates which is the body’s main source of energy and which helps to fuel the brain, kidneys, heart muscles and the central nervous system. They also have high intake of foods rich in fibre, a carbohydrate that eases digestion, makes one feel full while keeping blood cholesterol levels in check.

Dr Wanjala cites signs of overeating as including taking breaks in order to finish a meal, or loosening pants to cope with bloating, besides that discomfort that sees eaters sitting at 45-degree angles.

Another sign, he says, is experiencing a hot flash mid-bite even when the food is not spicy but people “can measure how much is too much by combining food journaling with portion control” as “eating too much causes your body to work on overdrive.”

“Once you are overweight as a result of too much eating, you will develop or have a higher risk of cancer, diabetes, heart disease that can lead to your premature death,” says Dr Rupen Haria, a dealer in medical and pharmaceutical products.

The UK trained pharmacist adds that though overeating is associated with junk food, people also overeat on healthy foods.

The maxim, he says, should be eating when one is hungry as opposed to at the plain sight of food. Controlling the quantity and quality one eats per day is also important as the overweight have higher cholesterol and high blood pressure which are precursors to obesity, hypertension, diabetes, chronic heart diseases and death.

But there are foods people can consume in large quantities with minimal side effects including fat-free foods, nuts and legumes, fruits and vegetables which are a good source of vitamins and minerals, including folate, vitamin C and potassium. They are also excellent sources of dietary fibre, which helps in maintaining a healthy gut besides preventing constipation and other digestive issues including reducing risk of colon cancer.

Diseases have claimed the lives of many people in the area because patients seek treatment when it is too late.