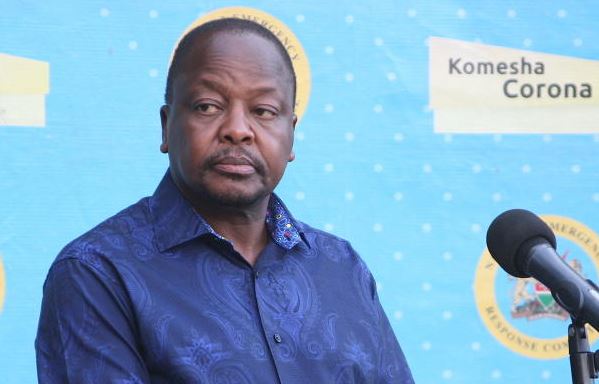 Eighteen patients have died of the coronavirus, in the latest statistics released by the Ministry of Health.

Health CS Mutahi Kagwe (pictured) says that one death was reported in the last 24 hours, while the other seventeen are late deaths reported after conducting facility record audits on diverse dates in the months of May and June.

The positivity rate also stands at 10.1 per cent after 646 people tested positive for the disease.

The CS said this stems from a 6,429 sample size conducted in the last 24 hours.

Some 391 patients have recovered from the disease, “211 from the Home-Based and Isolation Care program while one hundred and eighty have been discharged from various health facilities.

Kagwe added: “1,017 patients are currently admitted in various health facilities countrywide, and 6,653 patients are under the Home-Based Isolation and Care program. 102 patients are admitted in the ICU, thirty-three of whom are on ventilatory support and fifty-two on supplemental oxygen.”

The Ministry says it is observing some seventeen patients.