Help on the way against cancer-causing pesticides 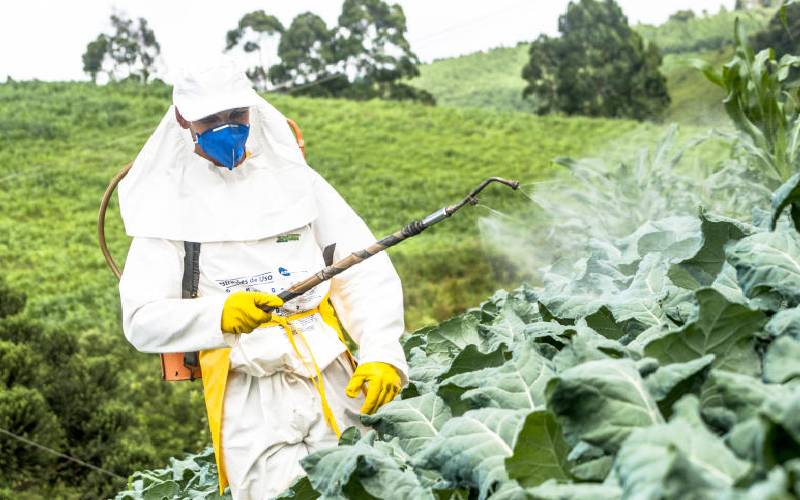 Help may be on the way against scores of pesticides linked to cancer, infertility, birth defects, and other debilitating health injuries.

“We are coming for you,” says the Pests Control Products Board (PCPB) in a letter to distributors of pesticides linked to cancers.

The board says it is reviewing evidence linking pesticides containing the chemicals diuron and chlorothalonil to cancer with the aim of banning or restricting their use.

“We are also excited that Germany will be exiting the use of the notorious cancer-causing glyphosate in about four years,” said Ann Wanjiku Maina of Biodiversity and Biosafety Association of Kenya (BIBA-K)

Last week the German Government approved legislation to exit the use of glyphosate in 2024 because of environmental-related concerns.

With more than 70 products registered in Kenya containing glyphosate, it is the most used weed killer in the country. Kenya imports about 2.6 million kilogrammes of glyphosate-based products annually.

A new study by Albert Nyongesa of the University of Nairobi and colleagues from the Evangelical University in Africa of DR Congo has linked the weed killer to possible male infertility.

“We found the chemical to interfere with the development of the male reproductive organs,” said the researchers.

The team said their animal studies had shown exposure to the weed killer has serious negative effects on the male reproductive organs, the liver and kidneys.

The scientists had exposed 40 guinea pigs to the weed killer for two months and observed its impact on internal body organs.

Male guinea pigs exposed to the weed killer were found to have low weight gains and abnormal but dramatic small-sized and low weighing testicles.

The team also reports the rats fed on glyphosate had sperms of low quality, poor movement ability, and of low viability compared to rats not fed on the chemical.

The exposed animals also developed enlarged and heavier livers and kidneys, a suggestion of organ poisoning. “The weights of the liver and kidney increased significantly in exposed animals.”

These results the team says point toward the toxic effects of glyphosate on vital organs and reproductive function of the body at high doses and long-term exposure.

The study was published earlier this month (February 8) in the journal Veterinary Medicine and Science.

“The use of glyphosate, even at low doses, must be limited due to its hazardous effect on animals and human since the two have quite similar physiology,” reads the new study.

How you get exposed

People may be exposed to the weed killer during handling, while spraying or coming into contact with sprayed plants or consuming contaminated food or water.

“Kenyans are facing real health risks from the proliferation of harmful pesticide in the country, including glyphosate-based products,” says Ibrahim Macharia, a senior lecturer at Kenyatta University.

In a recent media interview, Dr Macharia said of about 1,345 registered products in the country, 11 were classified by the World Health Organisation (WHO) as highly hazardous and 237 moderately hazardous.

“Many of the more harmful pesticides have active ingredients, such as glyphosate, that are banned or heavily restricted in other places, such as Europe.”

In one of his studies in 2015, Macharia found the use o pesticides in Kenya to have doubled within a three-year period and so had pesticide-related health complaints.

Kenya’s Plant Health Inspectorate Service indicates that almost half of the fresh vegetables sold in Kenya have high levels of harmful pesticides residues.

Use of pesticide has also been linked to increasing male infertility in high agricultural areas of Kenya and a rise in the number of boys being born with defective reproductive organs.

“We have petitioned Parliament for an immediate ban on the Kenyan market of all pesticides that are classified as carcinogenic, mutagenic, endocrine disrupters or have neurotoxic effects,” says Wanjiku.

The petitioners say there are 24 pesticides classified as cancer-causing in the local market and a similar number that can interfere with human genes and 35 known to disrupt hormones while another 140 are known to affect the nervous system.

“These products are either banned or limited in Europe, UK and the US and we wonder why they should be in use here,” Wanjiku told the Standard.

BIBA-K and several other NGOs, farmers and scientists had in 2019 petitioned Parliament to order the withdrawal of harmful pesticides from the Kenya market.

Acting on the petition, the Parliamentary Committee on Health in October 2020 made several ground-breaking recommendations that could see the removal or restriction of the killer chemicals.

The committee for example recommended that the pest control board, Kenya Bureau of Standards, and the ministries of health and agriculture analyze and list all harmful pesticides in the local market with a view of banning them. The committee directed this to be done within three to six months from October.

The committee also recommended that the agencies map out areas with the highest use of harmful pesticides and initiate appropriate public protective measures.

The petitioners had specifically demanded the limiting of products containing several harmful chemicals including diuron – a herbicide and chloronthalonil – a fungicide – due to their wide use.

Studies have shown chloronthalonil to interfere with the development of ovaries and the quality of sperms in mice while it is also listed as cancer-causing.

The pest control board has since written to pesticide distributors notifying them of its intention to ban or limit these harmful products.

“Please note that failure to conclusively respond within 90 days will be construed to mean that you concur with the decision that may be taken by the board,” says the letters.

Though this looks very good on paper, the lobbyists say it may not work because the government agencies lack the capacity to independently verify company-provided safety reports.

During presentations to the Parliamentary committee it emerged that the pest board lacks the human capacity and infrastructure to undertake such a verification exercise.

The construction of a modern residue laboratory initiated at the board in 2018 the committee was told has since stalled due to a lack of funds.

“We also feel the three to six months compliance period is too short to comprehensively do a good job,” say the lobbyists demanding more time and resources be allocated to the exercise.

On the increasing use of pesticides, the board partially blamed the boda boda sector and recent government policy to transition all children from primary to secondary schools.

The two activities the agency said have resulted in increased use of herbicides since hand weeding was no longer tenable as more children go to school and young men enter boda boda sector.

“The Parliamentary recommendations can save lives and reduce illnesses if they are stringently implemented. It is a step forward,” says Wanjiku.

Previous article
You can leave WhatsApp group chats without notifying anyone
Next article
When losing an election becomes a disease
.

By Saada Hassan Aug. 8, 2022
During political transitions, children with disabilities are often forgotten
.