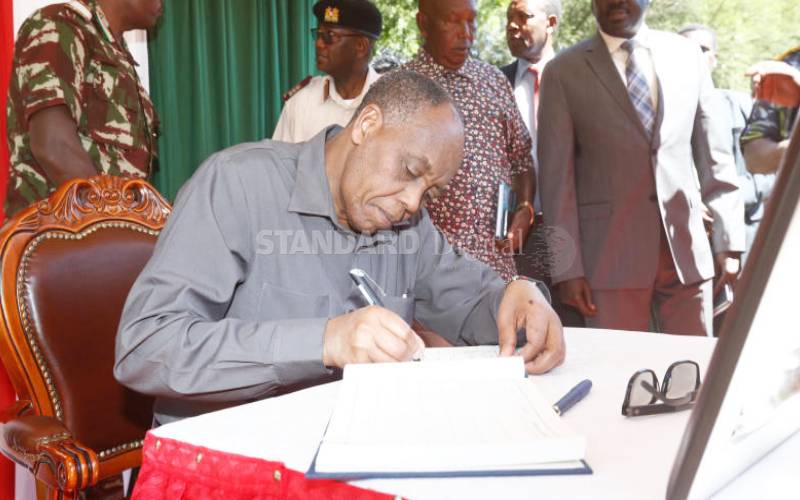 Being appointed the chair of a State corporation comes with the trappings of power.

Many of them political appointees, the chairpersons and board directors have always had substantial resources at their disposal.

This good life is, however, coming to an end as the Government moves to strip parastatal board members of the largesse.

The Government has been on a severe austerity programme for months and hos now turned its focus on the expenditure at State agencies, many of them struggling while the directors live large at their expense.

Board members will now have to ditch their fuel guzzlers when on State corporations’ business or pay for the fuel. They will have to settle for cars with lower engine capacities, which has now been capped at 1800cc.

Meetings will take place in facilities at the parastatal offices, away from the swanky hotels they are used to. The number of meetings taking place out of town will also be limited.

The memo to the Cabinet Secretaries, Principal Secretaries and chief executives and chairpersons of parastatal boards also capped the meetings that any board can have in a year at six.

“The board meetings shall be restricted to a minimum of four as provided by the State Corporations Act and capped at a maximum six for each financial year,” said Mr Kinyua.

Board meetings are a lucrative source of income due to sitting allowances.

The new measures will also give room for management to work away from overbearing boards, with some boards meeting so often that they are a near permanent feature at the offices.

“Approval for any extra board meetings (including special board meetings) above the maximum number specified shall require a justification by the board as to the source of funds, and implications thereof, and reasons why the same cannot be adjudicated in regular meetings,” said Kinyua.

The request will need to be submitted for approval by the relevant Cabinet secretary in consultation with the State Corporations Advisory Council.

Information available from the annual reports of some of the State corporations shows the move will hit many firms whose boards have formed a habit of meeting frequently.

The annual reports filed with the Auditor General’s Office show that the corporations hold dozens of meetings every year. Only a handful were able to keep their board meetings at below 10.

The Commission for University Education was among those that reported the highest number of board meetings at 45 in the year to June 2017, which is the latest annual report that they have filed.

Others that reported a high number of board meetings include Kenya Maritime Authority (22), Kenya National Highways Authority (24) and Kenya Railways Corporation (20).

Kinyua’s directive also requires the firms to make use of the boardrooms that every state corporation has at its premises. This is expected to save money used in booking expensive hotel rooms as well as out-of-town excursions that have in many instances added little value for the organisations.

The trips in many cases result to the Government footing hefty bills for hangers-on that accompany the directors.

“All board business including committee meetings shall be transacted at the principal office of the corporation, not branch offices. Board retreats are to be approved by the respective Cabinet secretary,” said the memo issued on March 11.

The committees, which are tasked with oversight of different aspects of a company such as human resource, finance and audit, are also a lucrative source of funds for the directors.

Other than the full board meetings, the committees have meetings that earn the directors allowances.

“A board may establish not more than four committees including the audit committee, to deal with the conventional issues pertaining to the running of the State corporation… members to any committee should be no more than a third of the full board,” said Kinyua, adding that a board member can only sit in two committees

While parastatals will continue to foot transport bills, the directors will be required to either use vehicles provided by the corporation or the most economical means when on company business.

By Dominic Omondi 1 day ago
Premium Charles Muchene: The highs and lows of chairing EABL board