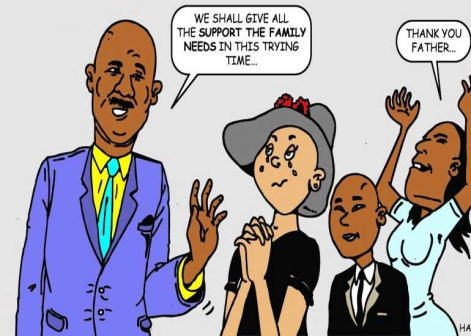 I know I am not the only one who has experienced some of these people who show up during a burials and promise the bereaved family heaven only to deliver the hottest part of hell. These are the same people who insist on being offered an opportunity to say something about the bereaved on the burial day even if the programme is tighter than a guitar string.

In most cases, they either are village elders, head teachers or principals to the orphans and even directors in organisations the deceased worked at the time of their death.

We are used to relatives thumping their chests during the burials and giving promises then fail to fulfill them. That, I can try to understand because probably they took the burial as an opportunity to show their might within the family or better still to settle family scores. That is an issue elders within the community can handle by either summoning whoever made the promise and giving them a piece of their mind. We both know nobody wants to cross the elders' path, especially when it has to do with a sensitive matter.

What I fail to understand is why a total stranger would want their name printed on the funeral programme as one of those going to give a speech only for them to take the chance to lie to the congregation. It is not the first, second or even third time I have come across a case of the deceased's boss assuring mourners that his organisation would take care of the education of the children left behind.

Promises of such magnitude, if not fulfilled, are enough to send the remaining spouse or even the children into a second phase of mourning.

My friend's husband passed on last year. During the funeral, the employer said that his organisation would allow this widow to continue living in the staff house. He promised to let her stay there until she was ready to move out since she was a housewife and would need some time to settle.

You should have seen how mourners clapped and cheered this director. The drunk mourners broke into song and those who were high on cheap drugs blew vuvuzelas as though their team had just secured a place in finals of FIFA World Cup.

The widow rose from her seat, walked straight to her late husband's boss and gave him a long hug. She must have felt relieved.

Two months after the husband's burial, my friend, without any prior consultation was ruthlessly kicked out of the staff quarters. I say ruthlessly because she was not even given a notice. She was just told to vacate the house. This director did not even wait for the flowers on his late employee's grave to wither!

As if that was not enough, the very head teacher who had as well made it clear before the mourners that the school was going to pay for the deceased's daughter's high school education refused to answer the widow's phone calls.

Here was the widow with a daughter who was out of school and they were equally on the verge of becoming homeless yet no relative would listen to their plight.

After all, it was said in broad daylight that the child's education and their housing was going to be taken care of. It was such an uphill task trying to convince these same relatives that none of those who promises had been fulfilled. As if to show the widow how serious he was, the head teacher sent the girl home because of school fees arrears.

You cannot summon strangers and force them to fulfill their promises, neither can you report them anywhere.

If faced with such a situation, the affected family is forced to go back to the drawing board, something that could have been done earlier were it not for these 'Good Samaritans' thirst for fame at a funeral. You even end up regretting why you ushered them to the high table during the burial; they should have just braved the scorching sun like everyone else lining up for food!