International Bikini Day: 10 of the most ridiculous ones celebs love to wear

Trendsetters By The Mirror 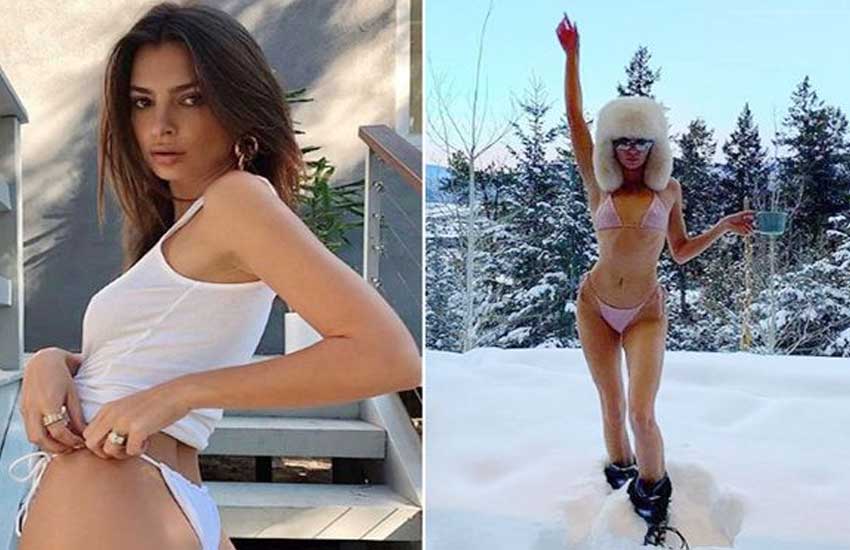 ALSO READ: #FashionTips: How to dress in a chiffon top

July 5 2019 marks the 72nd birthday of the bikini, which was invented in 1946 by a Parisian fashion designer named Louis Reard.

From it's initial creation until today, we've certainly seen some new takes on the classic two-piece.

With summer upon us, you might have already found the perfect swimming costume to wear to the beach, but if you're still on the hunt for something, you might want to look to the stars for some inspiration.

No, I'm not talking about space, but instead the glamorous celebrities who have taken over our Instragram feeds, posting one sexy swimsuit selfie after another.

Though, if you're planning on copying the styles of the rich and famous you might want to psych yourself up a little first, as their choices are rather daring.

Here's a look at some of the weird and wonderful bikinis that have surfaced over the last few months - may they help you make your own smart decisions when swimsuit shopping.

ALSO READ: #FashionTips: Why you need that pair of stockings

The daring piece of swimwear turns traditional bikinis upside down, by exposing cleavage under the top, as opposed to above.

Online fashion retailer Oh Polly are selling their take on the look and it features a cropped t-shirt bikini top with a cut-out underbust detail.

To go with this, are a matching pair of high waited thong bottoms, which also feature cut out sections and tie around the waist.

The look certainly isn't for the faint-hearted as it leaves very little to the imagination.

Oh Polly call their item the 'Spill the tea underbust t-shirt bikini' and the product description reads: "Wanna cover up, but don't really wanna cover up?

"Our cropped t-shirt bikini is gonna give major swim envy at any pool party."

A number of people have been snapped sporting the trend, including influencer Sarah Ashcroft, who wore the Oh Polly look during a trip to Koh Samui in Thailand.

Samantha Rayner, who has over 460,000 followers is a fan of the bikini too, posing in several different variations of the style on her social media.

Geordie Shore star Charlotte Crosby has also jumped on the trend and has been photographed wearing something similar.

Online fashion retailer Cult Gaia and designer Adriana Degreas have teamed up to create a rather unusual item of swim wear.

Together they've produced The Shalese bikini, which features a very cheeky top that leaves little to the imagination.

The garment is made from tulle and acrylic so is mostly see-through, but does have a bar across the middle to cover up the nipples and stop women from showing it all.

A number of Instagram users have been snapped wearing the racy swimming costume, but it's certainly not for the meek and mild as it's bound to turn heads by the pool or at the beach.

This isn't the first cheeky bikini Degreas has made, with her other designs known to feature giant lips on the bikini bottoms and hand prints on the tops.

Fans of this particular swimsuit will have to save up a pretty penny if they want to buy it as it doesn't come cheap, with the set costing $590 (about Sh60.5k).

"Our first Swim Collaboration with Brazilian designer Adriana Degreas. This collaboration is a mix of both brands, West Coast Lifestyle and chic Brazilian flair. An ode to tropical surrealism."

Fitness blogger Camila Guper was recently pictured wearing The Shalese on Instagram while on holiday in Mykonos.

The material makes the whole thing rather see-through and the high rise bottoms add to the daring style.

People loved the snap and were big fans of the daring bikini.

Another added: "Need this in my life" with three flame emojis.

One woman wrote: I'm in love with neon at the moment."

Some weren't completely sure about the design, with one writing: "Little trashy but cute."

Just when we thought we'd seen it all, another wonderfully weird swimming costume comes out of the wood work and takes us by surprise.

And by that we of course mean there's a new beach must-have doing the rounds on Twitter and Instagram.

People can't stop talking about something called a Towelkini, which yes, is just as bizarre as it sounds.

The rather unusual garment combines a towel with a bikini (kind of) and will set you back a whopping £150 (Sh19K) if you choose to buy one.

Designed by New York artist, Aria McManus back in 2014, the Towelkini went on sale at Special Special  in 2018, but it's only just been discovered here in the UK.

It hit the headlines this week following an appearance on Loose Women.

The ladies of the TV panel couldn't stop giggling over their own version of bizarre garment on Tuesday morning, when Coleen Nolan modelled it for all to see.

It's currently available to buy online in two colours - orange and white, or pink and white.

Most of us try to avoid getting a wedgie wherever possible but celebs appear to be loving a bikini trend where they deliberately wear cossies that give them a wedgie.

Famous faces such as Demi Rose, Chloe Ferry, Gabby Allen and Emily Ratajkowski have shared several snaps of themselves in the rather uncomfortable looking pose.

Fabulous magazine has called the look the 'Wedgie Rise' and its believed to be popular due to the fact that it helps avoid getting unwanted tan lines on your bum.

Celebs aren't just loving having their wedge rise bikinis they're also enjoying wearing designs where the waistband sits high up, creating a noticeable V shape at the front.

The high-legged look will be familiar to many as it similar to swimsuits made famous by the Baywatch cast in the 80s and 90s.

But now the trend is back with the likes of the girls from Little Mix, the Kardashians and various Love Island stars rocking the look.

And it turns out there's a very good reason to give it a go.

According to one leading stylist the look gives the wearer a more streamlined silhouette.

They told The Daily Star: "Whether it's a string style or brief cut, it elongates the leg and streamlines the waist giving the illusion of a more svelte, hourglass silhouette."

They added that it was a good way of distracting eyes from other assets as well.

"The pose takes the attention away from your cleavage, instead drawing the eye to the curves of your hips and waist."

Despite the plus side of the look, many people still can't deal with how uncomfortable it must be.

Recently one parenting blogger decided to try it out for herself - with hilarious results.

Mum Laura Belvin, who posts under the name Knee Deep In Life, recreated an advert she saw on Beginning Boutique's Instagram for a pair of revealing high-waisted bikini bottoms.

Shoppers in the comments had branded the garment a "va**** flosser".

Instead of splashing the cash on the item, the mum of two made her own version and ended up having to place shocked face emojis over her private parts as they were exposed by the look.

It's fair to say she didn't recommend others tried it at home.

@maduhlyn_ in the Las Olas bottoms

If you're looking for something a little eye-catching, this could be the trend for you.

A number of celebrities have been flaunting their figures wearing incredibly tiny bikinis - where the bottoms are held together by drawstrings.

Yes, drawstrings, like the ones you used to use on backpacks when you were a child.

The skimpy swimwear doesn't contain much fabric, so you'll have to be pretty brave to pop a pair of these on come warmer temperatures.

But there's one big bonus to the surprising design - anyone can wear them.

Swimwear designer Rozane Uzureau told news.com.au: "Anyone can pull of a high-waist or high-cut look because it will compliment any figure.

"This design has an optical illusion that draws the eye line to the waist and because your waist will always be smaller [than the hips] it gives the optical illusion of looking slimmer overall."

Model Emily Ratajkowski is a fan of this style, having included some drawsting bottoms in her swimwear range Inamorata.

Her set comes in a number of colours and patterns, but will set you back around $70 (Sh7.1K).

If the drawstring bikini wasn't quite bold enough for you, then there's always another item in Emily Ratajkowski's swim wear collection that could catch your eye.

The set in question is called the Las Olas and it features a barely-there top with number of criss-crossing straps that tie like a bow around the torso, and another pair of very, very tiny drawstring bikini bottoms.

Emily shared a snap of herself wearing the bikini on the brand's Instagram page during a trip to Sydney's Camp Cove Beach - before suffering a rather embarrassing nip slip.

Her photo sparked a heated debate as many were baffled by the look and branded it "ridiculous".

One woman commented : "These bikinis are awful, like u have an amazing bod but honestly I'm afraid everything will fly out with the slightest movement."

Another said: "That looks so ridiculous. Horrible."

A third posted: "I think it's vulgar and classless."

However not everyone hated the look.

Another replied: "Stunning bikini" and added a heart emoji.

This style features  a cute bandeau top which is drawn in to resemble a bow.

The look isn't new and has been around for years, but it seems it's going to be the 'must wear' look this summer.

PrettyLittleThing's pink take on the design is already proving very popular and snaps have been widely shared on social media.

As well as looking great, the sexy bikini top has another huge advantage - barely any tan lines. Winning.

The online description reads: "Show off that sunkissed skin in this cute bikini top. It features a fuschia textured fabric in a bow design, style it with the matching bikini bottoms and a beach skirt for the ultimate vacay look."

Influencer Abby Dowse posted a photo of her wearing the pink design on social media, and fans loved it.

In the post, which was shared by PrettyLittleThing, she wrote: "Working on my underboob tan on this fine Monday."

This one isn't so much to do with bikini design, but it's still pretty ridiculous nonetheless.

Celebrities have been going to extreme lengths to stand out on social media, with several heading out in sub zero temperatures and snow, stripping down to their swim wear and posing for pics.

Most recently it was Victoria's Secret model Kendall Jenner who took on the trend, staging an impromptu bikini shoot on a winter ski trip.

The 23-year-old showed off plenty of skin as she stepped out in ski boots, googles, a fur hat and a very tiny pink bikini.

Her sister Kourtney Kardashian also gave the trend a try, posing in a bikini and silver puffer jacket in similar temperatures.

#FashionTips: How to dress in a chiffon top

#FashionTips: Why you need that pair of stockings

Fashion and Beauty by Esther Muchene

#FashionTips: How to style your ankle boots