By
Derrick Oluoch and Audrey Masitsa16th May 2019 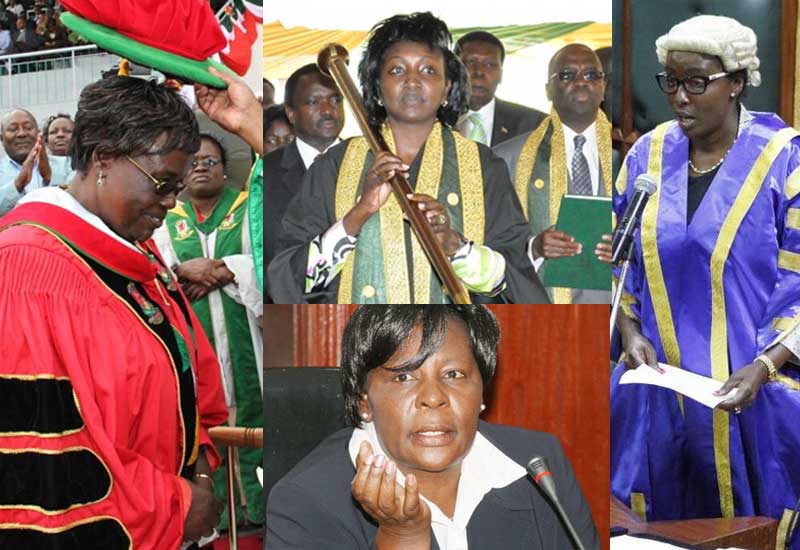 The law is clear on termination of employment contracts, however, we have been treated to instances where employees have been removed from office amid claims of malice. By their own admission, these women have had to cope with life outside their jobs after dismissals that they termed unfair.

In 2012, a tribunal formed to try former Deputy Chief Justice Nancy Baraza after allegations that she assaulted a security guard recommended her sacking. Baraza later withdrew a plan to appeal the tribunal’s ruling and opted to resign saying she expected no justice from the Supreme Court.

Describing the incident as “a security lapse’ on her side, Baraza however insisted her colleagues used the incident to target her with malice for being an “outsider.”  She argued that if the same high standards applied against her were used against all State officers, many would be in jail.

While recounting her dramatic ouster in 2012, Baraza, who served as the first Deputy Chief Justice under the 2010 constitution, claimed it was maliciously orchestrated by her colleagues. She singled out a Court of Appeal judge, who she claimed planted stories in the media to see her out of the Deputy Chief Justice (DCJ) job.

“It became a media feast (for) my own colleagues from the Judiciary, and these are not lies because whoever they were calling I was able to get the information. For example, a judge from the Court of Appeal would call somebody from the media and tell them to “keep the story rolling until she gets out,” she said.

She said the motive was to taint her reputation and force her to resign even if a tribunal did not find her guilty.

“People were calling the media, people were paying people to throw things to the media. The reasoning was that even if she survives the tribunal, she should have no face to come back to the Supreme Court,” she said.

Also from the corridors of justice, former Judiciary Chief Registrar Gladys Boss Shollei was sacked by her employer, the Judicial Service Commission (JSC), over allegations of misappropriation of funds and abuseof office.

In a detailed statement, the then President of the JSC and Chief Justice, Willy Mutunga, said Mrs Shollei was sent parking for her incompetence, misbehavior, violation of the code of conduct for judicial officers, insubordination and violation of Chapter Six and Article 232 of the Constitution.

According to reports, Mrs Shollei first found herself on the receiving end for receiving Sh2.56 million in sitting allowances during JSC’s interviews for Court of Appeal and High Court judges despite not taking part in the process.

In a rejoinder, Mrs Shollei refuted the numerous allegations tabled against her by the JSC saying she was fired in bad faith. She went to court to challenge the decision saying she was never given an opportunity to call witnesses to defend herself. She alleged that her dismissal began with a compulsory leave that was announced through the media. All in all, she maintains that she responded to all the allegations made against her and even requested for a public hearing that was never granted.

Just two years after her appointment as Vice Chancellor of Egerton University, Professor Rose Mwonya was accused of gross misconduct and suspended for 90 days by the university’s council.

In a letter dated September 2018, it was claimed that she had been involved in financial mismanagement that caused the university to lose millions of shillings. She is said to have approved the construction of a gate whose cost was Sh. 70 million and allotting Sh. 180 million to a farm owned by the university.

It was also alleged that she had awarded scholarships to ineligible students. Professor Mwonya was also accused of recalling another professor who the council had suspended with regard to the above scholarships.

A month after the suspension, the Nakuru Labour Court temporarily reinstated the Vice Chancellor and ordered that she resume her previous duties.  She had filed a suit against the University Council contesting the allegations and the case is in court.

Dr Elachi is a woman of many firsts. She is the first female Speaker of the Nairobi City County Assembly, a position she still holds to date. She is also a member and chair of several committees of the city County Assembly. Before that, she was the Senate Majority Chief Whip in the Kenyan Parliament.

In September 2018, she was impeached as the speaker of the city county assembly. Her tribulations started after MCAs accused her of misusing taxpayers’ money, abusing powers of her office and tribalism among others.

A Labour court dismissed the move by the county assembly to impeach her and reinstated her pending a hearing in court. According to the ruling, Dr Elachi wasn’t given sufficient time to defend herself since her summons were served to her at 1.30pm requiring her to be before the assembly at 3.10pm on the same day.

The court also forbade the assembly from attempting to remove her from office again.