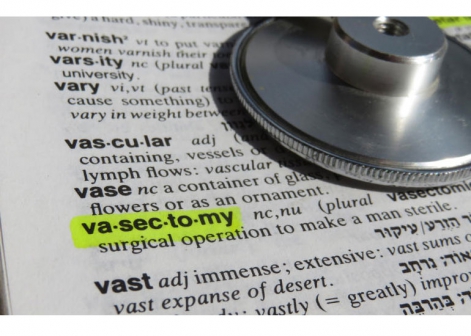 ALSO READ: Family planning options for the man who wants to take charge

To snip or not to snip? We are not talking about circumcision. We are talking about vasectomy, a procedure which many Kenyan communities consider taboo.

While family planning methods have been championed in Kenya and men have been educated on their importance, most of them will still not take the vasectomy route.

From a survival of the fittest point of view, African cultures were skewed towards multiplying as fast as possible to ensure continuity and strength of a community.

The most horrifying aspect for men is that reversing a vasectomy is complicated, if not outright difficult.

Over the years, scientists have come up with a solution -- sperm storage.

A man can opt to have his sperm frozen before he undergoing a vasectomy and can then father a child years later, by means of artificial insemination. This notion however, is not too popular with Kenyan men.

“I don’t see the point. If I am to be a father, I want to be a father when I am young,” says George, 33. “I want to look into the eyes of my woman when we are making our child.”

Leni, 28, concurs. “When a man is making a baby, he should be the one who fires the gun. Not some doctor in a white jacket in some laboratory in god-knows-where.”

To these men, procreation is meant to be a real time act between a man and a woman. The prospect of freezing sperm to use it later doesn’t sit well with them.

George, however, agrees that he would consider having a vasectomy if his woman asked him to.

“Sometimes these birth control things don’t work very well or a woman reacts badly to them. In a situation like that, if we already have children, I would definitely get a vasectomy,” he says.

And as more women become independent and get to choose what to do with their bodies, the pressure is building on men to also take responsibility for family planning.

Options like artificial insemination are no longer a taboo since more women require this service. Also, women want to have children later so more men are being inspired to comply.

There aren’t many men who think like George though, especially when it comes to vasectomy.

Catherine Kyalo of Alpha Medical Services says there is amyth that a vasectomy reduces a man’s value. “Some of them think it will affect them sexually. But that is not true since the penile shaft still works and the only difference is that he cannot have children,” she says.

Catherine has seen many men walk in to consult about having the procedure done. More often than not they are accompanied by their partners.

“For the most part, it is couples who have enough children and the woman wants to get off contraceptives. There was a specific case of a woman who had five miscarriages. For some reason the contraceptives they were using kept failing. Eventually, the man decided to come in and  have a vasectomy.

Many of their patients, she says, are aged between 35 and 50. “There is a lot of fear and apprehension and it’s not just the men. At times, it’s the woman who refuses to go through with it.”

Women, she says, are just as afraid of the perceived consequences of a vasectomy. “They fear having to deal with a man who doesn’t feel like a man anymore.”

Matthew, 44, overcame this fear when he decided to have a vasectomy this year. “My partner and I talked about it after our third baby. I think she’s done her part. It wouldn’t be fair to impose birth control methods on her. So I said I’d be the one to get the cut.”

Matthew is calm as he recounts his story. “Once I made the decision it was simple. The process was painless. One week later I was good as new and you can ask my wife.”

But he admits he wouldn’t discuss this with his parents. “In my community, they just wouldn’t understand.”

Matthew is cheeky when he asserts, “Luckily for me, it’s not exactly a topic you bring up at the dinner table. No one will ask and I won’t volunteer the information.”

But even open-minded Matthew would never have consider freezing his sperm. “Unless it’s a medical situation, I don’t see the need. Have children the way God meant to us to have children. Stop, when you are done.”

It is interesting to note that women have been having tubal ligation for generations without much fuss. For men, vasectomy seems an extremely difficult concept to accept, either due to culture or genetic encoding, but from our interviews and research, it is basically due to lack of knowledge about vasectomy and the consequences.

­­—You can reach the writer on [email protected]

Family planning options for the man who wants to take charge