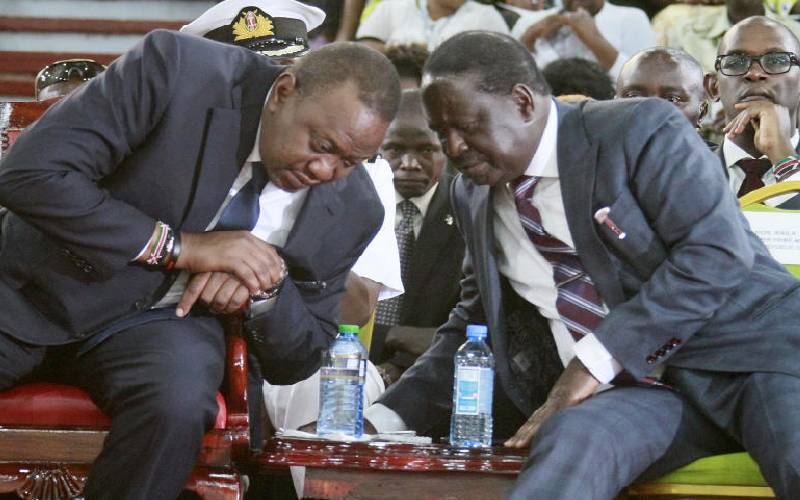 The flow of the Building Bridges Initiative tide drifted towards Parliament yesterday after the Yussuf Haji-led committee announced the completion of its assignment to President Uhuru Kenyatta and former Prime Minister Raila Odinga.

With President Kenyatta and Odinga said to have briefly touched base on the next steps for their legacy project, the focus now shifts to 15 legislators who have the enormous task of determining how the Handshake dream will be realised.

Odinga is away in Dubai convalescing after a surgery.

“The Steering Committee is now prepared to submit its comprehensive advice to the government in line with the indicated times and venues, subject to the ongoing unexpected regulations on the prevention of Covid-19 infection,” a statement from the BBI Joint Secretaries Paul Mwangi and Amb Martin Mwangi said.

And as they prepared to exit from the scene, legislators drawn from both National Assembly and Senate were rolling up their sleeves in anticipation of the big task ahead.

Also in the power matrix will be Eldas MP Adan Keynan whose office as Jubilee joint secretary is expected to play a crucial role in coordinating and whipping members to back the BBI agenda.

Also roped in are the speakers of the two Houses, Justin Muturi (National Assembly) and Ken Lusaka (Senate), and their respective deputies – Moses Cheboi and Prof Margaret Kamar.

Their leadership will be key in ensuring the passage of various pieces of legislation crucial to the reform agenda.

The president and the former PM are seeking to push through changes that will alter the structure of the Executive, with MPs expected to play a crucial role.

Although Parliament is an independent institution, the Executive’s shadow has always loomed large, with MPs expected to toe the narrow path of loyalty to the party leaders.

To forestall any headwinds in its push, Jubilee last month kicked out allies of Deputy President William Ruto from National Assembly and Senate leadership.

Yesterday, Mbadi said the changes in the House were necessary for the reforms being pushed by Uhuru and Raila. “We are entering the final half of the term of this Parliament. There is talk about reform and I’m certain that BBI is going to recommend a lot of statutes and fresh legislation,” he said.

“We are entering a phase similar to 2010, but unlike 2010, we are going to get recommendations from BBI. That is why the changes in parliamentary leadership and House committees were necessary.”

According to Mbadi, what is about to happen through Parliament will benefit the country. He says Parliament will not be a rubber stamp but will also not sabotage the work of the two leaders.

Kang’ata, Kenyatta’s close ally in Central, says the team appreciates the heavy responsibility on its shoulders and is up to the task. He said the team is determined to deliver for their party leaders.

“The beauty about the new team is that we have the focus, the support of our leaders and the wherewithal to deliver the necessary reforms to give our country a break as far as our political problems are concerned. We will not waver, and nobody will stop us,” Kang’ata said.

Mr Wangwe said his troops are ready for the BBI in Parliament. “My troops are ready to deliver for the country. I urge my colleagues not to stare at the animal in the bush, but focus on delivering the BBI promise. We also urge that there should be no empty politics during this ongoing Covid-19 fight,” he said.

Kilonzo Jnr, who is holding brief for former Vice President Kalonzo Musyoka’s Wiper Democratic Movement, says the plan is to build as much consensus as possible to avoid a protracted referendum. He is also rooting for the Senate to process BBI first given it has less numbers to work with and is much easier to build consensus.

“As a leadership, I would also propose a joint committee of both Houses to scrutinise the proposals in order to distill the issues in advance,” he said.

Keynan says he is focused on delivering on the Big Four 4 Agenda, principles of the Handshake and BBI initiative.

“My role will be to make sure the president’s agenda is passed by the House...We look forward to teamwork, efficiency and realisation of the president’ agenda. This agenda is time bound, so he must be given all the support necessary,” said the Eldas MP.

Nominated Senator Isaac Mwaura, who was recently elected to sit in the Speakers’ Panel of the Senate, told The Standard that they will not condone any distractions from the core agenda of the government now that it has the full support of the main Opposition.

“We will make sure the president’s agenda is implemented. He is set to retire in two years so we need to support him to achieve his agenda,” Mwaura said.

According to former Dagoretti South MP Dennis Waweru, the parliamentary team is being supplemented by a combined party machinery outside the Houses.

“You could say the stars are well aligned at the moment. If there is an auspicious moment to deliver on what this country has always wanted, it is now. We are playing our roles behind the scenes to ensure the team delivers, and we are in full support of them,” Waweru said, speaking on behalf of former Central Kenya MPs who back Kenyatta.