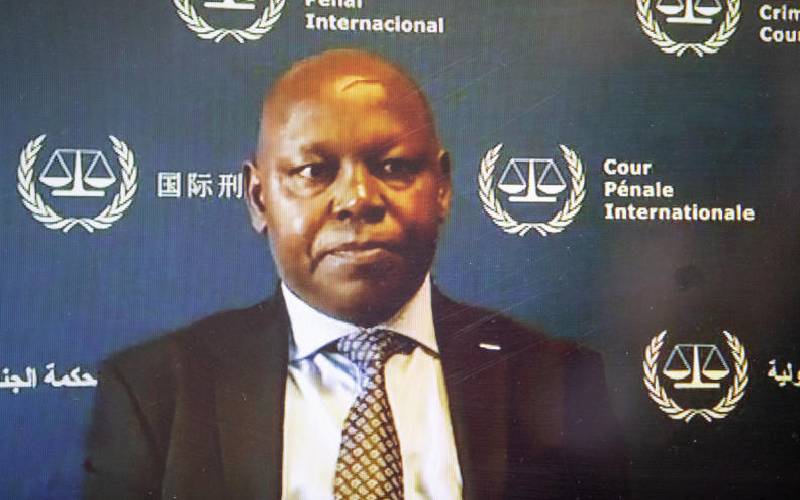 Judge Reine Adélaïde Sophie Alapini-Gansou of Pre-Trial Chamber A on Friday but with conditions restricting liberty.

On November 9, 2020, the Chamber received Gicheru's request for interim release under the Provisions of Article 60(2) of the Rome Statute.

Pre-Trial Chamber A's decision will be implemented as soon as the ICC Registry finalises all the necessary arrangements.

The arrest warrant against Gicheru and Philip Kipkoech Bett was issued under seal on March 10, 2015 and unsealed on September 10, 2015, for offences against the administration of justice consisting in corruptly influencing witnesses of the Court.

The first appearance of Gicheru before the Court took place on November 6, 2020. The confirmation of charges procedure will be conducted in writing to determine whether or not there is sufficient evidence to conduct the subsequent phase of the trial.

A statement on the ICC website says in the view of the Chamber, Gicheru's voluntary surrender demonstrates his concrete willingness to subject himself to the jurisdiction of the Court in relation to the allegations against him.

The Prosecutor did not oppose Gicheru's request for interim release together with conditions restricting liberty and that he is suspected of offences under article 70(1)(c) of the Rome Statute, consisting in corruptly influencing witnesses regarding cases from the situation in Kenya, which attract lower sanctions, if established.

“Moreover, the Chamber is of the view that the risks mentioned under article 58(1)(b) of the Rome Statute may be adequately mitigated by imposing conditions restricting liberty.”

The conditions restricting Gicheru's liberty are such as providing financial security to the ICC Registrar in the form of cash or bank order to the value of Sh1 million.

He is also required to comply fully with all orders issued in the case and surrender himself immediately to the relevant authorities if required.

Gicheru shall appear before the Chamber at the date, time, place, and in the manner ordered and shall remain in attendance until excused.

The restrictions also prevent Gicheru from obstructing the investigation or contacting, directly or indirectly, any of the witnesses or victims in this case, except through counsel authorised to represent him before the Court.

The Court further ordered Gicheru to not make any public statements, social media post, or communicate with the media about the merits of the case.

He shall reside in Kenya at a specific address for the duration of the proceedings when not present in the Netherlands for the purposes of court proceedings.

“…shall provide the Registrar with copies of all passports, visas, identity documents, and any other travel documents issued to him.”

In this duration, Gicheru will not travel internationally except to the extent permitted by the Chamber and shall inform the Registrar or his delegate, no later than seven days prior to any international travel.

He is further required to report once a week to the Registrar, his delegate, or other person(s) on the date and time and in the manner to be determined by the Registrar, which may include the use of video conferencing technology.

Gicheru will provide the Registrar with all mobile and other telephone numbers and shall ensure that at least one of his mobile telephone numbers remains active and with sufficient credit to be reachable at any time.

In the event that Gicheru fails to comply with any of the conditions restricting liberty specified, the Chamber may declare the financial security provided by Gicheru forfeit to the Court, issue a warrant of arrest and issue any other order it deems relevant in relation to a failure to comply with the conditions.