Jazz music filled the air last week in Nairobi when United States’ Air Force Band, based in Germany, came to perform their beautiful brass tunes to students from across the city.

Led by their conductor Josh Gates, the band had a wonderful time, first performing to the hundreds of youth who turned in the Korogocho slums. Korogocho is the home of the Ghetto Jazz Classics, an initiative of music diva Valentine Njoroge which has gained popularity by training youth to play Western music equipment.

Their most recent high was a performance during the Groove Awards in the Safaricom Arena at Kasarani.

When the Air Force band got to business it was hard to resist. The scene of kindergarten children in school uniform joining the dance floor was something to behold. 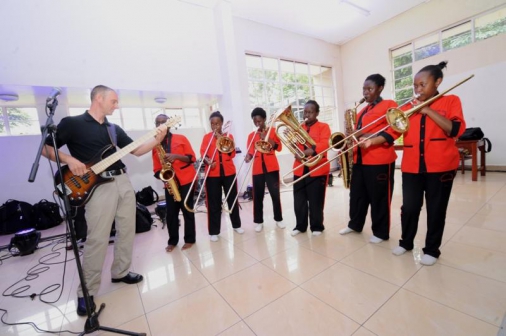 “Our mission here is to interact with young Kenyan musicians and share what we have in common as citizens of the world,” said the head of this popular music ensemble.

During the performances the group shared positive messages with the students to encourage and motivate them.

Their next stop was Nairobi School where they met the school’s famous brass band. This band is well-known for their formidable performances especially within the Kenya Schools music festival circles.

Here a combined force of the host and visiting band produced something of a hybrid to amazing effect; it came out as if they have been rehearsing for years yet it was just a short time they worked together before the performance.

“Our experience here and that of the students is that music is the same everywhere, it is a universal language,” said Josh.

But the group had saved the best for the last when they arrived at the Starehe Girls centre in Limuru.

Despite the chilly afternoon the sounds reverberating from the stage warmed up the air and it was some really good entertainment.

Here the girls showed they prowess not only in vocals, but also in playing the instruments. Later the visitors took some time off to show the girls just how much they could improve with practice and passion for the music.

“The group has been to the three institutions and it’s gratifying the amount of enthusiasm and the desire to learn from each other,” noted US Embassy Education and Cultural Advisor Ken Wakia.

A member of the band Senior Airman Paula Hunt described the experience at Starehe Girls as the best ever.

“The girls here are amazing; they are so disciplined and talented. It is good seeing such abundant talent blossom,” she said.

Accompanying the troupe was the US Embassy Cultural Attaché Amelia Broderick who said her country believes in building bridges and creating a peaceful world.

“When the interactions happen in the manner that they are happening now with music, people tend to understand the diversity but also similarities of our ways. This helps people work together,” she said.

Starehe Girls’ Principal Sister Jane Soita thanked the US government for the gesture, which she described as evidence of strong educational ties.

“All our 480 students come from a needy background and it would have been impossible to have such high level exchange and exposure without their intervention for which we are truly grateful,” she said.

And true, the students had picked some crucial lessons.

“Josh and his group have taught us a lot on vocal discipline, playing the sax, clarinet and flute and we don’t take this for granted,” said 14 year old Bushnell Atieno.

Starehe music teacher Moses Munene acknowledged that the process was not devoid of challenges citing the short time to blend as one of them.

The group sang Locked Away, Guantanamera, Vallu Valu and Kenya Nchi Yetu among others.

The US Air Force band performs all over the world with a mission to creating peace and better understanding of peoples.

By Joshua Irungu 1 hour ago
Opinion
Lessons from three generations of devolution
.