Nairobi
Mudavadi said Kenyans had since entered a debt trap that would trouble them for long. 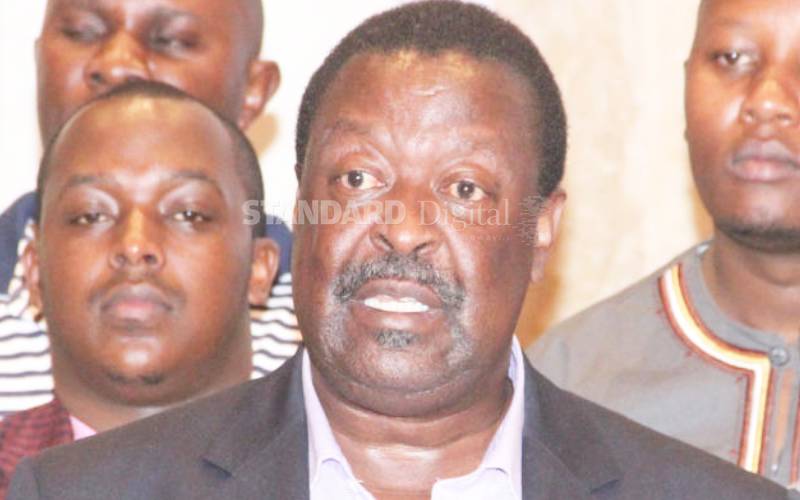 “It was unfair for a parliamentary committee to approve and increase debt ceiling from Sh6 trillion to Sh9 trillion when they cannot tell Kenyans how they arrived at the magical figure. Even some Members of Parliament raised questions on the issue, but the Treasury Cabinet Secretary was unable to make a justification,” said Mudavadi.     A World Bank report released last Wednesday warns that Kenya is drifting towards debt distress, owing to the Government’s huge appetite for high interest loans. The ANC party leader said even before the dust on new borrowing had settled, the Treasury CS had already made commitments to travel to Washington DC in US to negotiate with IMF and World Bank to borrow more money. “Now they have realised their mistakes of borrowing money with high interest rates. This time around, they are rushing to IMF and World Bank to borrow at lower interest rates. I have been a minister for Finance. Those arrangements will come with sanctions,” Mudavadi said. He regretted that Kenyans did not get value for their money because when debts push the country to the limits, it means the economy will definitely drop.

Mudavadi said Kenyans had since entered a debts trap that would trouble them for long. He said with such unprecedented borrowing, Kenyans would have crossed the threshold to debts distress, adding that the economy was bleeding because of some of the institutions that could have helped to accelerate the economy had collapsed. ANC also blamed Nairobi County Government Planning department for failing to approve architectural designs and construction worth Sh8 billion that had been submitted by various designers since June. “All systems have failed in this planning department. When plans are not approved, that means the construction industry is dealt a blow. How will the youth get employment if you deny them jobs,” he posed. He also called for peaceful campaigns in Kibra before the November 7 by-election, adding that leaders should instead compete based on policies.