How Alicia has been Roasted like millets fit for a snack 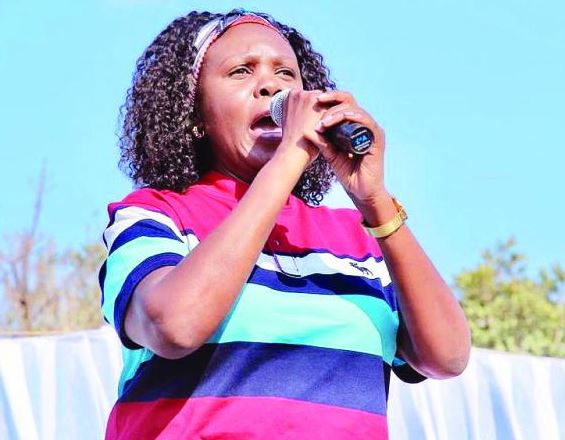 As the aircraft sped through the dark sky, there was panic as Tundu Lissu’s bleeding body was wracked by spasms triggered by cardiac arrest.

By his side was his wife, Alicia Bosensera Magabe (pictured), who even as she tearfully entreated God to spare the husband’s life, could see angels reaching out to spirit away his soul. Had she unwittingly escorted the man she loved on his final journey to meet his maker?

But in the chaotic confines, she watched through teary eyes as a team of medics performed a miracle. A feeble heartbeat signaled that Tundu was back in the land of the living, and the Pearly Gates swung shut. God had answered Alicia’s prayers and her husband would not die high up in the clouds on an emergency flight to Nairobi Hospital.

The nightmare started more than ten hours earlier on September 7, 2017. “I was at a friend’s house in Dar-es-Salaam when a WhatsApp message screamed that Tundu had been shot dead. The message was accompanied by graphic images of a bodyguard holding a bleeding Tundu,” Alicia said.

Three-years in exile: Tundu Lissu all set for grand return to Tanzania

That moment, Alicia — whose maiden name in Kuria means young millet that is ready to be roasted on fire for a breakfast snack — believes, marked the beginning of a new chapter that would test the limits of her love for her family, motherland and humanity.

The news of the shooting went viral and she got a call from the boarding master at her children’s school in Morogoro. The teacher wanted to know whether Alicia would like to tell her sons, Agostino Lissu and Edward Bulali, what had happened to their father. But she neither had answers nor any guarantees.

“I declined to talk to them. How could I tell them their daddy had been shot? At the time, I believed that my husband had been killed. I had never imagined breaking the news of my husband’s death to our children. It was terrible.”

In a candid interview with The Saturday Standard, Alicia traced her life from her days growing up in Dar-es-Salaam in the 1980s before the family relocated to New Delhi where her father, Col (Rtd) Ambrose Gasper Magabe, was posted by the government of Tanzania in 1982 as a military advisor.

She said she owes her symbolic maiden name to her mother, Justina Gati, who is of Kuria ancestry and hails from Tarime, which borders Migori County.

Looking back at the tumultuous events of the last three years, Alicia believes her family has been raked over hot coals. But at least she can now afford a few hearty chuckles as she points out that her husband’s cause thrust them into a fierce political fire that threatened to consume everything she cherished.

After the scare in the skies, Alicia narrated how the plane carrying her comatose husband and 10 medics and aides landed in Nairobi at midnight. Tundu was rushed to the hospital that would become the couple’s home for the next four months. Doctors fought to save his life, and after receiving news that some of the 16 bullets had been extracted, Alicia finally mustered up the courage to talk to her sons.

“It took me 24 hours and at first I did not know what to say. I told them their daddy had been shot and that he was being treated in Nairobi. But I could not tell them whether he was going to be okay.”

It took one month before the two sons could see their father, and they stayed in Nairobi for a week. They were back in the hospital over Christmas and New Year under the watchful gaze of armed police officers deployed to guard the opposition leader.

During the four months, Alicia would travel to the boys’ school to monitor their progress. Even after she moved to Belgium where her husband had been taken for specialised treatment, she flew back home to meet with the teachers and ensure the children’s education was not affected.

The danger to her husband and her family, however, had not gone away. During her stay in Nairobi, she was booked at a hotel near the hospital. But it emerged that she could be an easy target and she had to relocate.

Even when she flew back to Tanzania, she was forever alive to the fact that although Tundu had been shot in broad daylight by two gunmen, nobody had been arrested. The threats kept coming. As Tundu recuperated, an anonymous video clip was circulated warning the politician to remember that his mother and children were still in Tanzania and could be harmed if he continued criticising the government.

The shooting had also taken a psychological toll on the children who had nightmares of their father being gunned down. For their safety, they were relocated to a school in the US.

Life for Alicia and Tundu, however, has not always been about guns, gangsters and political arrests. Alicia’s voice mellowed as she recalled how she had met and become enchanted by her spouse, who she describes as the most political man she has ever known.

The two became acquainted after they were introduced to each other while undergoing compulsory military training in 1990, but it would not be until three years later that they started dating.

“Tundu started teasing that he would visit my father to ask for my hand in marriage. He was a close friend and had been consulting me on many issues, including girls. I thought he was joking but when he persisted, he won my love and we started dating,” Alicia said.

The lovebirds were both law students and in their last year, they did a joint research on the environment. Tundu would emerge as the best law student in the University of Dar-es-Salaam that year. In 1995, Tundu left for the UK to pursue a masters degree. He returned in July the following year and the couple got married a year later in November.

They graduated at a time the country was wooing investors to come and exploit its mineral resources. Owing to his interests and training, Tundu saw through the investors’ lies as they had peasants evicted from their ancestral lands. He dedicated his time in researching and documenting the atrocities committed against the poor.

While Tundu took the activism route, Alicia went on a different tangent. She first worked in the Attorney General’s office before moving to the National Environment Management Council where she rose to the head of legal affairs.

In a curious twist of fate, her husband spent most of his time exposing how people were being poisoned by miners or uprooted from their homes while Alicia’s organisation was supposed to ensure that mining companies did not violate the law.

It was a stressful time especially when her bosses started sidelining her, blaming Tundu for exposing them and making their work difficult. “When I realised that some assignments were being referred to my subordinates even though I was in charge of the legal department, I chose to resign instead of work in a toxic environment.”

Alicia later opened her own law firm but after the shooting, she closed shop and was relying on Tanganyika Law Society and Human Rights Society for her upkeep. Her husband’s medical bills were being paid by his political party, Chama cha Demokrasia na Maendeleo.

“I declined to handle finances because I would have been distracted. I wanted to dedicate all my energies to taking care of my husband by following up on his medication and security.”

When Tundu was sufficiently healed and decided to return to Tanzania, his family was disappointed. “I would have wanted him to stay away for some time but he declared that if he had to die, it was better to die for his motherland instead of spending his entire life hiding from killers,” Alicia said.

She also figured out that State agents had counted on splitting up her family and sabotaging everything they had sacrificed for. “I realise that had I left him, Tundu would have been distracted and instead of concentrating on his work, he would be thinking of starting another family. This is my advice to women who are suffering like me: do not allow your families to be torn apart by your oppressors.”

She added: “A bad father and husband cannot make a good leader. The family is the smallest unit of governance and if you cannot convince a small unit to support you, how can you persuade a whole nation?”

With Tanzanians going to the polls on October 28, Alicia expresses confidence that Tundu will be the next president. “If my husband wins the presidency but fails to have constitutional reforms, it will be like he never won. These are the foundations on which a new Tanzania must be built,” she said.

Even as Alicia dreams of a better tomorrow, the threat of violence is never far away. “A few days ago, a clip was released by a senior member of the ruling party. The man in the clip, who has powerful relatives, says that next time, they will not shoot Tundu but will kill him through an injection.”