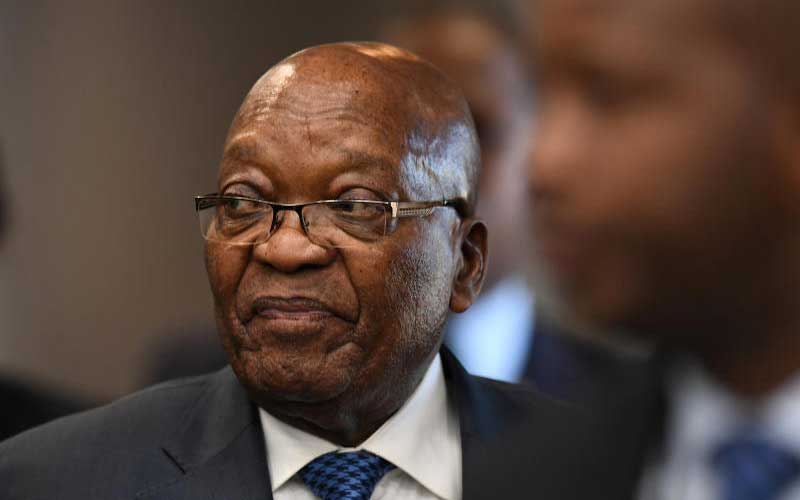 Over the course of his scandal-tainted career, South Africa's ex-president Jacob Zuma (pictured) accumulated 16 fraud charges, faced court over alleged rape and built a fervent fan base that continues to rattle politics.

He now faces a police investigation after walking out last week on a panel probing rampant state corruption during his nine-year reign.

After months of playing cat-and-mouse, it was expected he would be asked to take the witness stand.

Instead, Zuma and his lawyer did not return from a recess after the head of the judicial commission refused to recuse himself, as requested by Zuma.

On Monday, the commission announced it would "lay a criminal complaint with the South African police against Mr Zuma so that the police can investigate his conduct".

Aged 78, Zuma is also facing trial for allegedly receiving bribes in a multi-billion rand arms deal in 1999 when he was deputy president.

Yet the former leader remains popular. Whenever he appears in public, small crowds of loyalists gather without fail.

He has also maintained a solid network of supporters within the ANC, which critics say benefitted from his alleged dodgy dealings.

"He retains a kind of charismatic hold," said political researcher Richard Calland, author of the book "The Zuma Years".

"A manipulator of people. That is one of his core techniques as a politician."

Donning green-and-yellow ANC shirts with pro-Zuma slogans, supporters chanting apartheid liberation songs welcomed Zuma at the airport when he returned from a medical trip to Cuba in February.

They gathered again last month in the financial capital Johannesburg, protesting against a subpoena to appear before the anti-graft commission.

"I have never seen anyone vilified like him," said Zuma's close friend and ex-ANC spokesman Carl Niehaus.

Analysts and politicians disagree on the size of Zuma's current support base.

But even his disparagers acknowledge the power he wields.

Raised in a rural village in KwaZulu-Natal province, he worked his way up to the country's top job without formal schooling.

Married six times with over 20 children, Zuma embodies family values that resonate strongly in parts of the country.

"For many communities he represents someone who is really successful as a traditionalist," said University of Stellenbosch's political scientist Amanda Gouws.

Zuma's advocates are quick to point out his achievements which included free higher education for low-income students and expanding access for HIV/AIDS treatment.

"He was on the ground in the country, working with unions and in factories," said Sipho Seepe, a political analyst from Soweto.

His supporters are not only found on the streets, but also occupy strategic top-notch positions within the ANC.

There remains a "Zuma faction" that is openly disparaging of President Cyril Ramaphosa's governance, stoking intra-party gripes and extending his influence, said Gouws.

"The bark of that network is much greater than its bite," Calland added. "But they can obstruct and distract. They have a nuisance value... and resist at every available opportunity."

But could Zuma be using his support base to turn the public against the judiciary and evade justice?

"Sympathy serves to discredit whatever prosecution takes place against him, to create public pressure that could eventually make the ANC or other leaders grant him amnesty," Mbete said.

Zuma has been particularly outspoken in recent months, publically slamming Ramaphosa for probing in-party corruption and accusing his investigators of bias.

But some analysts believe he is clutching at straws and that years of probe are starting to bear fruit.

"The net is closing in on people around him," said Calland, and "he is fearful of that and has started to lash out".

But Zuma has several tricks up his sleeve. He still walks free despite years of legal work to bring him to the dock.

Some worry he will never end up behind bars.

Zuma has only faced the anti-corruption panel twice and testified once, in July 2019.

"I don't think there will be a smoking gun in Zuma's hand around state corruption," Mbete confided. "It is going to be very difficult to prosecute him."

Previous article
FIFA should retire No. 10 shirt after Maradona death – coach
Next article
Mukhisa Kituyi: Why I think I can be a good President