Some Kenyans are convinced that the Standard Gauge Railway (SGR) is a white elephant.

Then there are those who insist that the building of the SGR is perhaps the best thing that ever happened to this country.

Since its inception eight years ago, the SGR has been like the red-line that divides the fanatics of President Uhuru Kenyatta’s government and its critics.

Study points at folly of using SGR over trucks

From allegations of inflation of cost of construction to the mistreatment of local workers, the SGR has been serving Kenyans drama like a soap opera.

Now, as the government prepares to take over the operation of the passenger and freight services from Afristar, which is owned by China Road and Bridge Corporation (CRBC), by 2022, there are fears that these ghosts will continue haunting Uhuru’s flagship project.

That the Sh554 billion project is shrouded in controversy can be inferred from reports that the administration of former President Mwai Kibaki thought the construction of the modern railway was not urgent, deferring it to 2030 when they could ‘think’ of building it.

But somehow, President Kenyatta’s administration revived it, rushing its appraisal in a move that saw the Court of Appeal mid last year rule that procurement for the project was flawed.

It was Chirau Ali Mwakwere, the Transport Minister in August 12, 2009, who signed a memorandum of understanding for a feasibility study of the SGR with CRBC.

In fact, it was Mwakwere who had earlier head-hunted CRBC, as he told MPs in a past hearing. “I remember visiting China as the Minister of Foreign Affairs and learnt of their expertise and good work upon seeing their railway infrastructure. I, therefore, identified them, since they were already working in Kenya in road construction,” Mwakwere told the Ethics and Anti-Corruption Commission (EACC) during investigations into the tender.

“I also visited China as a member of President Kibaki’s entourage. Thereafter, I invited CRBC to my office for further discussions.”

That is why some critics have insisted that the SGR, which runs from the port city of Mombasa through Nairobi to Naivasha, is for China, with Kenya mostly left to shoulder the debt as it falls due.

Government officials and proponents of the SGR have dismissed these claims as conspiracy theory.

China, more than Kenya, was keen to see the SGR built. To be profitable, it had to be a regional line retracting not only the route of the lunatic line built earlier by the British in East Africa but also the Silk Road – an ancient network of trade routes that linked the regions of the ancient world in commerce. 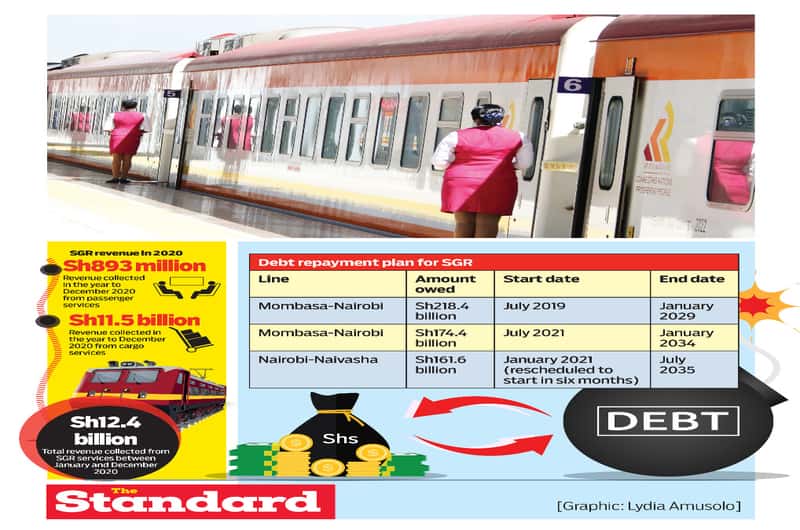 Indeed, it was China, through CRBC that offered to do a free feasibility study for the Kenyan government on the construction of SGR from Mombasa to Malaba.

Around 2000, Beijing, hitherto largely a recipient of foreign direct investment, decided that it had amassed enough hard currency, particularly US dollars, which it could deploy in different parts of the world in what has come to be known as its ‘going out strategy’.

The Chinese were holding onto a huge cache of US dollar reserves, which had worryingly started giving them low returns. The global financial crisis of 2008 only added to the unease as many Chinese investors feared that the huge dollar reserves would lose value as the American economy sunk.

It was generally agreed that China would be better off investing in other types of assets overseas that had better returns.

Chinese State corporations, fired up by the massive dollar reserves, invaded Africa and other developing countries in a manner that was not so dissimilar to the earlier incursion of the European missionaries and explorers in early 20th Century.

In 2013, the Chinese government started pushing for a new One Belt, One Road (OBOR) initiative in which the Asian country tried to retrace the ancient Silk Road on the global map.

Eventually the deal was inked and the line has been built at a cost of Sh392.7 billion, which was borrowed from the Chinese government to build the line from Mombasa to Nairobi.

It was later extended to Naivasha town in Nakuru County. Interestingly, the feasibility study done by CRBC did not have the Naivasha SGR section. This extension pushed up the cost of the project by Sh161.6 billion.

The SGR was to run from Mombasa through Nairobi to Kisumu and finally Malaba before snaking into Uganda through Tororo. Kenya was to start repaying the loan for the Nairobi-Naivasha line in January, the first payment of the Mombasa-Nairobi line having been made in July 2019.

Government officials have insisted that Naivasha was chosen for its industrial potential.

President Kenyatta even gave land to South Sudan and Uganda for development of their own inland ports in Naivasha.

Unfortunately, the two countries have still not been plugged into the SGR, which was initially designed as an East African Community project. CRBC had identified Kenya, Rwanda, South Sudan, Uganda and Ethiopia as integral to the viability of the modern railway.

But with most of the countries yet to develop their sections of the railway and Ethiopia looking on towards Eritrea and Djibouti, Kenya may have been left alone.

The government has refuted claims that the country was denied the funds for the Naivasha-Kisumu section, and remained optimistic the project would be completed. When launching the passenger train from Nairobi to Naivasha, President Kenyatta gave a hint: “Let me assure you that even the section that remains, we will complete.”

Hinting at how tough things were for the project, the president said any journey had its challenges. “But when you go to the bathroom, you have to take off your clothes,” he said in Kiswahili. “There will be difficulties on the road, but that should never stop or deter us from moving forward.”

Whereas the passenger trains have enabled easier movement of people on the Nairobi-Mombasa route, cutting the travel time to four hours in case of the express train, the cargo service has continued to struggle.

Assuming that nearly all of the cargo that goes into and out of the country passes through the Port of Mombasa and loaded onto the SGR, an earlier study done by The Standard found that the traffic was not enough to make the SGR viable financially and economically.

All the freight traffic – exports and imports – sums up to less than 15 million tonnes in a year; the SGR has an annual capacity of 20 million tonnes.

According to an earlier study by the World Bank, for the SGR to recoup its investments and impact the economy, it had to carry up to 55.2 million tonnes annually.

But the government has insisted that this was long-term investment.

There was more drama in Kiamokama Ward by-election in Kisii where a candidate was arrested over allegations of voter bribery.