Why is tax collection under Uhuru not keeping up with economic growth? 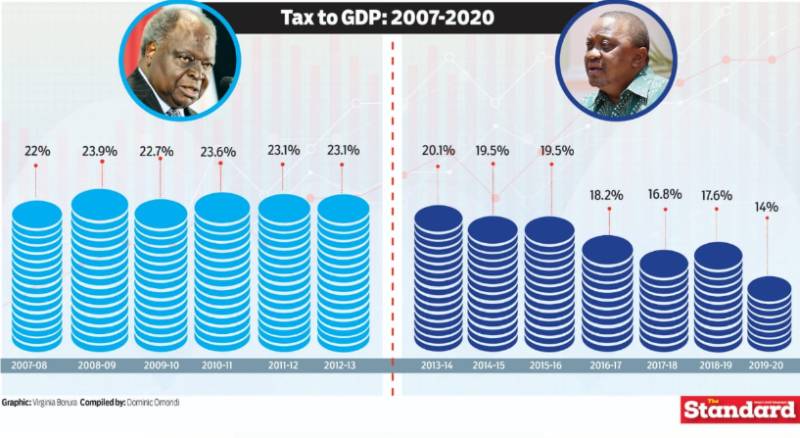 In the seven years since Uhuru Kenyatta’s first Finance minister Henry Rotich read out his first Budget, the economy has registered robust growth.

This has been seen in the increase in gross domestic product, which captures the size of an economy by giving a cash value to the goods and services produced within a country's boundaries over a specific period.

However, his economic policymakers have been at pains to explain why tax collections have not kept up with this economic growth.

Since the 2013-14 financial year, tax revenues as a percentage of GDP have largely been on the decline.

This past financial year, which was disrupted by the coronavirus pandemic in its last four months, will see a record low in tax to GDP ratio in more than a decade at 14 per cent - assuming the taxman hit its revised target of Sh1.49 trillion on June 30, 2020.

Already, the latest data from the Treasury shows tax collections slumped to a five-year low in May, as the negative effects of Covid-19 hit government coffers. Taxpayers gave the government Sh90 billion, a drop of slightly over a third from Sh134 billion that the taxman collected in May 2019.

As a result, in the 11 months to May 2020, the Kenya Revenue Authority had collected Sh1.33 trillion.

Economists and policymakers have raised concerns about taxes not growing as fast as economic activity. A growing GDP means more transactions are being registered, which should ideally translate into more revenue for the government, as workers and businesses pay more in taxes as a result of the increased money they make.

But this has not been the case.

In seven years, Uhuru's administration has not seen a consistent uptick in tax to GDP ratios. Yet, in the seven years to the end of former President Mwai Kibaki's term, the increase in tax revenue largely kept up with economic growth, with the only noticeable dip being in the 2009-2010 financial year, when the economy was recovering from the effects of the 2009 global recession.

Back in 2014, about a year after Uhuru was sworn in, the Kenyan economy was rebased to take into account industries like telecoms that were driving new growth, and to better capture the size of sectors like agriculture and manufacturing.

This increased Kenya's GDP by 25.3 per cent, making the country the ninth-largest economy in Africa, up from position 12 - it overtook Ghana, Tunisia and Ethiopia.

It also saw Kenya classified as a middle-income economy, and increased its growth rate in 2013 to 5.7 per cent, up from an earlier 4.7 per cent.

A more important upside for the new administration was that the country's debt to GDP ratio went down, giving the government more room to borrow to finance various infrastructure projects.

But this cocktail of factors has since seen the economy plunge deeper into debt to plug the Budget deficit - the difference between what a country spends and what it earns through tax revenues.

In a past interview, former Treasury Principal Secretary Kamau Thugge told The Standard that this situation was not entirely bad as the robust economic performance meant citizens were enjoying better standards of living.

But the World Bank, in one of its bi-annual updates on the Kenyan economy in 2018, noted that even though more goods and services were being transacted in the country, very little of these transactions translated into taxes.

“Although it (revenues) grew by 13.3 per cent in nominal terms in (financial year) 16/17, tax revenues expanded by less than nominal GDP at 14.9 per cent, hence the tax-to-GDP ratio fell to 16.9 per cent of GDP — its  lowest  level in a decade,” it said in its 16th edition of the Kenya Economic Update.

Tax buoyancy - which measures the efficiency and responsiveness of revenue mobilisation to GDP growth - has worryingly declined over the years.

“This (decline in tax buoyancy) is something that Kenya will have to address if it is to achieve what it wants,” said Standard Chartered economist Razia Khan.

The decline boils down to either the growth figures are incorrect, or a lot of people are evading or avoiding taxes. It could also be that the country’s tax regime is littered with a lot of gaps, which means the government is losing revenue, sometimes due to unnecessary tax exemptions.

The government has previously blamed low tax buoyancy on the expansion of agriculture’s contribution to GDP. Agriculture, the mainstay of Kenya’s economy, is not such a healthy cash cow for State coffers like, for instance, manufacturing is.

Not only is the sector largely a subsistence one, it also enjoys a lot of exemptions aimed at ensuring that Kenya is food secure.

In an effort to address the gaps, the government has been going after tax cheats more aggressively to seal gaps in tax compliance, and has introduced new taxes like turnover tax that capture a larger segment of businesses, and lumped various levies into everyday products like fuel.

By Special Correspondent | 16 days ago

By Allan Mungai and Boniface Mithika | 24 days ago