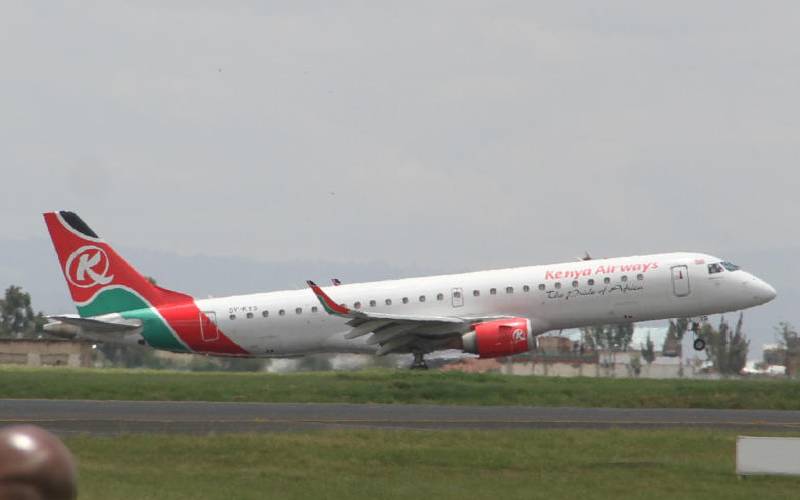 A Bill that seeks to have the government take over ownership of ailing national carrier Kenya Airways (KQ) will be tabled in the National Assembly today.

The House’s Transport Committee recommended last year that the government pushes out a consortium of local banks and its long-time partner Royal Dutch Airlines (KLM), and other shareholders.

The Pokot South MP David Pkosing-led committee had recommended the nationalisation of KQ after several attempts to revive it failed.

The National Aviation Management Bill, 2020 seeks to establish the National Civil Aviation Council that will oversee the creation of a new outfit, Kenya Aviation Corporation (KAC), to run the national carrier.

The National Civil Aviation Council will be chaired by the president and shall integrate policies relating to the aviation sector and the other sectors of the economy.

This will enable all the national organs and the sectors of the economy requiring access and support of the civil aviation sector to cooperate and work with the sector to ensure effective execution of its mandate.

It will also incorporate cabinet secretaries for Transport, Internal Security, National Treasury and the Attorney-General and Kenya Air Force Commander.

The Pkosing report that formed the basis of the Bill wanted the government to have Kenya Airports Authority, Jomo Kenyatta International Airport, KQ and a centralised Aviation Services College that will bring together institutes held by the three agencies to be put under Kenya Aviation Holding Group (KAHG).

“The resources of the Aviation Holding Company and any revenue generated from such resources must be utilised for the mutual benefit and development of all its subsidiaries,” reads the report.

The Bill follows the rejection of the proposed Kenya Airways’ Privately Initiated Investment Proposal (PIIP) to hive away Jomo Kenyatta International Airport from KAA to form an independent parastatal run by KQ.

The PIIP deal raised an uproar among Kenyans and in Parliament, with people questioning how a loss-making private firm would run a profitable government parastatal whose annual collections amounted to Sh12 billion.

If the nationalisation process is adopted by the National Assembly, the government will be forced to spend hundreds of billions to buy out the 51.1 per cent worth of shares owned by outsiders.

KQ is currently 48.9 per cent owned by the government, 7.8 per cent by KLM, 38.1 per cent by a group of 10 local banks while KQ employees and other Kenyan investors hold 5.2 per cent.

The loan was converted into shares following the restructuring of KQ in 2017.

On the face, it would mean that if the government were to buy out the other shareholders, it would have to fork out about Sh11.4 billion.

Pkosing told The Standard that once tabled, and passed, the proposed law could be ready in August for presidential assent.

“Once we are done and President Uhuru Kenyatta signs it into law, by September, the government will begin its operationalisation that will see the rebirth of Kenya Airways into a continental giant,” he said.

He added that if the Bill is passed into law, the airline will save Sh5 billion on handling services, maintenance and other services it paid JKIA.

“We want to see the Kenya Aviation Corporation (KAC) handle 30 million passengers in the near future from the seven million they are doing now.

“This will mean more jobs for our youth and billions of shillings in revenue that will accrue from passengers’ spending,” Pkosing said.