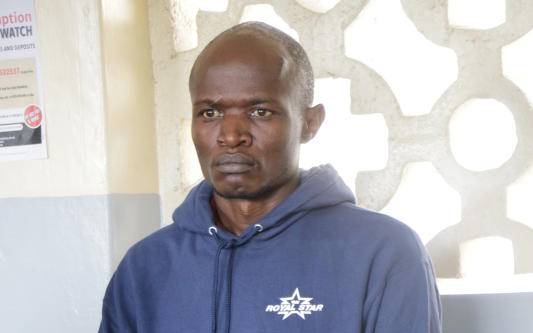 A Nakuru court has ordered Rift Valley Provision General Hospital (PGH) to produce the medical report on the health of a police officer’s lover and her sister after they were set on fire. Phanis Nyabaro, 27, and her sister who is 17 years-old were allegedly set on fire by Nyabaro’s husband Saka Achimba (pictured), a constable attached at Critical Infrastructure Protection Unit in Rongai Sub County allegedly. Achimba was charged with the attempted murder of the two before Nakuru Principal Magistrate Bernard Mararo. He allegedly doused the two with petrol, torched them and left them in critical conditions on December 28, 2019 at Nyabaro’s kiosk in Fire AP line within Bondeni Estate in Nakuru County. The accused is said to have committed the crime over a suspected love triangle saga. Nyabaro and her sister sustained 18 and eight per cent burns respectively on their neck, face, arms and legs Achimba has denied the charges. However, he has remained in custody since December 28, last year, when he was apprehended. This was after he was denied bail until the victims who were in critical conditions record their statements and their health conditions report is availed in court. The court heard that the accused was a threat to the victims since he knows their place of residence and he is aware that they are in hospital. However, Principal Magistrate Mararo ordered the Ministry of Health at PGH to avail the medical evidence of the victims by tomorrow. Mr Mararo noted that the accused has been in custody for long and the medical report delay has denied him his right to be released on bail. “The medical report has delayed the case and the accused person has been in custody since December 28, last year. It is in the interest of justice that the report be availed as soon as possible,” directed Mr Mararo. Prosecutor Nelly Waweru had requested for the order to be extracted after the hospital declined to release the medical report with a court order. “The hospital demanded an order to furnish the prosecution with the medical report,” said Ms Waweru.

Emmanuel Too 2 hours ago