Rigathi Gachagua stars in sideshows to steal the show

By Peter Kimani | 6mos ago 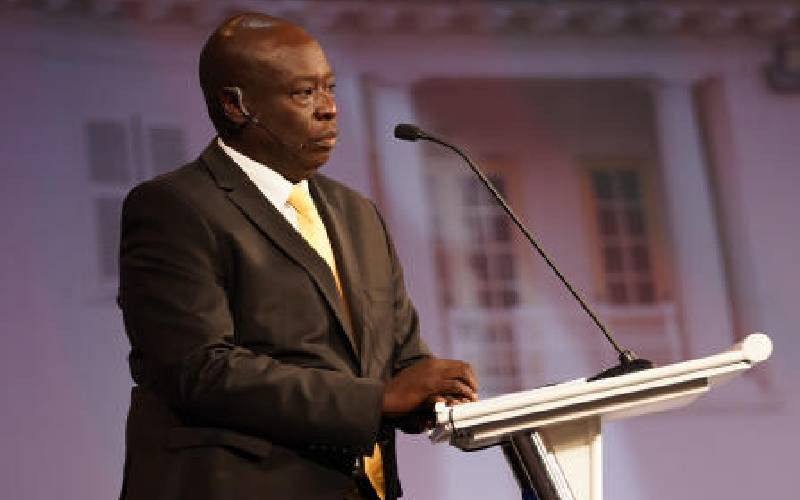 All of a sudden, the July weather has dissipated and it is melting hot. At least there’s plenty of heat generated by Kenyans on Twitter — the virtual army that takes no prisoners. Their enthusiasm for Kenya Kwanza running mate Rigathi Gachagua, to use the clichéd expression, has been palpable, since his starring role in the running mates’ TV debate this week.

It was a debacle, really, and Gachagua, a man usually captured in ill-fitting clothes, arrived for the show as the undisputed underdog because, to use Kandara MP Alice Wahome’s salty vocabulary, some suspected him to be a “dimwit.”

When Wahome speaks, please take her word with a pinch of salt; the last time she tried to unpack the “bottom up” economic model, she said you start at the bottom, going down.

As for Gachagua’s reputation, I don’t think she was suspected of anything else besides being a graft suspect, with pending trial. And there are many such politicians. Anyhow, it’s this kind of bad press that first saw Gachagua threaten he wouldn’t appear for debate, allegedly because the media was biased against him and his Kenya Kwanza team-mates.

By contrast, Gachagua’s opponent on TV, the self-styled “Iron Lady” of Kenyan politics, Martha Wangari Karua, a decorated lawyer and politician, was long projected to be the star of the night. She had confirmed attendance early enough and she appeared resplendent in her flowing dress. In the circumstances, Karua spent most of the night open-mouthed, staring at Gachagua as he delivered the performance of his life. I think it’s the brilliance of his face, freshly powdered and looking dapper in his well-cut suit that she found mesmerising.

Gachagua declared he wouldn’t entertain side-shows: he was there to sell the manifesto of his party and his vision of the future. I don’t know if he’d consider his powdered nose a sideshow.

Back to the TV show, we quickly understood Gachagua had a rehearsed script. He had been rehearsing all those weeks he claimed he wouldn’t appear. And then he fished out a real script from his inner pocket — such antics are not allowed in a debate — as he read a description of what constitutes “State capture.” Gachagua also knew the master of this phenomenon to be Prezzo UK.

So focused was Gachagua that, perhaps, to avoid the prospects of going off-script and bungling, we suspect that had he been asked to repeat his name, he’d have said “Uhuru Kenyatta!” All in all, he used Prezzo UK’s name 75 times in a 90-minute conversation.

If Gachagua’s mind was stuck on Prezzo UK’s name, it appears his hearing was similarly impeded, as when he was asked to explain how he made Sh12.5 billion over the last 10 years. The question was repeated three times.

I do not think Gachagua is hard on hearing, he’s simply tired of having to explain the magic of raising such a sum from a modest investment of a reported Sh200 million. I guess for him, money is nothing more than a number. That explains why he said his wealth is a mere Sh800 million, discounting the Sh12.5 billion frozen by the government as suspected proceeds of corruption.

The show was over before Karua could find her tongue, but a biased media predictably did not praise Gachagua’s stellar performance. They simply lamented about Karua’s underperformance.

Perhaps she, too, needs to find a leitmotif that explains away any element of her life that she just can’t explain, the Gachagua way.

2NK driver whose wife has given birth to 5 babies: 'I'm now a father of six at 28'
Rift Valley
By Kennedy Gachuhi
1 hr ago
Premium Karen Nyamu: Samidoh is a very responsible father
SCANDALS
By Benjamin Imende
1 hr ago
Easy recipe: Mozambican Peri Peri chicken
Food
By Lolita Bunde
2 hrs ago
Be careful when hiring family, friends to your business
Career Tips
By Peter Theuri
2 hrs ago
.