Kenya's expenditure to rise by Sh200b in 2022 election year

The Government’s spending will increase by Sh200 billion over the 2022-23 financial year, according to new budget documents in which the National Treasury has also set aside funds for next year’s general elections.

Treasury also cautions that the country is still grappling with the impact of Covid-19 on the economy and it is pushing to cut non-core expenditure by government agencies.

The budget for the next financial year has gone up by 16.5 per cent to Sh3.228 trillion from Sh3.03 trillion this year.

This will be financed through tax collection by Kenya Revenue Authority (KRA), whose target has been set at Sh2.14 trillion, 18.7 per cent above the target for the current financial year that stands at Sh2 .03 trillion.

Total revenue for the 2022-23 financial year, including funds collected by government agencies (or appropriations-in-aid), is expected to reach Sh2.41 trillion.

“The overall expenditure and net lending are projected at Sh3.228 trillion (23.5 per cent of GDP),” said Treasury in the Budget Review and Outlook Paper (Brop).

Treasury said the revenue performance will be underpinned by ongoing reforms in tax policy and revenue administration and boosted by economic recovery occasioned by implementation of priority programmes under the Economic Recovery Strategy, the Big Four Agenda and others outlined in the Medium Term Plan III of Vision 2030.

Total recurrent spending is set at Sh2.14 trillion while development expenditure will amount to Sh675.

The transfers to counties will be at the same levels as the current financial year. 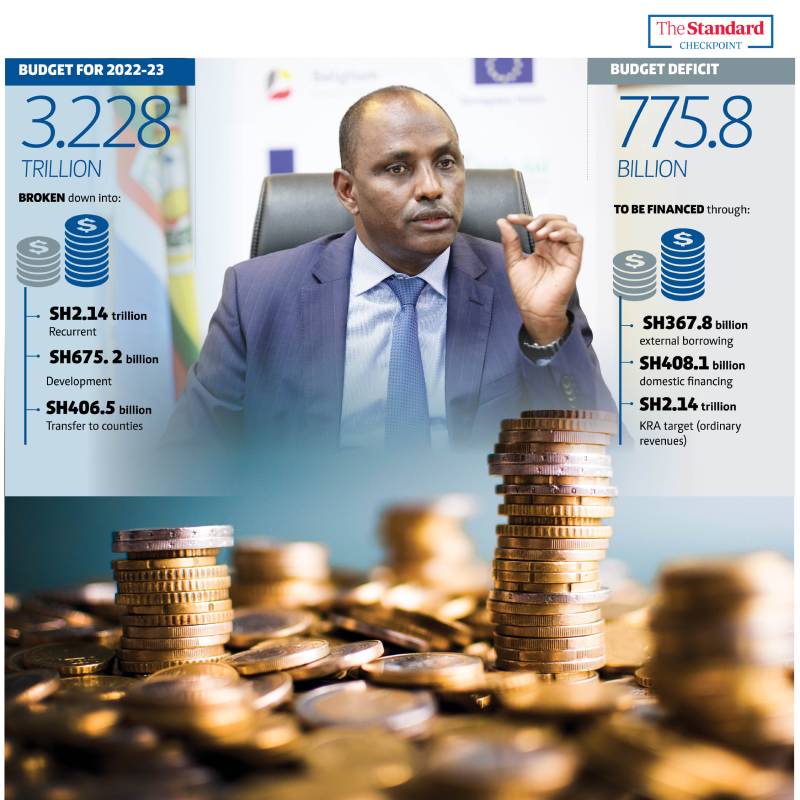 Among the most watched allocations for the year will be the Independent Electoral and Boundaries Commission (IEBC), which is readying to conduct next year’s general elections.

The commission, according to the Brop, will be given Sh16.5 billion over the 2022-23 financial year for salaries and wages.

This will be in addition to Sh14.2 billion that it has been allocated in the current financial year for the same expenditure, expected to enable the commission to start preparations for the polls including recruitment of additional staff.

Treasury expects the budget deficit for the year to stand at Sh775 billion, 16.5 per cent lower than the Sh929.7 billion for the current year.

This deficit will be financed through foreign loans, both commercial and concessional, amounting to Sh367.8 billion and domestic borrowing of Sh408.1 billion.

Of the proportion that will be financed through foreign debt, Treasury indicated that Sh105.6 billion will be through a sovereign bond.

Treasury is optimistic that the economy, which has been severely battered by the coronavirus pandemic, will recover during the current financial year to register 6.2 per cent growth.

Next year’s elections are, however, expected to slow down the economy again.

“Kenya’s economy is projected to recover from the effects of Covid-19 pandemic and grow at a rate of 6.2 per cent in 2021-22 from a slowdown in 2020-21 financial year,” said Treasury in the budget paper.

“Economic growth is thereafter projected to slow down to 5.9 per cent in 2022-23 financial year, largely due to the uncertainty associated with the general election, and recover to 6.3 per cent by 2025-26 financial year.”

UDA dilemma as it seeks to enter ODM stronghold

Construction of the stadium started in 2014, but it has now been turned into a drinking den and an open defaecation site.

By Moses Omusolo | 14 hours ago