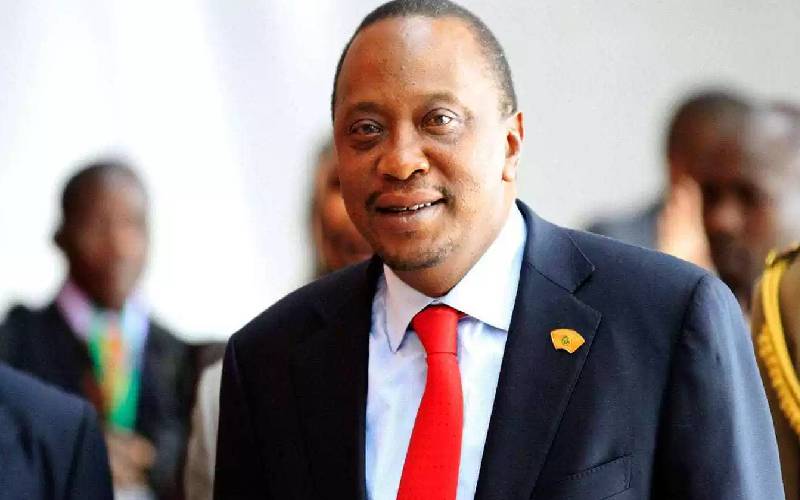 President Uhuru Kenyatta (pictured) goes live on television tomorrow to address Kenyans on a raft of issues facing the country in his second State of the Nation address since his re-election in 2017.

The long-awaited speech comes against the backdrop of mind-boggling cases of corruption, whose tracks lead right to top offices. At least five Cabinet secretaries (CSs) have been questioned in the ongoing graft probe, among them Henry Rotich, the bearer of the key to the National Treasury.

The ever surging swirl of corruption has given Uhuru-Ruto government a bad name with the media revealing fresh scandals almost on a daily basis. Corruption appears to have not only been devolved but also liberalised.

Interestingly, some leaders read in the heightened war against corruption a political agenda directed at the Uhuru succession.

In Parliament, MPs are plotting to tame the powers of the two key offices; Directorate of Criminal Investigations and Directorate of Public Prosecutions, that have taken the fight on graft a notch up.

But despite the almost daily repudiation of corruption and declaration of war against the vice, Kenyans are impatient with the President as they await his next course of action to curb the brazen theft of public funds.

It is this expectation balanced against the shocking levels of audacity and deviousness of the corrupt in his government that prompts the question: What is the President’s last bullet to save Kenyans from this mindless plunder, secure his own credibility and the legacy of his two-term rule?

Different leaders interviewed by The Standard yesterday said they would like to see the President taking an even tougher stance to wrestle down the dragon of corruption.

Former Jubilee Party vice chairman David Murathe said the President’s speech is likely to be dominated by 'handshake' talk and the intensified war on corruption.

“For sure the issue of the fight against corruption and leaving behind a united Kenya will dominate the speech. He will have to appraise the country on how he will slay the dragon of corruption,” Mr Murathe said.

“The President will reiterate his commitment to the handshake as part of his quest to leave a legacy of a united country. Those apposed to the handshake then will have to tell the country why they want to divide Kenyans," he said, referring to the March 9, 2018 truce between President Kenyatta and opposition leader Raila Odinga following the disputed presidential vote.

Deputy President William Ruto and his allies have, however, accused Raila of using the deal to rock the Jubilee Party and allege the war against corruption is being waged in a partisan manner to influence the Uhuru succession.

Yesterday, Raila accused some politicians of sabotaging the fight against corruption through incitement, distortions and attempts to weaken the DCI and DPP.

"We want to remove Kenya from that league (of corrupt states) but some people want to derail us," said Raila in Mombasa during the launch of biometric listing of Kenyans.

Law Society of Kenya President Allen Gichuhi said he expects to hear the President's plans to increase resources to institutions charged with the war on corruption.

“He has already said a lot about corruption for the past one year. I want him now to say if the State is going to increase resources to offices of DPP, EACC, DCI and Judiciary. We want to hear what his proposal is for capacity building in those institutions such as expanding courts and hiring magistrates,” said Gichuhi.

National unity, the state of the economy, the ballooning national debt and how the Government intends to achieve the Big 4 agenda with just about three years left are other topics likely to dominate President Kenyatta’s address to the joint sitting of Parliament.

According to National Assembly Leader of Majority Aden Duale, Kenyans expect the President to speak on the progress of the Big 4 agenda, national unity and also the state of national security.

“The President will outline issues which are important to Kenyans such as manufacturing, housing, universal health and food security. The President is also expected to address the nation on national security and the key investments the Government has put in place to secure the country,” he said.

Duale added: “He will further tell Kenyans about his unity deal under the handshake with former Prime Minister Raila Odinga and how it will help the country end ethnic and divisive politics so that he can leave behind a united country when he retires.”

Senate Majority Leader Kipchumba Murkomen said the President has to pronounce himself on the state of the economy and unemployment, which pose a threat to the national fabric.

“I look forward to the President addressing matters of economy as a priority. The greatest threat to national unity and security is not politics as some claim but unemployment among the youth and I expect him to talk about how to tackle the issue. He will also have to talk about what the Government has done to support the institutions fighting graft. The President ought to revisit the Jubilee polices on food security,” Murkomen added.

Kirinyaga Governor Anne Waiguru said President Uhuru should address the independence of institutions fighting graft and separation of powers between the investigative and prosecuting agencies.

Waiguru also expects the President to talk about the debt burden and economic growth.

“There are complaints among the business community over the slow pace of businesses and, obviously, if the growth is slow, then it affects people directly. Lastly, we want the President to appraise the country on the Building Bridges Initiative and his position on the referendum push?” she said.

Political analyst Elias Mokua said the President should convince Kenyans how he intends to achieve his pledges given the already politicised war against graft. Dr Mokua said Uhuru should address the shameful issue of hunger, which keeps recurring in spite of assurances that the Government has adequate food.

National Council of Churches of Kenya (NCCK) Secretary General Canon Peter Karanja wants Uhuru to address the issue of referendum to tame the winner-take-it-all polls. He also spoke about the divisive war on corruption where the Executive appears to read from different scripts.

“The President should shed more light on the current national debate on toxic elections. He should state he supports a national consultative programme also pushed by NCCK that will solve the matter and not result in a contested referendum,” Canon Karanja added.

Kenya National Commission on Human Rights vice chairman George Morara said he expects the President to give the clearest signal that action will be taken again graft suspects.

“It is time we started seeing action against all those implicated in corruption... We want to see heads roll, whether those heads belong to the President's sister, his brother or his closest political ally. Although investigations are still ongoing, the President has enough information to start giving marching orders to those whom he appointed to his Government but who, instead of working with him to serve the Kenyan people have become the biggest enemies of the people because of their involvement in the plunder of State resources,” he said.