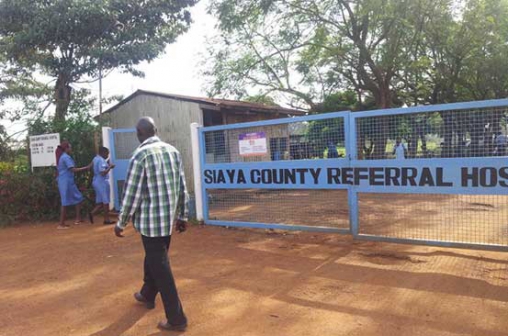 Siaya Referral Hospital is on the spot over alleged theft of one-day-old baby girl.

And three protesters were shot dead while three others suffered bullet injuries in Bondo town when they tried to overrun a police station to lynch two suspected kidnappers.

There are conflicting reports on two suspects who were frogmarched to Bondo Police Station, sparking a demonstration that resulted into the deaths on Wednesday evening.

Bondo residents cornered the suspects in Bondo town after they could explain their relationship with the one-day-old baby they had allegedly taken from the Siaya Referral Hospital.

Families search for kin taken away by armed men

Investigations by The Standard have come up with conflicting statements between the police, the hospital and the alleged kidnappers who have since been released from police custody.

Even though the child’s father Jared Oyomba maintained that he had validly discharged the baby from the hospital, the hospital has moved to dismiss the claims, saying the baby was safe in the nursery.

According to Bondo OCPD Paul Kiarie, the public went to the station with two women who were carrying a one-day-old baby, and reported that they were child kidnappers.

“When we received the report, we requested the public to give us time to interrogate the suspects and take appropriate action. But they disagreed with us and started a confrontation,” said Kiarie.

He said the suspects provided documents showing the baby had been discharged from Siaya Referral Hospital, a day after being delivered through caesarean section. Its mother Mary Atieno had passed on after the procedure.

“The women demonstrated that they were validly with the baby and we even traced the father,” said Kiarie.

The enraged public was not convinced and demanded their released for mob justice. They pelted stones at the police station, damaging vehicles and widow panes.

The officers were forced to use teargas and live bullets, which left three dead and three others with bullet wounds. “The public had an intention of torching the station and that could have been dangerous so we had no other option,” said Kiarie.

He, however, said after taking records from the suspects, they were released, adding that the police confirmed with Siaya Referral Hospital where the baby was allegedly discharged from, and ascertained that there was no case of theft of baby.

It has, however, turned out that there could be a racket of kidnappers who are working with hospital staff to steal and sell babies.

The Standard yesterday visited the police station, Siaya Referral Hospital and the alleged father of the baby, who gave conflicting accounts.

Even though Siaya Hospital Deputy Geofrey Mwai confirmed the said maternal death, he denied claims that the said baby had been discharged.

This conflicts the statement from Bondo police that there were documents on discharge.

Mr Oyomba yesterday said he had visited the hospital in the company of his sisters who took the baby after the hospital advised the same. “We were taken back to Siaya Hospital using the hospital ambulance when we returned the baby, so I do not understand what the hospital’s intention is by denying the discharge,” he said.

Siaya Deputy Governor Wilson Ouma Onyango accused the police of provoking the public through the killings.

Five people have so far been shot dead by police in Siaya, after two others were gunned down and several others injured during anti-IEBC demonstrations.

A middle-aged man was rescued by police from angry members of the public who beat him up, accusing him of abducting a school boy.

By Brian Okoth and Winfrey Owino | 6 hours ago

By Mate Tongola | 9 hours ago