Nobel Prize: Why we should not weep for Ngugi wa Thiong’o

By Jennifer Muchiri | 8yrs ago 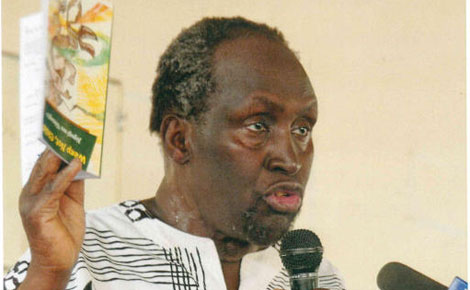 Ngugi wa Thiong’o, the father of Anglophone Kenyan literature, did not win the 2014 Nobel Prize for Literature, again. So what? It would be wonderful for a Kenyan writer and literature to be recognised through this prestigious award but the lack of it does not make Ngugi any less of a writer or indeed detract from his respected position as a literary icon.

The best way to celebrate Ngugi is to think about the concerns that he addresses in his books. Ngugi wa Thiong’o does not need to win the Nobel Prize for Literature to remain ever important to Kenyans. You only need to read or reread Weep Not, Child to appreciate the importance of Ngugi’s stories for Kenya today.

This year marks the 50th anniversary of Ngugi’s first novel, Weep Not, Child. The best we can do is to celebrate the thoughts he put together in this pioneering novel instead of weeping over a loss that never really was. If we are to weep, it should not be for Ngugi but for our nation; let us weep for the pains, frustrations and disillusionment that have characterised our nation for the past 50 years but not for missing out on a cheque and a plaque in Oslo.

Weep Not, Child tells the story of a young man called Njoroge who grows up in Central Kenya during the colonial period. His father, Ngotho, is a squatter on the land of his ancestors which was taken away from his family during the First World War and is currently owned by Jacobo, a fellow black man. Ngotho works on a white man’s farm, tending the land with utmost commitment with the hope that one day the colonialists will leave and the land will be returned to the rightful owners. Ngotho’s family is among the poorest in the village particularly since they have no land

One of Njoroge’s brothers, Mwangi, dies in the Second World War while the other, Boro, returns from the war to face disillusionment of poverty, landlessness and unemployment. Just like the Africans who returned from WWI found themselves without land, those who returned from WWII realised the colonial government would not reward them like they did the returning white soldiers.

Boro joins the Mau Mau in protest and this puts Ngotho’s entire family on a collision course with Chief Jacobo and the colonial government. Njoroge’s education is cut short when he is picked for questioning by the homeguards cracking down on Mau Mau. His young life is thus marked by the scars  of colonialism.

The story of Njoroge in Weep Not, Child is still much the story of our times. Squatters like Ngotho’s family still dot the Kenyan landscape. Land, the cause of the pain, frustration, torture, destruction, betrayal and death which marked the period of the war of independence is still very much the cause of similar problems in Kenya today.

From the Coast region to Western Kenya to Central region to Rift Valley, the land question remains the most sensitive and volatile issue in Kenya. The current debate about irregularly acquired land in Lamu where thousands of locals live as squatters on privately owned ranches that is their ancestral land is a replay of Ngotho’s situation in the novel. The Jacobos of the colonial period are very much alive today in the form of wealthy businessmen who fence off public land and leave the locals dispossessed and dislocated.

The tension between the Lands ministry and the National Land Commission will not end any time soon; not until political beneficiaries of suspect land deals have eaten to their fill. What this means is that Kenyans will continue weeping about land until the truth about who owns what and how they came to own it is addressed. Every Kenyan who desires to understand the source of the problem that is land in Kenya needs to read Weep Not, Child. Young Kenyans need to read this novel to understand part of Kenya’s colonial history.

Njoroge and his family dreamt that acquiring an education would automatically deliver them from poverty.

Fifty years after independence, Kenyan children still dream that education might one day offer a way out of their drudgery. Unfortunately, education remains the preserve of the rich. State schools are run down, classrooms are overcrowded, teachers are overwhelmed and the illusion of free education remains just that, illusion. News abounds of counties where children shelter under trees to be taught by administration police officers. Illiteracy, supposedly one of the enemies of development at the time of independence, is yet to be addressed. Shouldn’t we weep that Njoroge’s dream is yet to be fulfilled?

What has changed in the lives of ordinary Kenyans in the few weeks that Kenya has been ranked among the best economies in Africa? Will the prices of food reduce? Will there be an increase in the minimum wage? Will the word ‘poverty’ be forever deleted from our national vocabulary? Will the menace of unemployment suddenly disappear?

The social-economic stratification that Ngugi wept about 50 years ago still exists today. The homeguards class has been replaced by the political elite and the poverty stricken squatters have only increased in numbers. The gap between the rich and the poor continues to widen as millions of Kenyans get constantly disenfranchised.

How can we explain the blatant opulence often exhibited by politicians in the faces of the haggard-looking citizens who voted for them? The current political class, just like Jacobo in the novel, is only interested in propagating their personal projects at the expense of Kenyans’ livelihoods. Even as Kenyans hope that the new constitution will make their lives better, elected leaders are shooting at each other in their fight to control public resources. Isn’t this what we should be weeping about?

The period of the State of Emergency and the Mau Mau war was one of darkest period in the history of this country. Tension was high and people’s lives were marked by fear of breaking curfews, detention, violence, humiliation and death. Is the situation any different now? Don’t we still live in fear of terrorist attacks, crime and harassment by police officers who are supposed to protect lives and property? Aren’t there cases of suspects being tortured to death in police cells just like suspected Mau Mau were tortured in homeguard centres?