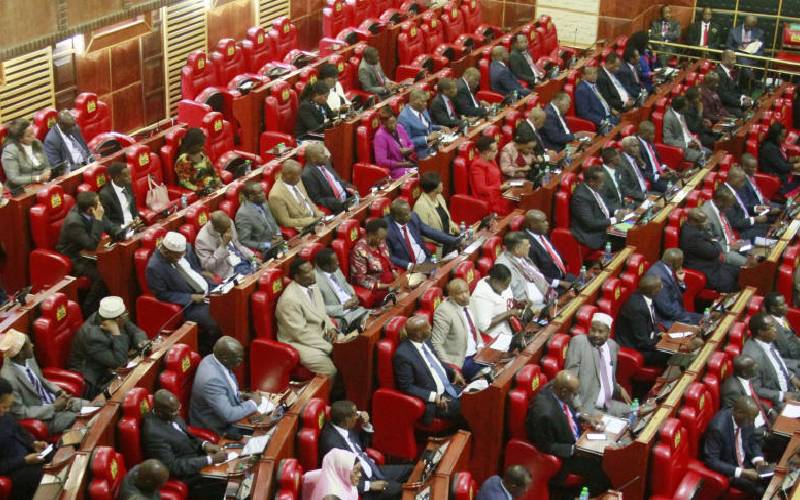 The push and pull between Senators and Members of the National Assembly in the joint Building Bridges Initiative committee now threatens to culminate in two parallel reports.

Yesterday’s retreat by the joint team to reach a consensus on how to prosecute the process on the floors of the two Houses did not yield much as both sides held onto their positions.

Senators led by Minority Whip James Orengo are pushing for amendments to the document while Members of Parliament have insisted that they will not allow any change, "not even a comma".

The National Assembly is now considering writing its parallel report for tabling during a three-day special sitting set for next week, where the lawmakers are set to debate and take a vote on the Constitution of Kenya (Amendment) Bill, 2020.

Joint team co-chair Muturi Kigano (Kangema) yesterday called for patience, saying they expect to reach a deal by the close of the two-day retreat today.

“We are yet to finalise this matter; we will give a comprehensive update as soon as we are done with the discussions,” said Kigano.

A Jubilee senator told The Standard that constitutional experts contracted by the team have declared the proposed 70 new constituencies unconstitutional.

The senator said there was still a split on whether the proposed changes should undergo any amendments before being subjected to a referendum.

“Discussions are still ongoing. The experts have said the schedule on constituencies is unconstitutional,” said a senator in the committee. “The discussion is whether to have an amendment or not.”

Another senator in the committee said they had made “good progress”, but it was too early to conclude whether there was a need for an amendment or not.

Kieni MP Kanini Kega said if senators do not back down on their push for amendments, the National Assembly should consider writing its parallel report for tabling in the House.

“I know that some senators are pushing to have the Bill amended, but that is impossible since it was through a popular initiative,” said Kega.

National Assembly Speaker Justin Muturi had warned that the House will discuss the Bill with or without the report by the Justice and Legal Affairs Committee should the members delay its tabling.

Further, BBI Secretariat co-chair Junet Mohammed disclosed that the planned referendum date had been pushed to July, from June, following a standoff occasioned by MPs’ demands to make amendments to certain proposals.

Mbadi said he and National Assembly Majority Leader Amos Kimunya had agreed on the dates for the special sitting and were set to write to the Speaker this week.

“The special sitting is supposed to be on April 27, 28, 29; that is what we agreed with Kimunya. It was supposed to be this week but there was some technicality,” said Mbadi.

On Sunday, a meeting at Cotu Secretary General Francis Atwoli's home in Kajiado resolved to adjust the timelines to accommodate the delays brought about by the disagreement within the joint team of the Senate Committee on Justice, Legal Affairs and Human Rights and the National Assembly’s Justice and Legal Affairs Committee.

Junet, who is also a member of the joint team, said members are expected to arrive at a consensus on contentious issues at the end of the two-day retreat.

“We have agreed that the referendum should now be in July. We expect the joint committee to dispense with the matter in the next two days,” said Junet.

The initial timeline by the BBI Secretariat was that Parliament dispenses with the matter by April 6 to pave way for two-month preparations by the Independent Electoral and Boundaries Commission for a referendum by June 6.

The two Houses are required to debate the report and the Constitution of Kenya (Amendment) Bill, 2020 before the document can proceed to IEBC and thereafter to a referendum.

The crisis has split ODM's legal fraternity into two camps, with one side led by Orengo and the other by lawyer Paul Mwangi, who served as Joint Secretary to the BBI Secretariat.

Estranged couple have strong, but contrasting views about what it takes to bring up a child.

The sub-location is without power after a transformer at Amoyo, Ndhiwa Sub-county, malfunctioned.

By Macharia Kamau and Philip Mwakio | 8 hours ago