As the country gears to celebrate 50 years of independence, a section of war veterans who fought in East Africa King riffles battalion in the early 1940s along with British East Africa protectorate decry neglect by the government.

Their faces portray the struggle they have lived with 90 years on in ensuring that Kenya remains a sovereign and independent State, but some have never benefited from any retirement pension.

No excuses for Ghana poverty 60 years after independence: president

Most of their colleagues have died due to chronic harsh living conditions, old age and neglect and the remaining countable members have nothing to smile about following their enormous input in collaborating with the British.

Timotheo arap Songok, 96, from Kiplombe area in Uasin Gishu County, was among the brigade selected by the British to fight the war in 1945 among the Italians during the East African campaign and also against the Japanese in Burma.

“At that time, Africans were so strong that the British recruited us to help them fight winning battles against its aggressors,” he explained.

A frail Timotheo, currently battling leg pain and poor visibility, recalls the day when the British officers came to their village seeking to recruit them to the army. “They came to our village in Nandi and ordered for young men. Nobody was supposed to turn down their call because they held high positions. Together with my agemates we obliged,” he said.

He says the favourite tribes by the British colonialists to join the brigade were the Kalenjin, Luo, Kamba and Turkana, because of the perception that they had innate strength to soldier on in the fight.

He explains how the British offered them specialised training at the then Jinja Armed Forces Training College in Uganda before they were enrolled on various brigades to help in the fight.

However, despite their strain and injuries in the battlefield, Timotheo and his friends have never been recognised by the government.

The father of 12 says he retired from the force in 1951, coming home empty handed after a long strain and drain at the hands of the British colonial masters and without pension from the Kenyan government.

“My house leaks heavily during the rainy spell and it be will appropriate for the government to assist me construct a modern one,” Timotheo tells Standard On Saturday.

James Birgen arap Rotich, 90, joined the King African Riffles battalion in 1943 and came back home in 1948 after he failed to renew his service with the British colonialists.

The frail father of four has lately been walking with the aid of a stick due to leg pains following aggressive activities during his heydays as an askari.

“Every time my grandchildren ask me of the life and times as a fighter in the war, the only pride that I have to show them is the medals of honour strapped on the khaki coat I was given by the British officers, nothing more,” he says.

James recalls his former role along other African soldiers given by the British masters to round up war prisoners who were later to be used to work as forced labour in parts of the country.

“In Eldoret, the masters had secured a prison in Kaburwo, Langas area that acted as a stopover for the war prisoners from Italy on transit to other countries,” he said.

He says despite being forced to travel to far places using a steamship and devote their lives on behalf of the colonial master, his retirement benefits were only Sh90.

Karan Kipkemboi Kijo will have to live with the pain on one of his knees after he was mistakenly shot by his partner while in combat at Malaysia in August 1951.

The war veteran joined KAR in 1949 under the command of the British but was discharged from duty after the injury.

“After the fatal shot from my colleague, I was hospitalised at the forces hospital while still in Malaysia until December 1952 when I came to Kenya. I was later discharged by the British doctors’ report in 1954 from my duties,” he said.

Karan revealed that he was paid Sh600 due to his condition, a privilege that his counterparts never got.  He, however, takes issue with the government for paying him Sh500 for his pension even after the Ministry of Finance announced an increment to Sh2,000 a month in the year 2005 through a print media announcement.

Despite being members of the Kenya Armed Forces Old Comrades Association (Kafoka), they are yet to benefit from their efforts that later led to the country’s independence.

British MPs turned the tables on their Home Affairs Secretary Theresa May when they told her that it was wrong for her to propose the ban on miraa. They upbraided May for making “such an important decision” without “evidence or consultation”.

By Tobias Chanji | 4 years ago

By Mercy Kahenda | 6 years ago

By The Guardian | 7 years ago

Revealed: The bonfire of paper at the end of colonial empire 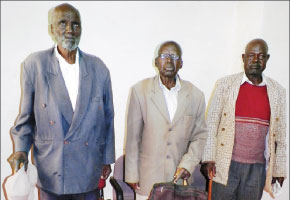 By SILAH KOSKEI | 7 years ago