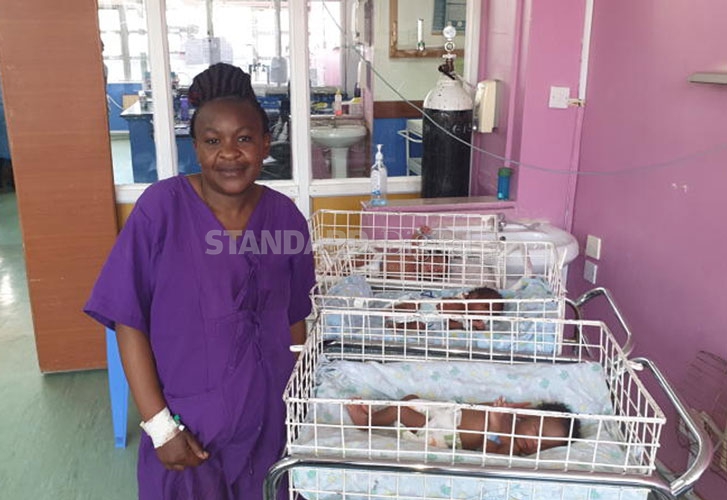 ALSO READ: Katy Perry has 'had it with pregnancy' as she impatiently awaits baby's birth

For eight years since they married, Boniface Nzomo, 39, and Caroline Kathini, 38, have endured the pain of childlessness.

Those who knew them and their underlying matrimonial challenge marvelled at how the two lovebirds managed to hold on to each other.

The triplets were named Larry, Harry and Mutavania. They were delivered through caesarean section.

Caroline could not hide her joy as she narrated how long she and her husband waited to have children.

“These are miracle babies. Our patience and trust in God has yielded blessings we did not even comprehend,” she told The Standard in an interview.

The woman had been informed that she was carrying triplets after undergoing a scan in the late stages of her pregnancy.

“It wasn’t a big surprise because we were informed after I took a scan. But I am particularly excited because God has finally answered our prayers in a wonderful measure of abundance,” she said.

Caroline, a beautician in Machakos town, said many people who knew her had almost concluded she would never bear children.

“I would like to tell others out there who might be struggling to get children that God’s time is the best,” she said.

She thanked their pastor, Lazarus Musyoka and his wife Eunice, for their encouragement, counselling and prayers.

“Those two close friends were used by God to give us words of encouragement and also prayed with us on many occasions for the longest time we have known them,” she said.

Mr Nzomo, an Administration Police officer based in Machakos, was overwhelmed.

“I have no words to express my gratitude to God for what He has done for us as a family. The three boys born to us shall remain a living testimony that God still hears prayers of his people,” he said.

Nzomo, who is confined to a wheelchair after suffering serious injuries in an accident in 2006, said he never lost hope of getting children. “Eight years is a long time without children in marriage but we have never wavered in our hope in God. Finally, we have seen His blessings,” he said.

Brigit Nzau, a doctor at Machakos Level Five Hospital, who had been attending to Caroline, said one of the triplets had been put under care for being underweight, but added that they would all be discharged in the next one week.