Six facts about semen they didn't tell you in sex education

Between The Sheets By The Mirror

ALSO READ: Why you need to give your child the sex talk now 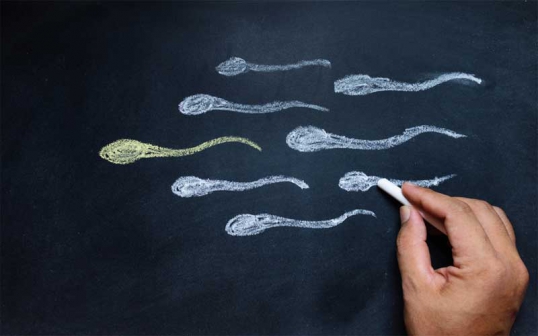 The average fertile man is said to produce 1500 sperm cells a second.

When you consider the majority of the world's 3.5 billion male population will be producing the stuff , that amounts to there being mind-boggling amount of sperm around us at any given time.

But beyond what we're taught about its biological function at school, are there other aspects of sperm worth knowing about?

While a sperm cell may only measure a diminutive 50 micrometers (that's 0.05 of a millimeter), according to Dr Andrew Orr, there's a lot more to them than meets the eye - not that they are visible.

Dr Orr says, "over 60% of fertility issues are related to poor quality sperm, and 85% of miscarriage issues are related to a man's swimmers." But moving beyond the downsides, he goes on to point out there are lots of benefits to sperm that go beyond having a baby - and which they definitely don't teach you at school ..

1. It can help prevent depression in women

As Dr Orr points out, this is really only one to consider when in a healthy relationship, but research has shown women who have unprotected sex or oral sex are less likely to have depression. Sperm contains serotonin, widely regarded as the 'happy hormone'

The State University of New York's study says sperm helps increase oxytocin, prostaglandins and serotonin in women, and suggests this may lead to healthier moods and immune system.

2. It can increase your fertility

Semen plays more than one role other than carrying a man's swimmers to wherever it is they're going.

According to recent studies , it is also crucial in triggering ovulation. Scientists have discovered the protein in the sexual fluid acts as a hormonal signal to the female brain. This triggers the release of other hormones that signal the ovaries to release an egg.

3. It does not last for days

Time to debunk one of the most enduring myths about sperm. On ejaculation inside a woman, a man will release between 300-500million sperm which set off on their way, and most of them will die within the hour. Five to 10 of these will survive and manage to reach the tubes, but more than half won't survive to stick around. Sperm cells have a lot to contend with to survive up to five days.

And for the rest? It's unlikely even these will be able to hang on in there long enough as they are killed by acids, killed by the woman's immune system or get lost in the uterus.

In theory they can last for up to five days, but the odds are stacked against them.

4. People use it in cooking

He says, "Semen is not only nutritious, but it also has a wonderful texture and amazing cooking properties. Like fine wine and cheeses, the taste of semen is complex and dynamic. "

N.b. No one would blame you for ignoring this particular pearl of wisdom.

This is a sperm rumour which is apparently true. Containing zinc, vitamin C, prostaglandins, collagen, vitamins, amino acids sperm is apparently the closest thing we have to an elixir of youth.

So much so, a Norwegian company, Bioforskning, has synthesized the compounds into a facial cream, the aptly named Spermine.

According to Bioforskning, Spermine can delay the ageing process by up to 20 per cent.

6. The first sperm cell under the microscope was earlier than you might think

This runs back to  1677 to be precise, when Antonie van Leeuwenhoek grabbed his microscope just moments after having sex with his wife and got a glimpse of them ...