In Griffin's words; it's utter nonsense

MY MAN
By TONY MOCHAMA | 7 years ago 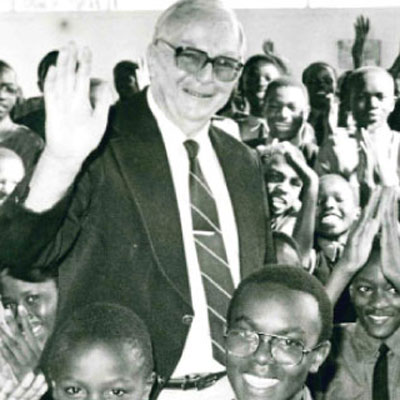 I have been defending men, our peculiar behaviour and mean mannerisms, for quite a while now. But never have I been prouder to take up cudgels than I do for the late great Dr Geoffrey Griffin, who was like a father to us in Starehe, and whom we are still grieving today.

It is one thing for the Wanga woman to talk strange things. Ametoka Kayole. But for an academic like Dr Joyce Nyairo to roll around from the leafy suburbs and talk what Griffin would call ‘utter nonsense,’ and myself bollocks?! Dr Nyairo asked for a bull dance, so here goes.

The first thing Griffin told us in Starehe was that anything against common sense is against Starehe rules. So when she implies the great man was gay, it does not make any sense as surely living in the middle of a school compound, all year round, with tens of thousands of us boys, there wasn’t even the whiff of scandal. Even writing this feels like sacrilege.

But Griffin also taught us loyalty, so if I have to wallow in the mud to defend his memory against the hogs of hogwash, so be it. Tribalism was also unknown in Starehe.

As was bullying, which Dr Nyairo tried to imply was untrue. Because it was an offence punishable by expulsion.

Stealing was also pretty serious, never mind that it is a national culture in Kenya, and once Griffin was dead, some wretched scum raided Starehe’s coffers.

In any case, Dr Griffin’s had no family to pilfer the philanthropy. We boys were his family, as he often, always said. In the most Godly of ways, so God forgive Nyairo.

He strived to get the best of us, whether in the old school way with the cane, but more with his profound words.

Nothing was more terrifying than standing shaking in Dr Griffin’s office, his ice blue eyes fixed on you in a chilly gaze, as he told you in his booming voice and stentorian tones what utter rubbish your life was going to turn out to be, if you kept up with certain wayward behaviour.

Failure wasn’t an option! Dr Nyairo talks about how ‘ashamed’ he made ‘failed’ students feel (while parading ‘high achievers like grade stallions’) but for all the relevance that holds, it might as well be the grumble of a camel in Cairo.

Dr Nyairo ought to know that my proudest moment in Starehe was when I was invited for tea to Griffin’s house in the presence of the visiting and legendary Richard Attenborough who wanted to meet the school’s top student of English and Literature.

Then Griffins deliberately tore (in Attenborough’s presence) into my Math and Swahili grades, saying I was a ‘lad of concentrated but lopsided intelligence.’ We were in Form Four, and the next term, my grades in those two subjects markedly improved.

Griffin was ‘sliced’ round about 1960 of a fiancée who later became the wife of a future AG of Kenya. In the mid-1990s, he met a lady called Kohlenburg, a millionaire, but the nascent romance did not quite work out.

To suggest that he dropped out of school at ‘A’ Levels because a boy called Beecham had ‘cleared sixth grade’ is ludicrous, more so that an aversion to dancing is gaydar.

I have been watching mzungus dance here in Bavaria, and oft wish more of them had developed this aversion.

If Griffins used to rain stones at night in Wamumu on colleagues’ roofs, if Mum Joyce ever comes around to Kayole, we’ll get Wanga to rain rocks on her roof.

For heaping coal on the head of the dead Dr Geoffrey Griffin. Who, to answer Nyairo’s query, was just as gay as Mother Teresa was a fairy. Are you happy?

By ESTHER MUCHENE | 3h ago