My Man By Crystal Okusa 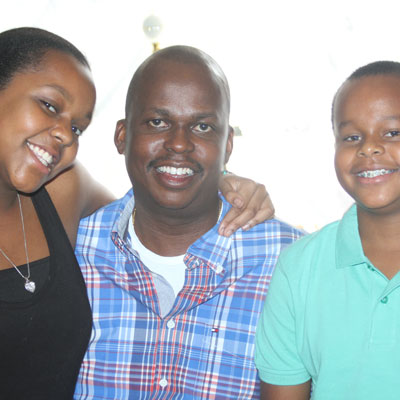 I read somewhere you love drinking and cooking….tell us about your relationship with food.

I have always loved cooking mostly baking since I was a child. When I was around 12 years old, I would bake and sell to my family members at between Sh10 and Sh30.

So obviously, I wanted to be a chef but my father pushed me to study management. I don’t regret, though, since in management too, you are required to know how to cook as well.

What are you currently doing to recruit other men into the food passion?

I have a cook show called DOOF on M-Net every Thursday from 6 pm. It is a fun show where I rope in fellow men; inviting them to cook with me, send them for grocery shopping and allow them to make mistakes without feeling incompetent in the kitchen.

This programme is just to show Kenyan men that they can get in the kitchen and it can be fun. Guys who cook are go getters and are not scared of stereotypes.

Can you tell us a bit more about your culinary background?

I trained at Utalii College in 1990, after which I joined Block Hotels Kenya — Nyali Beach Hotel, Mombasa then later Samburu Lodge, as the food and beverage manager. Thereafter, I became the general manager. Six years later, I quit employment and started Bobs Sandwich bar in Mombasa, in 2001 with some childhood friends and we have made it into what it is today — arguably the most popular bar in Mombasa.

In 2003, we bought Psys Bar in Lang’ata, which later developed into a chain in Nairobi’s town centre, Westlands and most recently at the T-mall. As Psys was growing, we bought Mercury ABC from Java in late 2010, and in late 2011, we started construction of Mercury ‘The Last Drop’ at the Junction Mall.

That is a streak of success, how have you done it?

Putting up a bar is quite costly, so despite how much one would love to go into business alone, it is nearly impossible; so I have always incorporated other investors. In some cases, when you already have a good reputation of a bar or location to work with, resurrecting the new bar to life is not difficult, like in the case of Mercury.

Since your business did not require you to be hands-on all the time, what would you do as pass time?

When I was around 30 years old and Bobs was doing well, I partied a lot. It was scary and I felt I could not live like that. I decided to do something else to limit my free time. In 2001 when retired President Kibaki ascended into power, I was employed as the principal household services manager.

I was in charge of all State Houses and lodges. If he had to leave the city or the country, I would travel beforehand and make sure everything was in place before he arrived. The job was too demanding and I gave it up after a year. That is when I started looking for a new project to start and Psys was born. Along the way, I branched out again and joined Kenya Airways for two years.

Talking of State House and food, what was Kibaki’s favourite food?

Do you hang out at other establishments?

I do, but occasionally because I am spoilt with the treatment I get at my own bars and restaurants. So I would not want to go somewhere and be disappointed.

What are the challenges that come with running entertainment establishments?

Running bars is a tempting business as it involves money and alcohol. To get employees who have integrity is quite a big deal. You need the customers for you to make money, but dealing with them when inebriated is not easy. Also, a lot of times the management partners are men and ego grows with the money.

What are some of the lessons you have picked along the way?

When a bar is full, it does not always mean people are buying, they could be there only to dance. At the beginning, I used to be behind the counter to understand customer trends and if the crowd translates to sales. Middle class is growing quite fast and they have acquired new tastes and standards; so one has to keep up with the growing numbers otherwise, as a bar owner, you will realise you are losing your original niche of clientele.

Has any of the business ventures failed?

Yes, and I lost a lot of money. I have had to close down a restaurant in Mombasa because of location. I tried it for a year but it was not doing well. In the entertainment industry, key things are clientele and location for the bar or restaurant to work.

Besides this success, who is Arthur?

I am very calm and my friends think I am funny. It is not important for me to be popular for owning this or that, it can consume somebody but I try not to let it get to my head. I have grown to not let it define my personality. Despite all these establishments at my disposal, I try not to drink during the week apart from Wednesday when it is date night with my girlfriend.

Do you have a family?

I am divorced but currently in a committed relationship. I have a 12-year-old daughter and a ten-year-old son. I also have a two and