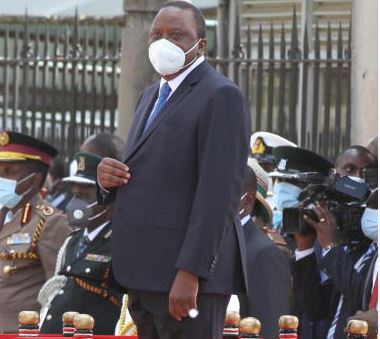 President Uhuru Kenyatta (pictured) has confirmed that learners who are still at home will resume classes in January 2021, amid uncertainty brought forth by the coronavirus pandemic.

Uhuru said: “The gradual and phased re-opening of schools is being monitored at all levels to ensure safety and security of all learners.”

Learners, teachers and all education stakeholders will also know the 2021 Academic Calendar in two weeks’ time.

In his address on Thursday, the president largely covered concerns on the Competency-Based Curriculum, which he said was an exercise not without challenges, but one that has been fully embraced by all education stakeholders.

“I assure this distinguished sitting that the journey to replace the 8-4-4 system with the new fit-for-purpose curricula, is well underway, and refinements are being undertaken in the course of implementation,” he said.

The Commander-in-Chief also added that Kenya has been able to achieve the 100 per cent transition rate from primary to secondary school, for the second year running.

Uhuru further recognised the need for construction and equipping of more dormitories and classes to facilitate easier learning of students.

He directed the Ministries of Education, Transport, Infrastructure, Housing and Urban Development to issue a new set of building guidelines for school infrastructure, “conscious of the fact that significant financial resources will be deployed towards the construction of at least 12,500 new classrooms and related school facilities.”

Kenya has particularly been on a downward trajectory economically this year, what with a ravaging pandemic and a burgeoning debt.

The president reassured that the measures government had put in place at the beginning of the pandemic were aimed at cushioning the economy.

These include the eight-point economic stimulus program to return the economy to the growth trajectory it was on pre-Covid, by so doing, increasing demand for local goods and services, cushioning vulnerable Kenyans, securing household food security for the poor, and creating employment.

Uhuru, however, noted that it was a shame that almost sixty years after independence, a majority of Kenyans living in urban towns were still living in a ‘dignity poor’ environment.

As such, the president hoped that through the newly-formed Nairobi Metropolitan Services chaired by Major Gen Mohammed Badi, dignity will be restored back to our cities and towns.

“Our intention is to reverse this, and the Nairobi Metropolitan Services is a pilot project that has been successful in rolling back the frontiers of this urban indignity,” he said.

The president was issuing his seventh State of the Nation address at Parliament buildings in Nairobi.

It is a unique sitting of both houses- the National Assembly and the Senate, in lieu of Covid-19 protocols.

CEMASTEA awards teachers who have excelled in online learning and training

CEMASTEA awards teachers who have excelled in online learning and training