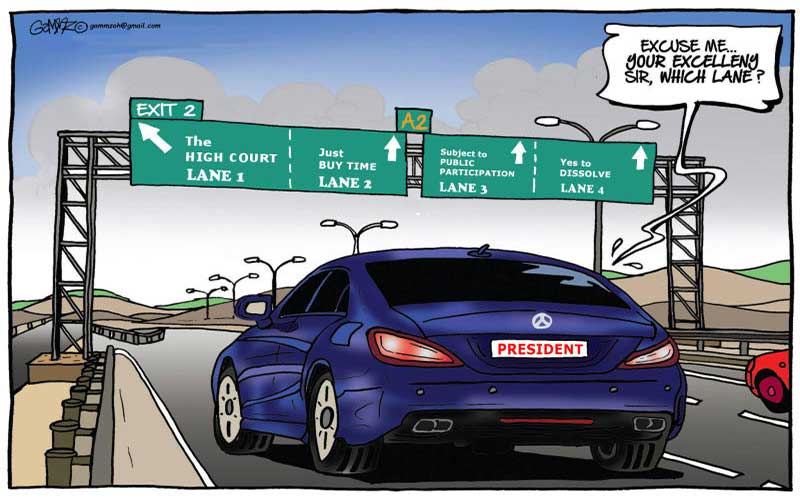 The gauntlet thrown by the Chief Justice, through his advisory to the President to dissolve Parliament over failure to operationalise the two-thirds gender rule has left many dazed. While the matter has since moved to court, the finger pointing has persisted.

In corporate governance, there are several key principles that guide crafting of organisational policies. One is the parsimony principle. This requires that matters of policy must be plain and simple to understand – requiring no interpretation, especially interpretation by experts.

Unfortunately, our supreme national policy document has failed this test severally. Just check how many times constitutional provisions have been taken to court for interpretation. The gender rule in particular has been placed before the Supreme Court for guidance, but with no conclusive direction.

In the current crisis, legal experts are fighting in pitch darkness in their attempt to explain the import of the advisory by Justice Maraga. While some have vilified him for overstepping his bounds, others reason that with six petitions before him, failure to act would have amounted to dereliction of his constitutional duty! Matters get worse when it comes to what the President should do with the advisory. While some legal “experts” argue he is constitutionally bound to dissolve Parliament immediately, others say it is all at his discretion.

Sadly, this weakness of the parsimony principle is not just on the matter of gender rule. During the constitutional referendum debate, among the issues the Church raised, was the ambiguity of the articles on the Right to Life and Right to Family. While we reasoned that huge gaps had been left for future introduction of abortion and homosexuality, the defenders argued otherwise. But no sooner had the Constitution been promulgated than abortionists and homosexuals arose to publicly demand their rights “as provided for in the constitution”!

The issue has been in courts severally, and Bills are currently before Parliament to pursue this evil agenda – courtesy of a weak parsimony principle. Related to parsimony is the principle of pragmatism. This requires that every policy must be practical and implementable. Our constitution requires that no one gender should occupy more than two thirds of all elective and appointive positions in government. Whereas this is fairly straightforward for appointive positions, operationalising it for elective positions is impractical. By their very nature, elective positions are a result of the will of the electorate. To expect a people to make choices in a set way, especially in a democracy, is not pragmatic. Yet, that is the burden our constitutional drafters placed upon Parliament.

Another is the proxy principle, in which members elect representatives to a board to make decisions on their behalf. Such an elected board is often accorded latitude to co-opt extra members, particularly those with special expertise.

However, the number of co-opted members cannot be so high as to significantly dilute the collective will of the elected members. In the gender debate, the Attorney General once constituted a multi-sectorial technical working group to find ways of resolving the stalemate.

The team proposed a top-up mechanism, where members are nominated proportionately on party lists from qualifying political parties to meet the one third threshold. Whereas this would technically resolve the problem, it would nonetheless violate the proxy principle.

Imagine a worst-case scenario, where only members of one gender make it to Parliament through an election. Of necessity another one third of the opposite gender would have to be nominated to meet the two thirds gender rule. This would completely violate the proxy principle. For example, considering that parliamentary quorum is fifty members for the National Assembly, and fifteen for the Senate; nominated members can meet and make laws without the express mandate of Kenyans. This is dangerous, especially if such people represent a certain interest.

While space does not allow us to explore other principles, such as the objectivity principle, suffice it to say that the constitutional crisis we find ourselves in has little to do with the failures of Parliament, Chief Justice, or the President – whatever decision he ultimately takes. The real culprits are the drafters of our Constitution.

They cannot sit pretty while the country totters on the brink of a precipice. They, we must crucify. But in the meantime, steps should be taken to objectively review and refine the document so as to serve us for posterity. Otherwise, we will find ourselves in similar crises.