Just like the law has been bent, BBI could suffer the same fate 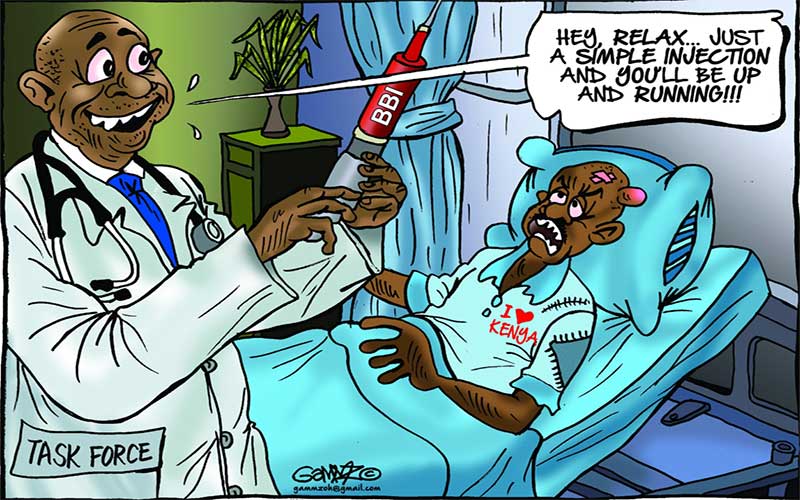 As the Building Bridges Initiative (BBI) reports and reactions dominate the media, it is worth asking if this will change the trajectory of Kenya. Forgive me for being wee cynical here, but Kenya has proven over the years that while we are good at diagnosis, and setting up institutions, systems and structures are really important, what we have sorely lacked is good, honest and pro-people leadership to steer all these ideas through.

Our crises in governance, economy and values stem from a leadership that couldn’t care less for the country and the majority poor, since it has impunity. It is might over right, and about power being a pathway to wealth or to increasing wealth. It’s that simple. And because elections are decided by the counter, rather than by voters, why should leaders care?

Analysts often debate about what is more crucial between leadership on one side, and systems and institutions on the other, in getting a country to move forward and achieve social justice and equity. But that is a false choice, just like the question of what comes first between freedom and development. Development without freedom—including democracy and human rights—is not sustainable nor useful. In fact, it is the same as saying colonialism was “benevolent” which is simply insulting.

Equally, freedom without development and social justice is hollow and provides fertile ground for reducing freedoms and for intolerance to grow. It is ground where crime thrives--at the top with corruption and looting, and at the bottom with robberies and other petty crimes. It encourages divisions and tensions as people compete for the crumbs that the elite leave. And it leads to our perennial problem of people finding private solutions to public problems.

To be sure, the 2010 Constitution provides a lot of potential solutions to the issues for which BBI was ostensibly set up. But because those in power were reluctant to read and understand it—let alone implement it—it was inevitable that crisis would ensue.

Had the courts, and IEBC, been bold and courageous enough to operationalise Chapter Six of the Constitution, the levels of impunity, greed, and callousness would surely be much less. Had the Supreme Court in 2013 the foresight to seriously interrogate the petitions following the unaccountable, opaque, and incompetent elections, perhaps we would have better respect for the rule of law, diversity and inclusion.

Had those sitting in the presidency had the decency, decorum and intelligence to understand the Constitution, we would not have had the massive Chinese and commercial loans burdening us, and the looting that seems to benefit two people most would be stemmed. And we would not have Mombasa County feeling especially discriminated and marginalised by actions of the Executive.

Just like the Constitution has been warped and bent to produce public officers who are loyal to power rather than to the country, we should not be surprised if the same happens with BBI. For it is the same leadership that took us to the precipice that is now supposed to lead us out of it! That is a recipe for disaster. It is like asking a hungry crocodile who has been eating us as we tried to cross the river, to now hold our hand and take us across the same river! Impossible!

These symbolic gestures are quite insulting, coming immediately after US embassy thought that publicly banning Senator Amos Wako from the US was a serious sign of its commitment to fighting corruption. Amos Wako is no angel: I authored the 1993 Kenya Human Rights Commission report about him entitled, “The Fallen Angel” following the huge disappointment in his tenure as Attorney General, what with his global reputation as an international human rights expert.

There are many things for which we can take issue with Wako but making him the poster child for corruption in Kenya is a bit rich. What about the well-known SGR corruption masterminds? What happened to the US $1 billion that can’t be traced from Eurobond? And there is NYS 1 and 2 scandals whose perpetrators remain untouched. Let’s not forget the scandals in the health sector—at the national level even though health is a devolved function—that benefit relatives of particular families.

And surely the US embassy knows about the Kimwarer and Arror dams’ scandals, if it has been following events in Kenya. Would the masterminds of this scandal surely not be better poster children of US resolve? Heck, if we want to go into history, how about the Goldenberg masterminds? Or the Anglo-Leasing monsters who believed that it was their turn to eat?

Given our sordid corruption past and present, we must question why the US embassy chose Wako as their poster child. Yes, he has questions to answer regarding some of his legal opinions and binding decisions that forced us to pay for air in Anglo Leasing and Goldenberg, but is the US embassy trying to hide something?

Anyone following the US impeachment hearings may not be surprised if there is another agenda. For the revelations of bribery, corruption and abuse of office for personal benefit—verbally and in writing—have been rather telling of the Trump regime.

Make electricity accessible and affordable to all Kenyans

Studies done by various credible institutions show that access to electricity is a key contributor to human development.

By Mutiso Kiio | 1 month ago