Corruption: What we must all do to stop the looting frenzy 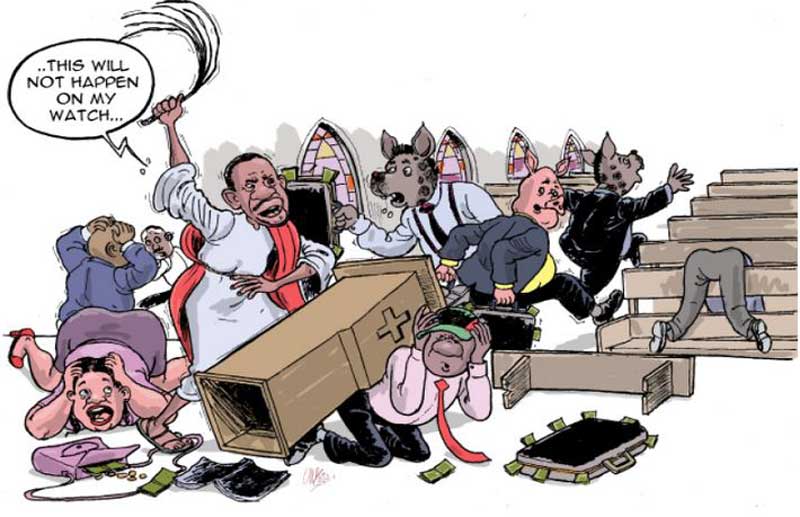 “Let everyone be subject to the governing authorities, for there is no authority except that which God has established. The authorities that exist have been established by God.” Romans 13:1 We are often taught that obedience is a good thing and anger a bad one. Obedience is usually a good thing. Without it, society would cease to function. We need certain forms of obedience in order to work well together. Especially, we need to operate in groups.

We also need obedience at a more personal level. Obedience to our own word. If we make a promise, we must be obedient to it and keep it afterwards. But obedience can also be a bad thing. We only have to look at history to see that. Blind obedience has allowed the killing of innocent civilians in wars and the harming of our planet in search of profits. And, closer to home, obedience has enabled the culture of graft. Obedience to what we saw as normal, something that just happened all around us because it always had. Underlying values We must be aware of the difference between blind obedience to social norms and a considered obedience to our underlying values. Which kind of obedience is advocated in the bible?

There are many verses that advise you to be obedient to authority - like that in Romans above. And that is a good place to start with humility. But, when authority gets it wrong, the bible also emphasises using your God-given powers of judgement rather than blindly conforming. In the previous chapter of that same book: “Do not conform to the pattern of this world, but be transformed by the renewing of your mind. Then you will be able to test and approve what God’s will is—his good, pleasing and perfect will.” Romans 12:2 This verse is saying that individuals must use prayer and reflection to know the will of God and act on it themselves. And then there are some of the most memorable actions of Jesus himself:

“Jesus entered the temple courts and drove out all who were buying and selling there. He overturned the tables of the money changers and the benches of those selling doves.”Matthew 21:12 Everyone around This is not blind obedience to authority. Jesus uses his own judgement to say that just because something has been normalised, it does not make it right. And for Jesus, he is unusually angry. Why? Well, precisely because this was a custom that everyone around him was accepting blindly. The fact that it was happening right at the heart of the religion, in the very temple itself meant that it couldn’t possibly be against the word of God, right? Wrong. Sometimes as humans we are faced with a choice between passive frustration or angry action. It is the anger that spurs us to overturn something bad that has come to be accepted. Remember the anger of Bouazizi, the Tunisian youngster who had come against wall after wall of official corruption in Tunisia. The frustration was overwhelming and he gave up. His passive frustration turning into an angry action, setting himself on fire in a public square, sparking a popular uprising that consumed autocrats in the Middle East? Do we recall the Arab Spring? Public attitudes We are having our moment of anger in Kenya. We need to use it to shake off our obedience to a rotten system of graft. With the recent arrests of public officials, and the changing public attitudes towards corruption, we have to make the most of this moment to overturn the tables and start afresh. The leadership has led the way in this. They have made many enemies over the past months, or so we are told. Rather than make friends, they have made enemies. It is the price we have to pay if we are to get to the bottom of what really ails our society. The symbolism of reclaiming our lost soul is quite something. Though we must take it as an example, it is the wider change that must come from each one of us individually that we yearn. We must ask ourselves, are we willing to go so far as President Uhuru Kenyatta has gone? Would you be prepared to lose a friend to stand up for what is right? In other words, we must all take personal responsibility for changing the deeply ingrained culture of graft. In practice, that means standing up for what is right in our own lives, no matter the personal cost. Ms Lesuuda is Samburu West Member of Parliament