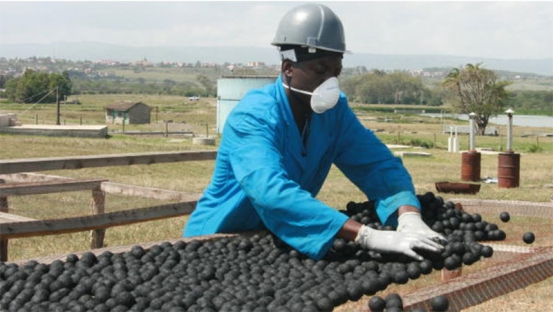 John Njeng’u, a poultry farmer from Kivumbini estate, lights a jiko as he prepares his chicken coop for the night.

His 12-day-old chicks require constant warmth throughout the night for proper growth, a situation that demands he lights and keeps the jiko burning overnight to keep the birds warm.

Incorporating charcoal briquettes made from human waste into his business has instantly cut down the mortality rate of his chicks. Previously, he would lose many chicks that often suffocated because of high carbon monoxide concentration in regular charcoal.

Once upon a poop, now cheaper odourless makaa

“These briquettes have come in handy because I do not have to wake up several times during the night to refill the jiko to keep it burning,” Mr Njeng’u told The Standard.

“A sack of charcoal which goes for Sh800 would last 10 days, but currently the same amount of money can get me briquettes which can last a month yet my chicks are not dying,” he says.

The Sh500 million partnership briquettes-making project from human waste — set up to address sanitation challenges — is a partnership between the county’s public health sector, Nakuru Water and Sanitation Services Company (Nawasso) and a Netherlands-based organisation and other local companies.

The project of fecal sludge management through briquettes making is one of a kind in the country.

Apart from addressing sanitation challenges that contributes majorly towards pollution of underground water, the project also seeks to address forest degradation emanating from charcoal burning in the region especially in Mau forest complex.

The region is also characterised by volcanic soil with very poor load bearing capacity, a situation which contributes to crumbling toilets.

“This poses difficulty in digging as the walls crumble. The toilet facilities also collapse especially when it rains but with the project, we have managed to construct over 5,000 improved pit latrines,” said Reinilde Eppinga, sanitation adviser from the Netherlands-based organisation.

Human waste, the main raw material for the briquettes, is collected from pit latrines and septic tanks by trucks and transported to a waste water treatment plant where the manufacturing takes place.

Briquettes made out of human waste in Nakuru County

By Vivianne Wandera | 13 days ago

By Fidelis Kabunyi | 28 days ago