Residents protest against hanging boulders and narrow road in Kericho 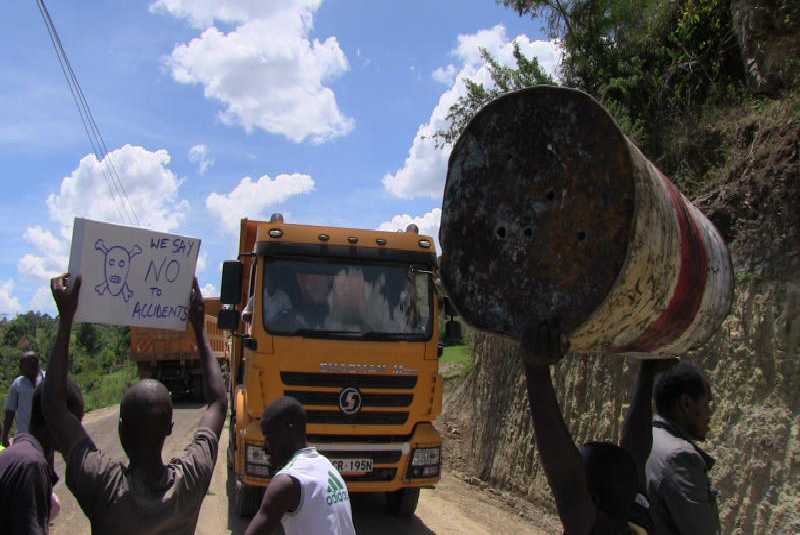 Residents of Kamasian are demanding removal of boulders left by a road construction company, terming them dangerous.

They took to the streets (pictured) in show of opposition against the contractor of Taita-Mutaragon-Liloch-Fort Ternan road, whom they accused of endangering their lives.

“The project manager claimed the company was not allocated money to remove the boulders. In case of the slightest earth tremor, motorist and residents living down the slope will be in great danger - they will be smashed by rolling rocks,” said Rono.

The ward rep noted that the road is also too narrow and had turned into a death trap. He called on responsible agencies to consider expanding it.

“In the latest accident, a police vehicle was involved in a head-on collision with another vehicle and the occupants were left nursing serious injuries,” said Rono.

The MCA led the residents to Intex offices in Barotion where they presented a petition to project manager Robin Martin and Kenya Rural Roads Authority (KeRRA) officer in charge of the project Kelvin Gikonyo.

Gikonyo said a team of engineers had visited the site and sent a report to KeRRA headquarters, requesting funds to clear the boulders.

“The budget we have only catered for the carriageway. We cannot take our machines to clear the boulders because the funds have not been provided,” he said.

He added: "As we wait for more funds from KeRRA, we have ensured good drainage so rain water does not settle there. I have also instructed the team to construct speed bumps at that section."

By stopping our kids from hustling, we're hurting the country

It is unbelievable that parents nowadays fear holidays. Our parents loved it - they got cheap labour on the farm.

By Kennedy Gachuhi and Bradley Sikolia | 6 hours ago