As nature took its course, more than 300 wildebeests drowned at the weekend in a stampede as they crossed the Mara River in the Mara Game reserve, reports indicate.

The Sunday incident was one of the largest single wildebeest deaths in recent history.

Tourists watched in awe as hundreds of the animals died in the crocodile-infected waters of the Mara.

But according to Maasai Mara Chief Warden James Sindiyo, stampede and drowning is part of the migration phenomenon. In the Great Wildebeest Migration, millions of wildebeests dot East Africa’s renowned plains in one of the most thrilling spectacles

How hippo poop is sustaining key lakes in the region

“During the migration, many wildebeests die from the stampede, drowning and even being preyed on. It is a game of the jungle and nature’s at its best. Drowning depends on the route the wildebeests take and the volume of water in the river. The more perilous and deep the route they choose, the more wildebeests are likely to die,” Mr Sindiyo said.

In the many deaths, the carcasses are fed on by fish, crocodiles, vultures, among others.

“These carcasses can sometimes be swept to as far as Lake Victoria,” he added.

“We call them filter routes because it is only the lucky ones that make it... It is part of the game and those that drown automatically do not make it to the next migration. Those that cross over qualify to the next game,” he says. 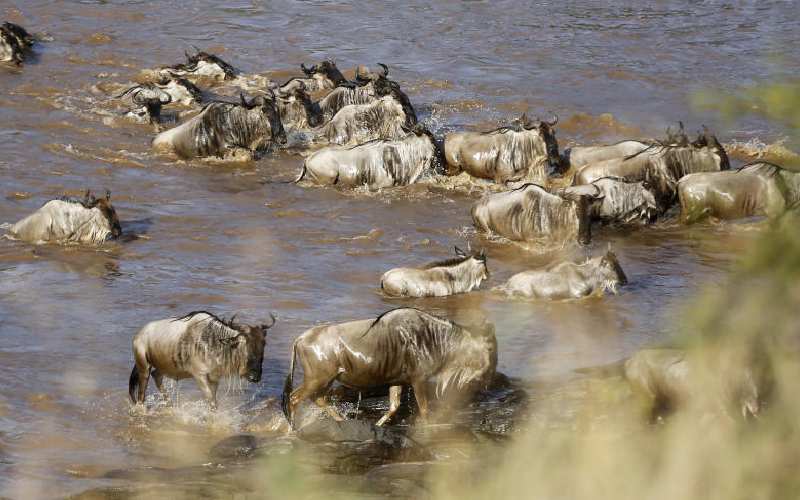 And while some might successfully cross over, they will be hunted, stalked, and run down by predators. Carcasses are worked on by scavenging vultures.

“This is the best time to watch nature unfold right in before your own eyes. That is why wildebeest migration is one of the world’s wonders. It is incredibly magical,” he said.

In the migration, hundreds of thousands of wildebeests alongside zebras follow different routes to the same destination annually in one of the most outstanding natural processions on earth.

Between January and February, another interesting phenomenon unfolds: wildebeest cows drop calves in a synchronised birthing that sees some 300,000 to 400,000 calves born. The season, again, provides a feast for predators.

Absa has been on an aggressive drive to grow revenue elsewhere in Africa following its split from Britain’s Barclays in 2017.