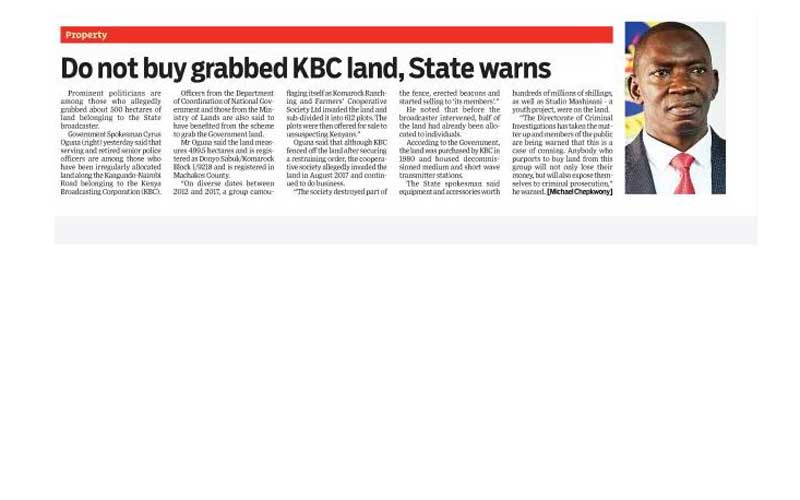 Komarock Ranching and Housing Society has denied claims that it had grabbed land along Kangundo Road from the Kenya Broadcasting Corporation (KBC).

Government Spokesman Cyrus Oguna had warned Kenyans against buying the land, saying senior civil servants were among those who have been irregularly allocated land belonging to the national broadcaster.

“On diverse dates between 2012 and 2017, a group camouflaging itself as Komarock Ranching and Farmers’ Cooperative Society Ltd invaded the land and sub-divided it into 612 plots. The plots were then offered for sale to unsuspecting Kenyans,” Mr Oguna was quoted as saying.

According to Oguna, officers from the department of Coordination of National Government and those from the Ministry of Lands are also said to have benefitted from the scheme to acquire the State-owned land.

The land in question measures 499.5 hectares and is registered as Donyo Sabuk/Komarock Block 1/9218 in Machakos County.

But while addressing hundreds of members and interested parties who turned up for a special general meeting at Helicopter Lounge along Kangundo on Saturday, Komarock Society chair Bernard Maembe said they had valid ownership documents.

“We have read in newspapers that we are being referred to as thieves but we are not. We are the owners of Komarock land by right and we have proof that the land is ours,” Mr Maembe said.

While referring to a recent letter by the National Land Commission addressed to the Director of Survey in Nairobi granting approval for surveying of the land, Maembe said it was wrong for the Government to issue conflicting information on the land.

“The above parcel of land belongs to Komarock Ranching Society having been allocated the same through Land Development and Settlement Board (now Settlement Fund Trustees) and they completed full payment way back in 1981,” reads the letter in part.

The letter, signed by K.K Mutai for NLC acting secretary, goes on to say a sub-division has been carried out resulting into 612 parcels thereby converting them from Registration of Titles Act (Cap 281) to Registered Land Act (Cap 300) Registration Section Donyo Sabuk/Komarock/Block 1.

“The society is in the process of making further sub-division of the remaining portion of land to the rest of the members and the same is hereby granted final approval,” says the letter.

Several members who spoke during the meeting claimed political cartels with connections in Government were behind the new plot to scuttle the issuance of land title deeds.

They said KBC, formerly VoK, was allocated only 24 acres to install broadcast masts which are still intact.

By Peter Theuri Jan. 12, 2023
Real Estate
Off-plan housing 101: The approvals that may land you in trouble