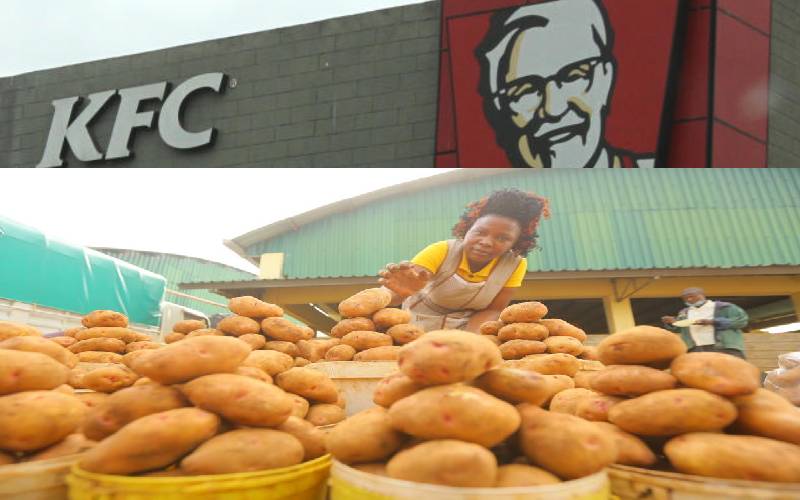 From an audit trail on the troll folks have meted on KFC for their choice of supplier for potatoes, one can be mistaken to imagine this is a nation of saints.

For the record and avoidance of doubt, I have several times and unequivocally on this page advocated for the deliberate strengthening of local productive capacity. I have argued for the adoption of protectionist policies if necessary to safeguard local industries.

To the chagrin of some in well-placed offices, I have voiced my views against the tender-driven, foreign-contractor, foreign-debt, foreign-supplies development model that has cost the local economy heavily. I have listened to very educated folk argue that the foreign contractors are better since they do a better job compared to local ones. Out of this background, at some point, I have wondered if KFC has not become a victim of ‘Njaanuary’ blues.

As a patriotic citizen, I would be very proud to know that the french fries I consume at KFC or any other international outlet are sourced from a farmer from my native Iveti Hills or from my in-laws in Kinjo, Meru. It would be a pleasure to listen to a ‘Waru’ folklore on how people from a far away land fell in love with its unique taste from the slopes of the Aberdares. Such stories shall nourish my soul for I would know that the socio-economic welfare of my generation and many more to come is being securely woven with every passing day.

But I know this is not going to happen anytime soon. This is because I am a good student of the socio-economic and political history of this country. Before anybody raises accusing figures on either party, it would be important to find answers to these three important questions.

One, the company in question is a multi-national corporation (MNC), what does it take to become an MNC? Two, what structures and systems must an economy have to benefit from the modern global economic order? Three, could there be any internal societal issues that have made us miss out on the benefits of global value chains?

Anybody with a basic common sense would understand that to do any form of business across cultures, religions and national geographic or territorial boundaries, there must be some minimum universal standards. You do not need to have gone to any business class to appreciate this fact. To sell in the world market, standardisation is the rule of the game. From my basic business class, companies go global to follow their customers abroad or overseas and to introduce their brands into new foreign markets.

A sacred rule of the game is brand recognition. For instance, looking at the business of KFC that has been the subject of these rants, their primary products Chicken and french fries, have to be cooked in a certain way, to the same texture and flavour. The physical environment for their outlets, equipment, tools and customer experience is the same across all their over 25,000 outlets in over 145 countries and/ or territories.

In the same industry, McDonald’s sells chicken and french fries. While the basic raw materials may be similar, KFC products will be very different from McDonald’s.

Similarly, KFC chicken and french fries are not the same product as those of Chicken-Inn or Sonford’s Chicken and Chips. For those that understand branding, brand is not a question of the physical hardware only. It is also a question of the image, trust, reliability, consistency and value proposition in the mind of the target customer. Any good entrepreneur will only make a product with a particular customer in mind.

Even businesses that sell chips locally, they don’t just buy any potatoes. MNCs are not only accountable to local laws on where they operate but also are bound by laws of their home countries. It is common knowledge that in this country we live purely by grace when it comes to food security. Tonnes of evidence exist on official government reports, mainstream media and informal community channels on how toxic agricultural produce finds its way into our dinner tables. International investors consume this evidence when they chose which markets to go to.

Part of going global is for international businesses to establish synergies in whichever markets they set up in. So, it is common practice to find them banking and sourcing supplies from businesses that they have worked with before in other markets. While it is good practice for MNCs to support local producers, that can never be done at the expense of their quality specifications. In 2021, the KFC brand turnover was estimated at US$5.43 billion or about Sh624 billion at the current exchange rates.

Thus, with only about 35 outlets within the East African region, our market will be insignificant within their global value chain. However, within the local economy, the 24 or so outlets not only mean several households losing their livelihoods, but also another MNC exiting the local market. This may hurt Brand Kenya in many ways than the social media trollers can imagine.

A quick check on what it takes to run a KFC brand shows that it costs about US$1 million (Sh115 million at current exchange rates) to establish a single outlet/ franchise. Why will the brand come at such a premium price? As part of the global economic system, the more important question to ask is: why are we not creating business empires that can dominate the regional market, leave alone the global market? Last year, I demonstrated here with African Union (AU) statistics how the local economy has lost dominance in trade flows within the region. As late as Christmas eve, Kenyan officials were at loggerheads with their Ugandan counterparts over imports of basic agricultural produce. The question is, when did imports of potatoes by a global brand become a crime when we are importing eggs, milk, oranges and sweet potatoes from our neighbours to whom we exported to in yester-years?

How come nobody is complaining when maize and sugar is imported from as far as Brazil and Mexico, with duty waivers, when the same produce is rotting with farmers in Rift Valley and Western parts of the country? Why doesn’t the government buy the same potatoes to distribute as relief food to hunger stricken parts of the country?

From this desk, the hard truth that nobody wants to confront is the engine of global economic systems. Global brands are built on integrity and trust. I am on record here that our economic mediocrity is not a standard that we can export to the modern world economic order. It amazes me to see the same people who would elect their national leaders purely based on ethnic affiliation or because of Sh50 and food distributed for political reasons will cry foul in this matter. As postulated in my December 31 article, economics is not an outcome of abstract theories. Economic policies have significant real life implications on society. In democratic systems, the quality and calibre of elected leaders dictate the national policies. This includes fiscal, macroeconomic and governance policies. It is thus preposterous to expect politicians who get elected for dishing out handouts not to demand the same from the economic actors that they govern.

It is a widely acknowledged fact that cartels rule almost every single sector of our economy. A long time ago, a very senior government officer best described it as a ‘bandit economy’. For heaven’s sake, I doubt KFC even controls 1 per cent of the local potato market. How can such an insignificant player be the source of the problems of potato farmers?

In Galatians 6:7-8, the Holy Scripture warns us that we’ll reap only that which we’ve sown. In African folklore, there is something they call…..Karma! A blessed 2022.

Kakuzi braces for dip in earnings amid low exports

Agricultural firm Kakuzi expects its earnings for the full year ended December 2021 to fall to levels seen at least six years ago.

Ministry of Energy gazettes the approval of new electricity tariffs that will see a reduction of 15 per cent in bills.

By Mesh Alloys | 3 days ago

By Ruth Ferland | 3 days ago