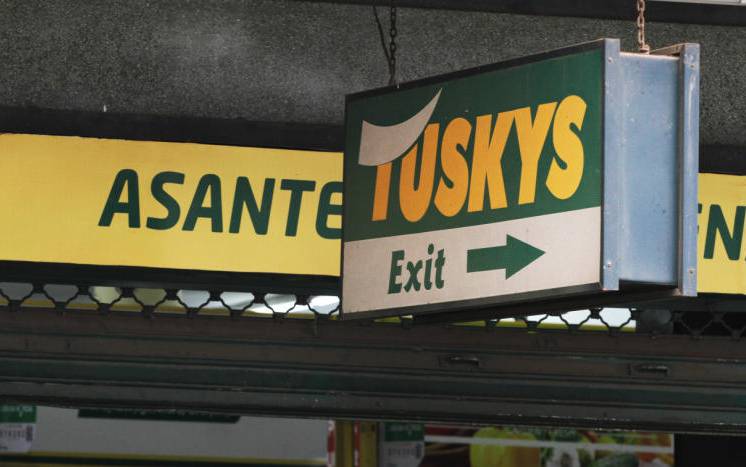 Retail chain Tuskys Supermarkets has fired over 200 workers and shut down two branches in Eldoret town as financial woes rocking the supermarket deepen.

The retailer has now been left with one branch, at the Zion Mall in Eldoret. Doors at the Komora Plaza and Uganda Road branches have remained shut for days now as auctioneers prepare to sell the stock at the latter branch next week.

Yesterday, tens of the sacked workers led by their union chairman (Eldoret and Western region) Cyrus Chirchir held a demonstration outside the Zion Mall branch, protesting delays in payment of their August and September salaries.

According to the unionist, the troubled retailer had promised to clear all pending dues by yesterday. However, there was no indication of paying the sacked workers on time.

“We want our August and September salaries and deduction during the Covid-19 period paid. We had been promised that it would be paid at the end of September. We will be protesting outside the only existing branch until we are paid our dues,” Chirchir said during the protest.

“One of us asked when his terminal dues would be paid and was told to come August next year.”

A sacked employee Edward Ongati said the retail chain had promised to pay the 20 per cent deduction effected in April after a successful negotiation with their union in June but later backtracked.

Mr Ongati said the news of their sacking was made at night through telephone calls from the management.

“A few days ago, we were called at night to pick our termination letters the following day. They used Covid-19 pandemic as an excuse for paying our salaries and other dues,” he said.

“Some of us have worked for this company for over ten years – when the Tuskys had only ten branches across the country. It now has over 50 branches,” he added.

Kenyans will now be required to start servicing their loans as they did before Covid-19 pandemic struck.