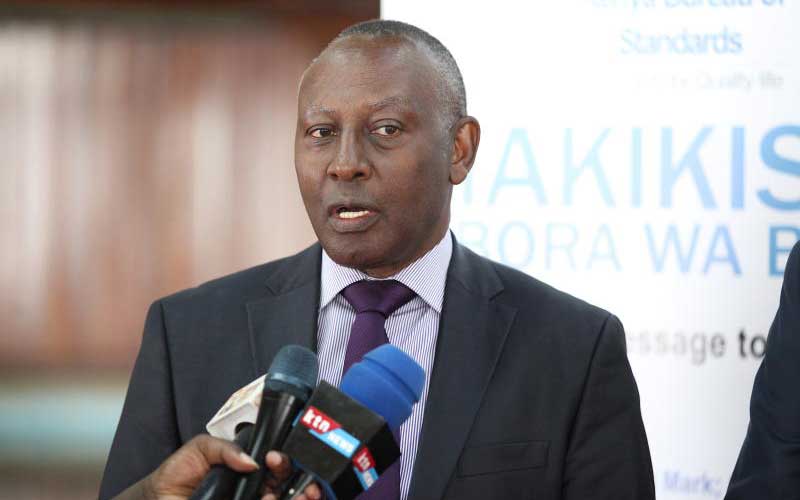 Former KenGen Managing Director Eddy Njoroge (pictured) has pledged to be a global ambassador for the value of standards as he took over the helm of the Geneva-based International Organisation for Standardisation (ISO).

He becomes the first African to hold the position. Njoroge takes over the leadership of the 73-year-old agency from Canadian John Walker after he was elected in October.

Njoroge said that during his two-year term, he will promote use of harmonised global International Standards as instruments to support free and fair trade. To achieve this, he intends to champion, promote and lobby for the use of standards.

The second priority will be to position ISO standards as strategic tools to revitalise the industrial sector, through championing development of standards that specifically address current market needs.

“The Fourth Industrial Revolution is here with us, bringing many shifts and disruptions in its wake. ISO standards are the solution to many of these challenges, and an enabler of opportunities, as they represent global unanimity on a wide range of issues and disseminate the latest technology from which the industry can leverage,” he said.

For two years, Njoroge will chair the ISO Council, which works like the board of a company, made of 20 countries represented by their respective standards’ bodies.

Membership to the council is rotating and any of the 164 countries that are members of ISO can be council members. However, the United States, United Kingdom, Germany, Japan, France and China have permanent representation.

Past ISO presidents have been from developed countries, except in three instances when there was one from Brazil and two from India.

The former KenGen boss was elected unopposed during last year’s ISO General Assembly in Geneva, Switzerland. He had, however, missed the presidency two years earlier, when in 2016, Njoroge had vied but lost to John Walter.

Njoroge had been nominated as a candidate by Kebs. This is usually the case for the ISO presidential candidates – they have to be fronted by their home country’s standards body.

Currently, only a handful of countries from the developing world are involved in the making of standards and this has seen many unable to meet these standards and hence locked out of global trade.

Njoroge said he worked in a chemical manufacturer, where the key selling point was about quality, not price.

Kenya presses on with coal energy despite mounting concerns