The company on Saturday struggling to repair a section of the line at Kibos in Kisumu, where a man has been siphoning and selling diesel to suppliers without detection for a long time.

This is as police hunted for the man who had connected his own pipes to the main KPC line through an underground tunnel, just adjacent to the Kisumu-Kibos road.

It is suspected he may have made millions from this illegal connections since his metal pies had become rusty.

Just a year since crooks punctured the pipeline christened Line 6 at Muhoroni, crooks had punctured the same pipeline in Kibos a few kilometers off Kisumu Town and could have made away with millions worth of refined fuel.

Speaking at the Muhoroni scene in June last year, KPC operations and maintenance manager Peter Mbugua admitted the detection system in place could not detect seepage of up to 10 per cent of the product pumped at high speeds.

KPC officials responding to a reported leakage from the pipe stumbled on a freshly installed oil siphoning network that could have dwarfed the Muhoroni racket.

An over 1.3 kilometre pipeline led to an incomplete light cottage factory from where the cartel would have operated a loading ramp or pumped the fuel further to a nearby petrol station, according to investigators’ preliminary reports.  A 70-metre tunnel from a remote napier grass planation which also served as a tree nursery led to the 6-inch high velocity pipeline.

The two pipes leading to the loading ramp ran parallel to a Kisumu water service provide line, a move that could have been calculated at masking the operation.

Kisumu Depot manager Herman Munga explained that from their preliminary observations, the crooks were using the shed inside plantation to access and control the valve on the high pressure line.

“We think the pipes they were using to ferry the fuel down to the planned loading bay gave burst under pressure, exposing the syndicate,” he said.

They dangerously waded into flooded fields with jerrycans to scoop the fuel in Kibos, oblivious of the danger they were walling into. 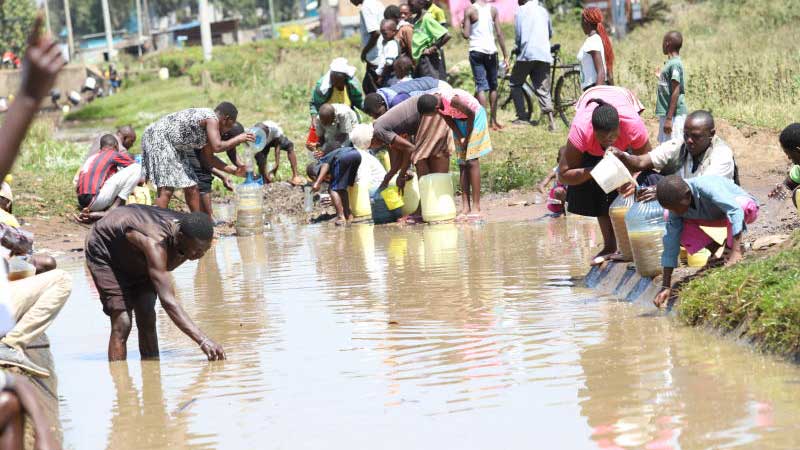 Police had to drive away the residents had arrived with containers to help themselves to the oil sipping from the Nakuru-Kisumu pipeline yesterday evening.

The KPC managing director Joe Sang yesterday said in a statement it had rushed engineers to the scene to repair the pipeline.

The company’s safety and environment team later took over the site to prevent the product from spreading further.

“We urge the residents who are in close proximity to the leak area to immediately move to safer areas to enable KPC undertake the repairs to minimize danger,” said Sang,

The company, he said, was working with the police to trace the source of the leak and arrest those behind the racket. A compressor use in the racket is in police custody.

Kisumu Central OCPD Meshack Kiptum said investigations had commenced and the owner of the two parcels of land were being pursued, as was the trader behind the racket.

He said the spillage will not affect supply in the region: “We assure all our customers and Kenyans at large that this incident does not affect our stock levels. We have sufficient stocks for all the grades across our depots countrywide. We will continue to share regular updates with regard to this incident”.

Another of Atul’s big dreams tumbles

Between 2008 and Friday, Nakumatt has lost three major stores, including Ukay, Downtown and Thika Road