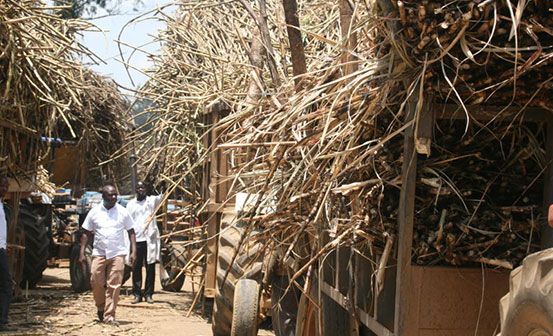 Kenya’s sugar industry could be headed for a major crisis following a biting scarcity of cane.

The shortage has seen most sugar millers operating at below their normal capacities and have now resorted to cane poaching, sparking bitter rivalry among themselves.

Kenya Union of Sugar Plantation and Allied Workers (KUSPAW) Secretary General Francis Wangara on Wednesday warned of a possible crisis unless farmers are facilitated to engage in cane development.

"Lack of raw material is more serious than lack of market. Better we struggle to get a market to sell our sugar bulk in stock than to fight for cane to crush," he told the millers.

In Mumias and Nzoia, the millers decried rising cases of cane poaching which has led to low production of sugar.

According to Mumias Sugar Chairman Dan Ameyo, the firm is struggling to get the amount of cane required to operate optimally, leading to poor sales.

His sentiments were echoed by Mr Wangara who said most sugar millers risk grinding to a halt in the next few months due to lack of raw materials.

The problem is compounded by the fact the four per cent levy that the Government had advanced to farmers for cane development was withdrawn from the budget.

Kenya is divided into five sugar zones with milers restricted to the area they can source cane from.

However, the licensing of new millers in some of the zones has resulted in constant wars due to cane poaching.

Mr Obado stirred up the debate on the levy, saying the State should either reinstate it or allocate money to counties for maintenance of roads or for cane development.

He said the levy is the largest source of subsidised credit to growers.

Mr Obado, who is also the Council of Governors’ Agriculture Committee Chairman, said the levy was withdrawn at a time when the industry was facing an unprecedented raw material crisis.

His Kisumu counterpart, Ranguma said production costs are constantly on the rise and the State should, therefore, move to cushion farmers from further losses.

The CS said the State was ready to meet stakeholders in the sugar sector to find alternative ways of plugging budget shortfalls following the removal of the tax charged on all sugar millers.

He said the removal of tax, charged at four per cent of the value of sugar, was a proposal from stakeholders and the Agriculture Ministry.

“It was clearly a stakeholders’ cry that farmers were not getting the full benefits of their labour,” said Mr Rotich. The governors said the tax was eating into the farmers’ income along the whole sugarcane supply chain, but added that the State could review the decision in the interest of farmers.

The tax was the only source of loans for cane development and funded the building of roads and bridges in the sugar belt besides financing subsidised fertiliser.

The Government had in previous years resorted to the levy to raise money to bail out the struggling sugar millers, including the troubled Mumias Sugar Company.

In recent tour of the sugar belt, Agriculture Cabinet secretary Willy Bett said the ministry will look into ways of reducing the 16 per cent VAT charged farmers for every tonne of sugarcane transported to millers to increase their earnings.

The Direct Pay Online Group, an online payments service provider in Africa, is acquiring 100 per cent equity in Virtual Card Service (VCS) in Botswana and Namibia.