A man was today arrested at the Windsor golf resort in Nairobi as a meeting between the Independent Electoral and Boundaries Commission (IEBC) with presidential candidates in progress.

The man, now identified as Julius Kamau, had allegedly wanted to present a petition to the candidates asking them to commit that they will not organise street protests but will, instead, move to court should they contest the presidential election results.

He was bundled out of the hotel by security guards attached to the candidates.

Kenya Kwanza Presidential candidate William Ruto arrived about an hour later after the incident and met Odinga and his running mate Martha Karua just outside the venue of the meeting.

It isn’t the first time Kamau has been captured protesting at public and private functions. He has become a common feature in demonstrations held mostly in the city. 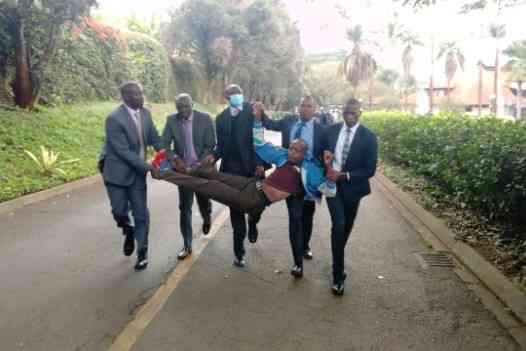 He was last captured causing drama at the Bomas of Kenya when IEBC was again meeting presidential candidates before settling on the final four.

Previous article
Crisis as nearly half of NSSF staff to retire